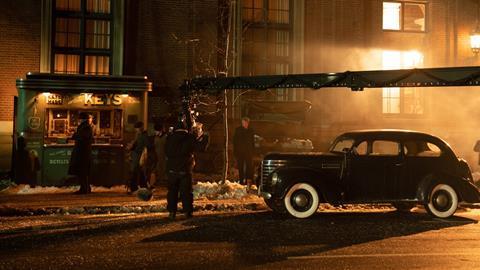 Behind the Scenes of Guillermo del Toro’s Nightmare Alley

Director of photography Dan Laustsen explains the thinking behind the seductive visuals of the neo-noir feature. 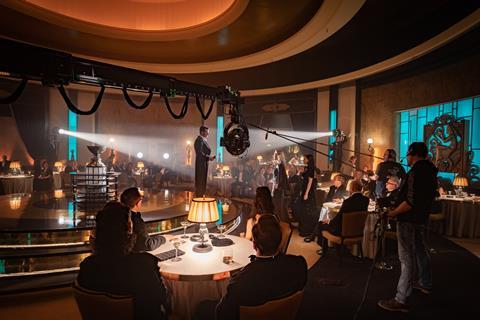 Set in the 1940s, the film moves between a seedy traveling carnival and the city of Buffalo on the US border with Canada, where Bradley Cooper’s grifter Stanton Carlisle finds himself locked into the orbit of Cate Blanchett’s psychiatrist Lilith Ritter.

“We use smoke and rain and steam a lot in this movie in the background because as much as set design or colour these atmospheres create a third dimension to the image,” Dan Laustsen

Del Toro was less attracted to the noir trappings of the 1947 film of the same name than the original 1946 novel by William Gresham which contains aspects of psychosexual, mystery and magic. His screenplay (with Kim Morgan) also draws on Gresham himself whom the director has described as a truth seeker “like The Fool, the Tarot card.” The author committed suicide in 1962. 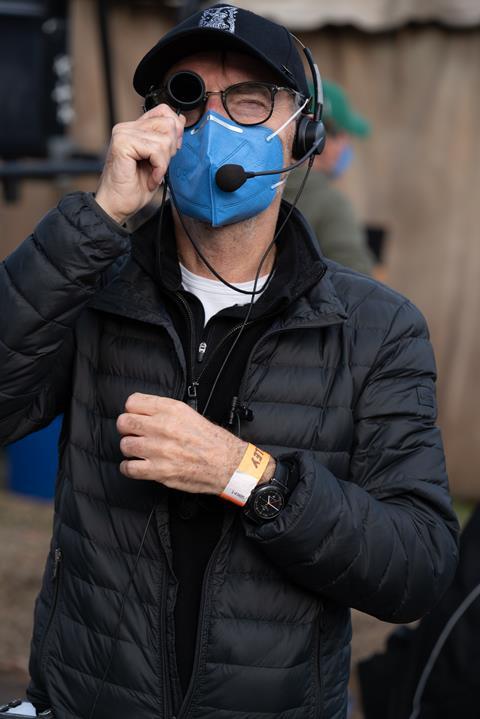 Despite having the mechanics of the noir genre including an icy femme fatale and characters doomed to their fate, Nightmare Alley is conceived as having a “dreamlike quality accomplished through the frame of a film noir,” Del Toro told Simon Mayo on Radio 5’s film programme.

Laustsen tells IBC365 that discussions with Del Toro started from mood boards for a story that is awash with moral decay.

“We never talked about noir explicitly, but it is staged in a very classical way like a 1940s movie,” he continues. “The first time you see Cate she has to be this very powerful and mysterious and very beautiful figure which to me meant using direct single source lighting. You can say it’s noir but it’s more a classic Hollywood style. I wanted to light Cate like a film diva.”

This lighting design required the camera and the actors to meet their marks very precisely, down to just 2cm, according to Laustsen.

“We have this single source keylight that was moving together with the camera. If Cate is a little too close to the light we won’t have the shadow on her face but too far away and she’ll be too dark. The light needs to hit her face precisely and not hit the background.

“The camera is moving a little bit and the actors are moving a lot so it was like a ballet dance between lights, camera and actors. I’ve never done this before. It’s a very technical but powerful way to work.” 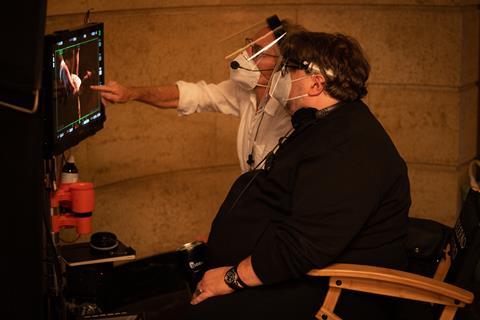 There is a deliberate “artificiality” to the lighting in the sense “you don’t know exactly where it is coming from” to support the unsettling sense of mystery. Similarly, the filmmakers altered the dimensions of Lilith’s office and designed sets with corridors and ceilings to hem the characters in.

“Her office was much smaller in the beginning but we decided to build it much larger and to have the camera shooting wide from a low angle so we can see the ceiling. We lowered ceilings too to enhance this feeling of our characters being trapped in a box, hiding in the shadows, from which they couldn’t escape.”

Early discussion about framing in the boxy 4:3 ‘Academy’ ratio was dropped in favour of widescreen, a scale emphasised by shooting large format on the Arri Alexa 65. This came into its own in the more expansive opening landscapes of the carnival for which the production built massive sets and Lausten populated with 300ft cranes for high wide angles, keylights and smoke machines.

“We use smoke and rain and steam a lot in this movie in the background because as much as set design or colour these atmospheres create a third dimension to the image,” says Laustsen, who used similar effects on John Wick 3. “Here, we use a lot of steam, particularly when we first see the carnival. Steam disappears quickly and it tells you that this story is not quite real, that everything is a little insecure. It’s not quite horror but it contributes to suspense.”

In contrast to the scenes in Buffalo, the lighting here is a little warmer and softer and less direct on the actor’s faces. The colour palette was built from a background of “steel blue” which Lausten says he and Del Toro first employed on Mimic. 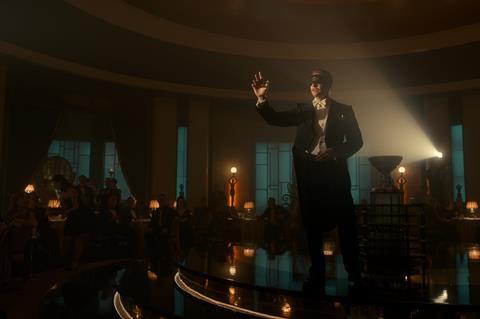 The lighting design required the camera and the actors to meet their marks very precisely, down to just 2cm

“We like that colour but the thing about steel blue is that you have to be pretty even with exposure otherwise the colour jumps around.”

Laustsen introduced production designer Tamara Deverell to Danish portrait painter Vilhelm Hammershoi as pointers for the composition of interiors while Deverell drew from colours inspired by Matisse for the carnival.

Like 2021 Oscar-winning film Parasite (and the ‘Justice Is Gray’ version of Zack Snyder’s Justice League), Nightmare Alley has also been released in black and white. Arguably this version is more in keeping with the noir look.

“You don’t need to see everything. You can feel what is going on. To me, that’s a great example of how you can use camera and lighting to tell the story,” Dan Laustsen

“It’s difficult to shoot for both colour and black and white but we shot as a colour movie and thought about how we could make the contrast work better for the black and white,” Lausten explains.

“I shot with a diffusion filter inside the camera which helped a lot with the black and white version because you can have the highlights burning a little a bit more.” 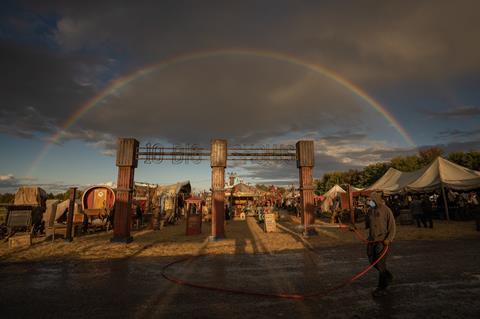 The carnival set’s colours were inspired by Matisse

He went back to the raw files and “art-directed” the black levels, grey midtones, contrast and highlights. Laustsen believes audiences will experience this version as a more “brutal” telling of the story.

Had Del Toro managed to make the film two decades ago as he had wanted to (but couldn’t land the rights) it would have looked a lot different.

“This movie required a certain sobriety in the use of directing tools that only comes with age,” he told Radio 5. “I’ve [since] shed some of the whimsy and pageantry to balance the darkness of the tale with the exquisite beauty of the world creation.” 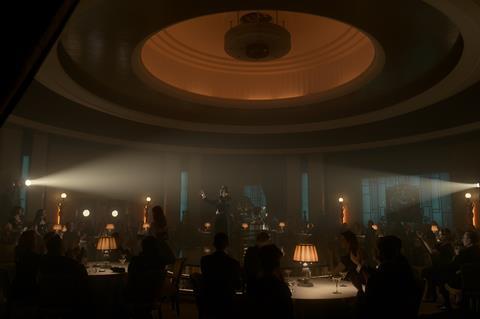 Laustsen, who has been with Del Toro on that journey, picks out one scene as an example of the filmmaker’s more formal (if not quite yet austere) storytelling style.

“We have a scene with Bradley Cooper in a hotel room and use low angle wide shots framing him against the ceiling. He is trapped in this room, alone in the blackness. When we came to shoot this we could have played with light on his face as we do elsewhere. His character is very dark, and we do use deep black shadows with one side of his face in the light but always tending towards the darkness. But in this scene we chose to light him totally in silhouette. You don’t need to see everything. You can feel what is going on. To me, that’s a great example of how you can use camera and lighting to tell the story.”