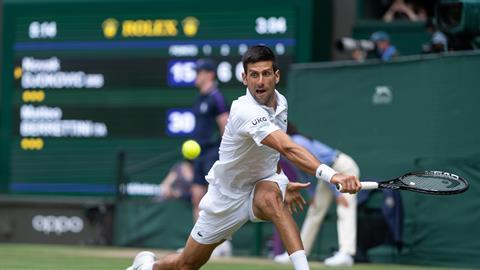 Behind the Scenes: The Championships, Wimbledon 2022

With more matches broadcast than ever before, some in 360-degrees and plans for an UHD HDR upgrade, Wimbledon braces for two weeks of global attention.

With no Wimbledon in 2020 and the event only operating at half crowd capacity in 2021, the Championship is back to full strength this year - and then some. 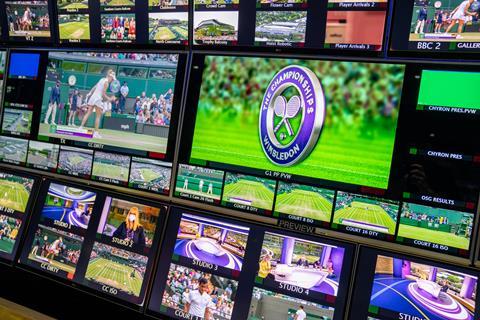 Broadcast Centre and facilities at The Championships 2021. Held at The All England Lawn Tennis Club, Wimbledon. Day 7 Monday 05/07/2021

For the first time, every match from all 18 courts across every single competition will be broadcast – men’s and women’s singles and doubles and mixed doubles. In addition, every match from invitational events, 14&U Juniors and wheelchair events is covered too, along with extended coverage of the qualifying tournament. It’s a fitting celebration for the centenary of the All England Lawn Tennis Club’s move to its current site at Church Road, SW19.

“From a broadcast perspective we were already at a high benchmark,” says Paul Davies, Head of Broadcast, Production & Media Rights at AELTC, which produces the host broadcast. “But we’ve made good on our philosophy of being able to deliver player specific coverage to every broadcast rights holder [spanning some 200 territories]. So, that means multi-camera junior match coverage and even commentary on those matches.”

Coverage of qualifying has been upgraded from one court to a multi-court presentation. “We had a single camera on one court - taking a master shot. But by using a single camera with a couple of RF cams we can now switch courts quite easily. It’s not just British players either, but a global offering. There’s always great passion at the qualifying competition.” 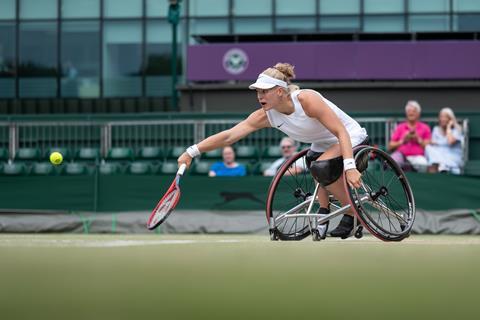 Diede De Groot (NED) playing against Lucy Shuker (GBR) in the quarter-final of the Ladies’ Wheelchair Singles on Court 17 at The Championships 2021. Held at The All England Lawn Tennis Club, Wimbledon. Day 10 Thursday 08/07/2021

This year is also the first to see live action on the middle Sunday, with no break in 14 days of competition. The middle Sunday will also feature a special centenary programme, featuring many past Wimbledon champions live on court.

That additional load brings its own challenges for the broadcast and media teams. “We never know how long a day’s play is going to be so we have to be careful to manage people’s times during that week,” Davies says.

In terms of workflow, each court is essentially treated as its own production, with 18 OBs of varying sizes with their own replay EVS operating simultaneously at peak.

The ability to increase coverage is partly based robotic camera systems that have been in use at seven courts since 2018. Eleven of the 18 courts at Wimbledon are crewed by camera-operators and seven are robotic, using cameras augmented by Fletcher Group’s Tr-ACE system. This uses LiDAR sensing to pick up details on each player and then creates a 3D model of the match, allowing the robotic camera heads to track the action without the need for human intervention. 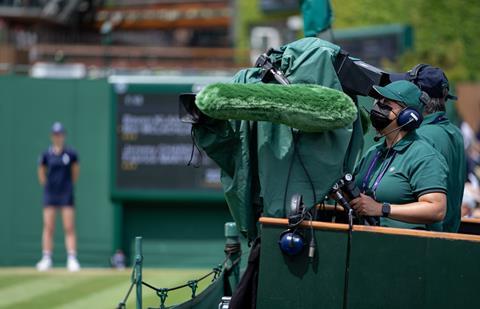 Broadcast camera operators in action on the southern outside courts at The Championships 2021. Held at The All England Lawn Tennis Club, Wimbledon. Day 7 Monday 05/07/2021

Matches that require more storytelling can be directly controlled by a camera operator and a director in the onsite broadcast centre. They can vision mix and tighten or widen the automated shots as needed.

NEP is in the final year of its five-year contract as facility provider to the Championships and is outfitting the central broadcast facility, which is part MCR and part derigged galleries, as well as individual trucks for production of Centre and No.1 courts.

“It keeps the technology in the truck, which has everything in it to produce that court including a prebuilt gallery,” explains James Muir, Broadcast Technical Manager. “It also provides redundancy. On finals weekend, for example, because we have the truck on its own in the compound hardwired to an uplink vehicle, we could turn the entire broadcast centre off and still get Centre [court] to air.”

In terms of workflow, each court is essentially treated as its own production, with 18 OBs of varying sizes with their own replay EVS operating simultaneously at peak. All match footage is centrally ingested along with comps and isolated camera reels – all the material you’d expect from a major sports event - made available over an EVS network to broadcasters onsite.

118 x cameras on all courts

4-5 cameras each on the other courts)

5 x cams in the press area (for press conferences)

Netcams on Centre & No.1 courts

4 railcams – two on outside courts plus Centre & No.1

New POV cams on either side of the Umpire Chair on No.1 and Centre courts

New low-reverse cameras on 5 outside courts

All the above supplemented by additional rights holder broadcaster positions

For rights holders offsite, live match feeds are contributed under IMG management over Eurovision, Globecast, ESPN (for LatAm) and Telstra (for Asia) networks. Everything else, such as wire-cam shots, ENG, beauty camera loops, ISOs and highlights, is fed into NEP Mediabank, a cloud-based media management platform. 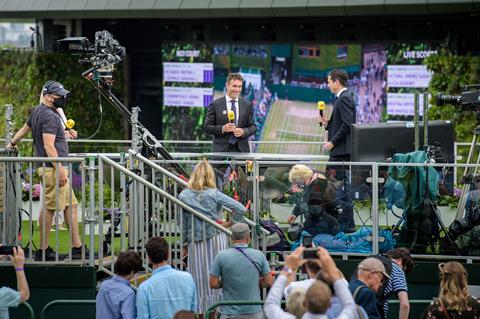 Tim Henman at BBC Outside Broadcast position on Aorangi Hill during The Championships 2021. Held at The All England Lawn Tennis Club, Wimbledon. Day 11 Friday, 09/07/2021

“Instead of clogging up storage and the bandwidth, we send everything except match feeds over Mediabank,” says Muir. “Rights holders can record any match feed they want on their own systems at home. We have some broadcasters who generate their own workflow, where they will remote access the content that is here but use their own file transfer to get the content offsite. Our view is we don’t want to be prescriptive. So, there is a complete onsite solution, an onsite file delivery with offsite browsing, and an offsite browsing with offsite file delivery.”

Davies says the overriding goal is to ensure that rights holding broadcasters have all the assets they need to produce the Wimbledon experience that viewers have come to expect. This detail extends to enabling a broadcaster to book a beauty cam and direct it themselves, for example, zooming a wire-cam from across the practice courts into their studio or stand-up location.

Centre Court is being produced in UHD HDR in a continuation of a format first introduced in 2018 but is still being produced separately from the HD feed. This is a hangover from the days when the overriding concern was to protect the HD feed, which the majority of the audience was watching.

That changes from 2023, when every manually crewed court will be delivered in a single HDR workflow. This year affords a chance to test those workflows using court side systems cameras that have been standardised on Sony 3500s. 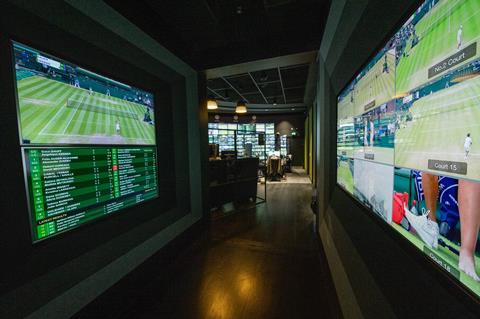 Wimbledon Broadcast Centre and facilities at The Championships 2021. Held at The All England Lawn Tennis Club, Wimbledon. Day 7 Monday 05/07/2021

“Part of the work for this year is to compare how dual UHD HDR and HD SDR workflows we’ve been used to compare with the single UHD workflows we will move to,” explains Muir. “We have a chance to check side-by-side for instance whether the green of the grass on Centre court looks like it should do once it’s been through the conversions.”

From 2023, the robotic courts will remain 1080p SDR; while the show courts will be produced in HD HDR and Centre court matches will be joined by No.1 in UHD HDR.

There’s reasonable demand for the higher format. The BBC for example outputs Centre court in UHD HDR and there are a lot of enquiries in Asia also. 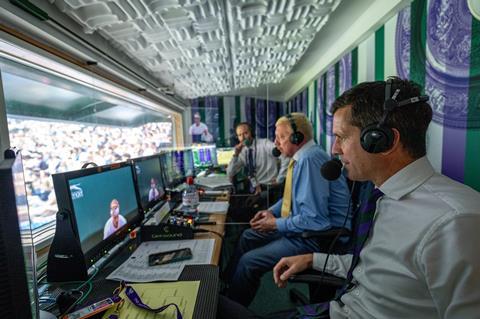 Boris Becker, Tim Henman and a producer inside one of the Broadcast commentary booths at The Championships 2021. Held at The All England Lawn Tennis Club, Wimbledon. Day 11 Friday 09/07/2021

“It will mean we can offer Centre and No.1 in UHD, so there’s more chance of always having UHD tennis to go to and less chance of having a half hour gap in the schedule when there is none.”

Behind the scenes in 360 degrees

With Vodafone, the event’s new official ‘Connectivity Partner’, a version of the Wimbledon Channel will be offered in a 360-degree format. The Wimbledon Channel is the AELTC’s own platform and provides a behind the scenes look at the Championship with occasional live match action. Renamed ‘Wimbledon Uncovered’, this channel will be presented as usual as a 2D stream and also in 360 using feeds from nine VR cameras at positions including on Centre court and courts 1-3 for live action.

“What we’re looking to do this year [at Wimbledon 2022] is to converge the data with the broadcast output more than ever to tell richer stories.”

“If we’re showing content where we don’t have a 360 version, such as a press conference, we will insert the 2D feed into the Jumbotron on Henman Hill [only viewable on the app] and wrap that image in a 360-degree camera feed on the Hill, so the viewer remains in the VR environment,” explains Davies. 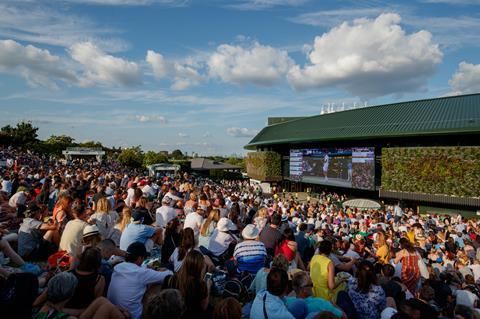 In recent years the recording and analysis of match data has grown into a huge enterprise. The management of it at Wimbledon falls to IBM and starts with the umpire whose inputs are the official match score. This is supplemented by courtside loggers – a combination of IBM data specialists and tennis experts - who input qualitative descriptors. Other data is pulled from the Hawk-Eye optical tracking system. SportsMedia Technology, (SMT), a provider of live data integration and real time graphics presentation, help JTC deliver the integration of IBM data to the broadcast feed.

“What we’re looking to do this year is to converge the data with the broadcast output more than ever to tell richer stories,” Davies says. “We’ll share information with media partners and our social media teams. Commentators can ask our data teams questions that we can illustrate with data. IBM is also looking at how we can scrape even more data from all the various input points to tell stories about how tennis is changing.”

Carlos Alcaraz is a case in point. The Spanish tennis sensation is using dropshots more frequently and more aggressively on hard/clay courts than perhaps any player previously, and data driven analysis of his matches can spotlight this. 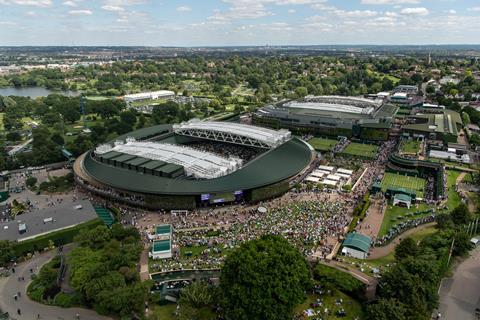 View from a crane of No.1 Court with The Hill in the foreground. The Championships 2019. Held at The All England Lawn Tennis Club, Wimbledon. Day 1 Monday 01/07/2019

“We’ve looked at AI options but right now it’s not able to capture everything we need,” says Georgie Green, Broadcast & Production Manager. “We need human eyes to make sure everything is logged as we want it.”

Historically the BBC been integral to the host broadcast production and it remains a hugely important partner to the AELTC. “We’re trying to better streamline the logging codes that we use to be compatible with the BBC library ,as well as ensure that search is easy on IMG Replay,” says Green.

In addition, the entire Wimbledon archive is now digitized and available for users to clip into programming from IMG Replay, a cloud-based solution.

For more on how technology is helping to change the way broadcasters cover sporting events, watch the webinar discussion: The enhanced TV sports experience – driving viewer engagement beyond sport