In one of her first interviews in her position as Group CTO of EMG, Lucy O’Brien reveals how she aims to push for change in broadcast engineering and streamline the offerings of the live production toolbox at her disposal.

Along with other big changes at EMG, April saw the broadcast services provider welcome industry leader Lucy O’Brien as Group CTO. With a mission to lead EMG’s technical strategy, develop its technological roadmap, manage its country CTOs across Europe and the US, and be responsible for recruiting the technical team at the group, O’Brien is based at EMG’s UK HQ in High Wycombe. 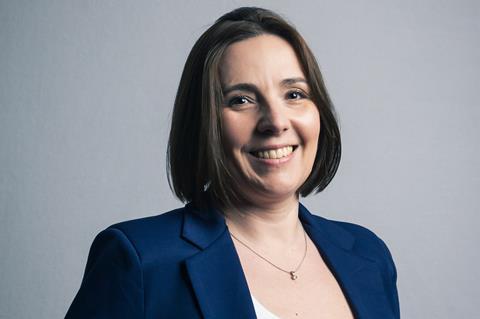 Her predecessor Bevan Gibson is now COO, and when speaking to IBC365 she confirmed that she aims to continue the momentum for change within the group started by Gibson.

“Nobody likes change,” she admits. “That’s always tricky. It doesn’t matter if you’re just changing someone’s email address or if you’re changing entirely how they work, but broadcasting has been changing hugely over the last five years.”

“It’s certainly going to change again over the next five years,” she continues. “We’re in a state of flux. Most of what we do has an element of networking behind it, but we’ve got lots of traditional broadcast engineers. I’m one of them to a degree; I’ve been in the industry 20 years now, and when I did my BBC graduate course, there was nothing about networking at all.”

“What we need is that hybrid person in the middle who can understand all the networking, but critically, also understand production workflow,” Lucy O’Brien

She has had plenty of opportunities to get acquainted with new tech trends, however. “When I was at the BBC, I was in playout for a long time, then I was in the operations centre for a while, I’ve done projects, I’ve done everything, pretty much. I’ve been quite fortunate in that sense,” she says.

Since then, O’Brien has done quite a lot of work in the traditional broadcast and IP fields; she was head of field operations at ITN and has also held engineering positions at Sky, Discovery and Arqiva, among others. However, the skills gap she identifies isn’t simply between old-school engineers and IT whizz-kids.

“There are lots of people who are broadcast through and through and there are network engineers, but what we need is that hybrid person in the middle who can understand all the networking, but critically, also understand production workflow,” she says. “So they can have the conversation with the producers, completely understand what they’re trying to get to, and then help that person. 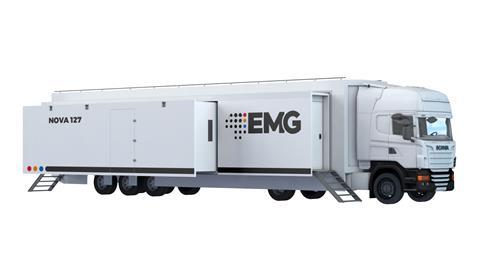 “Broadcast engineers, because of the nature of where we’ve come from, understand production workflow. Purely IT engineers, and I’ve worked with lots of them, can get to where you need to be, but when they first come in, they think they can do something like flip a switch and reboot. You can’t do that and go black on-air, even for ‘just 30 seconds’. Sometimes that’s what pure network engineers lack, the knowledge that the production workflow is so critical to everything that we do.”

O’Brien is a bit of a hybrid player herself. She joined EMG from GB News, where as head of technology & operations, she built the channel from scratch in an empty basement into a fully functional news room, two control rooms, two equipment rooms and a broadcast chain, as well as hiring staff, in under three months.

“Personally, I’ve just learned as I’ve gone along,” she says. “At GB News, I, fortunately, had two very IP-literate and very good people, and we could work stuff out between us.

“That project probably taught me the most, as it was almost completely NDI. There were 12 SDI cables in the entire business. Everything else was over NDI, so it was a very quick learning curve, to say the least.”

Another part of O’Brien’s remit is developing EMG’s decentralised and remote production capabilities.

“I know from talking to people on the production side that they kind of like remote production, but there is an element of people missing the buzz of being on-site,” she says. “My feeling is that over the next couple of years, we’ll end up in with 60% or 70% of work done as remote production. But there will still be that element that needs to be on-site, possibly the higher end production staff. For example, for the Rugby World Cup final, I can’t imagine that any of the production staff would want to be in a hangar in the middle of nowhere if they could be on-site. We need to be able to deliver both of those solutions to the best of our ability for our customers, and in an exceptional manner so that it’s a great experience wherever you end up going.” 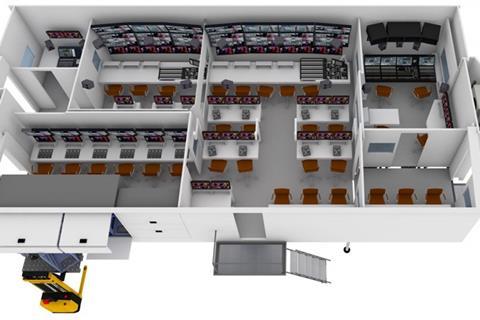 O’Brien is also tasked with enhancing EMG’s diPloy IP broadcast workflow for scalable live production. Developed from EMG’s Objective2020 project, this pushes data packets over IP networks, replacing baseband routers with network switches. The control software is designed around a northbound and a southbound system, where the former is based on familiar broadcast control software, interfacing with the southbound controller that runs hidden in the background.

“It was last used on the [Beijing] Olympics and it’s going next to Roland Garros,” she continues. “It will be used on the World Cup later in the year, and there are five or six other events planned. We will use it if it’s the right tool for the job. We’re not going to force diPloy on people if they don’t want to use that as a mechanism. If they want to use traditional OB then that’s what we’ll sell them.”

“I know from talking to people on the production side that they kind of like remote production, but there is an element of people missing the buzz of being on-site,” Lucy O’Brien

O’Brien reveals that there’s been some discussion over whether the system remains part of the EMG offering, or if diPloy could be commercially available as a product in its own right. “The entire team agree that it needs to get streamlined,” she says. “It’s already happening.

“The next part of this is to make sure that we streamline the complete production workflow from the OB, wherever that might be, to the end goal. We need the entire business to understand that the end goal may not just be linear television. Probably most of the time these days, it’s going to be OTT. So maybe we’re streaming directly into the Amazon cloud, maybe we’re streaming directly to something else.”

As well as overseeing an overall transition to IP technology and dealing with the resulting skills gap, as a female CTO, O’Brien will be expected to champion a move to rebalance the gender gap. Luckily, she’s up for the challenge.

“I think in terms of diversity, in terms of BAME, we’re leaps and bounds ahead of when I first started, back in the day. In terms of gender balance, it’s way off,” she says. “We have to address it at the school level. Ever since I went into management five or six years ago, every time I try to recruit anybody for any job, I just don’t get female candidates. It’s not for want of trying, but if you don’t get the people applying for the job, well you can’t force people to come into work for us.” 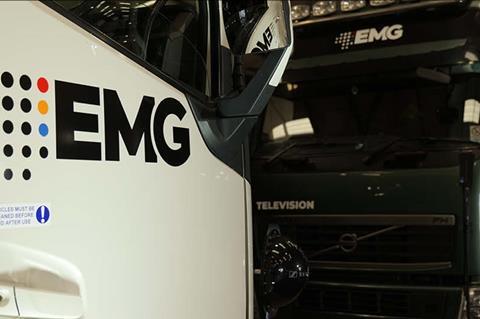 “I think some of it is because people don’t know that the technical side of broadcasting exists as a job,” she continues. “Everyone has this mindset that they want to be a producer, they want to be on screen, or they want to write scripts.

“Even when I was at university, my course was really small, with only 15 of us, but there were only three girls on the course. So, if you don’t address it at school level, just getting girls interested in more technical roles, not necessarily even broadcast, it’s a huge problem.”

O’Brien herself hopes to get involved with the RISE Mentoring scheme, and says more technical-focused outreach to schools “would help massively”.

However, there’s another aspect to all this that’s not so simple: dealing with the reaction of some in the industry towards greater balance.

“I think diversity in the workforce has to be done so carefully because there are lots of great people that you work with all the time, who feel that they didn’t get the job because they’re not the right gender, or they’re not the right kind of background,” she says. “[Of course] you have to employ people because they’re the right person for the job. If you have two great candidates and one of them is female and one of them is male, and you’re trying to improve your diversity, but they’re equal… then great, go for the girl.”

“I’ve always been on the backfoot, I guess because I’m always the only woman in the room,” she continues. “So [in the past] I felt I always had to work four times as hard as the next person because everyone assumes I’m only there because I’m a girl. My male counterparts didn’t even realise or notice that they were doing it, and sometimes feel hard done by. I get that, so I think we have to be really careful.”

O’Brien says there is a big diversity drive at EMG at the moment. “All of broadcasting needs to address it,” she says. “We need to address it with the understanding that there are some great people already in the industry that shouldn’t just be overlooked because they don’t fit the new current look.”

O’Brien says the response to her appointment from the industry has generally been positive, but a very small minority have exhibited the same old reactions she described before.

On a recent visit to EMG UK to witness the rebranding of the company, it was plain to see that any new CTO will have the pick of a very extensive and expanding broadcast production toolbox.

With her fresh perspective, O’Brien agrees but returns to her theme of streamlining. “From my point of view, it looks like there are lots of little different pockets of brilliance,” she says. “We need to make sure we’ve got a sales team across all of the regions that understand everything that we can offer, so when we are going to tender, we can say, ‘we can give you everything you ever could need’.

“That’s what people want. They want ease. They just want to turn up and say, ‘you just deal with it, here’s your two endpoints, crack on’.”

“That is quite exciting actually,” she adds. “It’s nice to be in a business that has had that forethought and seems to have it all under the one umbrella. We just need to make sure that we’re utilising all those tools as best as we can, to deliver excellence to our customers. And that’s where I hope I can add value, being an outsider, having the experience, looking [at it all] and saying this or that is going work really well.”

O’Brien says this is the most strategic role she’s had, but hopes that her extensive operational and people management experience will have a net benefit.

“When you get to a certain level, you forget sometimes what it was like on the ground, so you need to be mindful of that when you’re making huge strategic decisions,” she says. “There are individuals involved in this. We need to make sure that they are looked after, that they do the best job for our client, but they also do a good job because they enjoy it.”

Read more As IP transformation accelerates, are we facing a skills crisis?