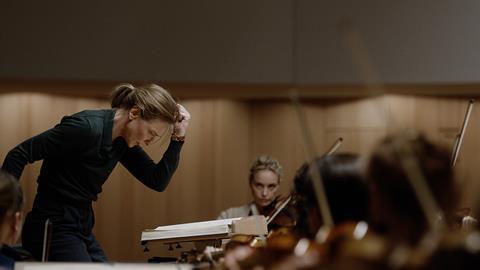 The Oscars 2023 nominees for Best Cinematography have been announced, Adrian Pennington takes a deeper dive into the details behind the headlines.

The Oscars 2023 nominees for Best Cinematography are:

All Quiet on the Western Front - James Friend

Mandy Walker ACS ASC is the only female to make the shortlist and one of a handful of women to ever be nominated but stands a great to chance to make history with Baz Luhrmann’s fizzy biopic-as-pop-opera.

“The discussion I had with Baz really early on was about the emotion of Elvis’ journey which is at once epic and intimate,” Walker told IBC365. Or as Luhrmann put it, “Elvis is kind of the original superhero. He rises so high, then finds his kryptonite and falls so low.”

The film arcs from Presley’s childhood in Mississippi to his conquering of Vegas over five decades planned by the production team with a costume, colour palette and texture specific for every sequence.

“For instance, once Elvis got to Hollywood, he had this motorhome outfitted in red velvet and gold and shiny black so we used that as cues for colour tests,” Walker said.

Scenes in Tupelo and Memphis are keyed into the evocative look of contemporary stills photographers Saul Leiter and Gordan Parks. For the 50s and 60s eras, Walker leant into simulations of Kodachrome stock and then changed to a glitzier and more saturated feel for Vegas.

A 1968 TV comeback special was extensively recreated in the film sometimes shot for shot. Walker said. “Baz called these our ‘Trainspotting Scenes’, meaning that we’d be very particular about matching the lighting and camera angles, even down to the dimmer board operators who would change the lights to the music just as in the original. We studied this footage meticulously to reproduce the shots.”

Read more Behind the Scenes: Elvis

German cinematographer Florian Hoffmeister has already won both the top prize at Camerimage, for his unflashy but intimate delve into the unravelling mind of music maestro Lydia Tár (Cate Blanchett). Todd Field’s unnerving art house exploration of #MeToo and broader power dynamics is a is surgically exposed in intense close-ups and deft single take ‘oners’.

“Todd’s script was very precise and really intimate, but also detached and because of that detachment I became aware of the nuances of her character and of the movie’s many layers of reality,” Hoffmeister said.

In certain scenes, Hoffmeister’s camera is fluid as it circles the protagonist. In others it is seemingly inert, all the better to watch Tar’s self-control self-destruct.

“It’s a form of camera placement where the camera just observes and the longer I can observe the more intimate it will feel. To me, that was one of the key experiments; that even though you start from a place of restraint, it is really liberating.”

This was fleshed out in the lighting scheme which for Hoffmeister should always feel authentic to the space and never noticeable. “In lighting I wanted to distinguish between her ‘appearing’ in contrast to her ‘being’. For the character those were two different things.

“So when Tár appears before an audience in public, we would shape her with more contrast, to make her more of a persona. Whereas in her apartment or in her study in moments of anxiety or of pure creativity we would keep lighting very soft, almost in an open shadow. Then those worlds collide at the end when the lighting isn’t giving her that uplift anymore and she is very frail.”

Read more Behind the Scenes: Tár

Filmed twice before in 1930 and 1979, the mud, gore and terrifying insanity of trench warfare is recreated with a relevance to the current war in Ukraine. 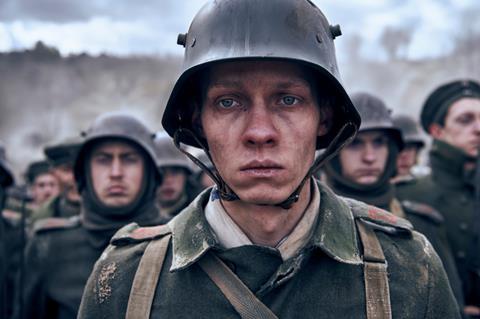 “People have said it’s a beautiful looking film but it should be beautiful in its horror,” British DP James Friend, ASC BSC told IBC365. “This should not be comfortable to watch. It should not be aesthetically sumptuous.”

The extensive battlefield scenes were shot at a Soviet era airport in Milovice, Czech Republic. The trenches were built to allow for construction of extended camera shots following the actors over long distances.

While the main camera was the IMAX certified Alexa 65, given the terrain, many shot could only have been achieved with a smaller, more lightweight Alexa Mini LF on a Stabileye gimbal operated by Danny Bishop.

One stand out shot tracks the lead character Paul running away from camera before being sent flying by explosive grenade into a deep crater and rolling into water. For this, Bishop was harnessed into a wire descender rig normally used to suspend actors allowing him to perform the jump with the stunt man.

“The technique has been used a few times such as following stunt performers out of windows but this is the first time I’ve seen it used in a high-octane war environment,” Friend said.

With this and Bardo, Netflix has landed two best cinematography nominations.

Read more: Behind the Scenes: All Quiet on the Western Front

Like Birdman and The Revenant, both directed by Mexican Alejandro González Iñárritu and both winners of cinematography Oscars (for Emmanuel Lubezki) there is a beautiful liquidity to the camera movement in Bardo. The camera seems to float within and between scenes. French Iranian Darius Khondji ASC AFC brings his outsiders eye to an intensely personal odyssey through Mexican history as filtered through Iñárritu’s own memories.

“Paintings and films like 8 ½ and Wild Strawberries are never direct literal references,” he said. “You can only take in a sense of them, some drops like a drug, because otherwise it would be too strong.”

In a prolonged single take night club sequence, set in the iconic dance hall Salon Los Angeles, the camera moves with the rhythms of latin music on the dancefloor, before the soundtrack breaks into a startling cappella vocal of David Bowie’s ‘Let’s Dance’ to which only Silverio mimes.

He said, “We change the colour of the light constantly as the camera follows the actors to make the audience feel together with the main character and designed it with choreography like a 1930s Busby Berkeley musical. It was a big operatic moment

Oscar-nominated for Evita back in 1996, the 66-year-old was awarded the Pierre Angénieux Tribute in recognition of an exceptional career at Cannes last year.

Read more Behind the Scenes: Bardo

Roger Deakins ASC, BSC, has earned a cult status as the creator of some of the most gorgeous films made in the last two decades. He has won twice, for Blade Runner 2049 and 1917, was knighted in 2021 and with this his sixteenth nomination, the 73-year old shows no sign of stopping. 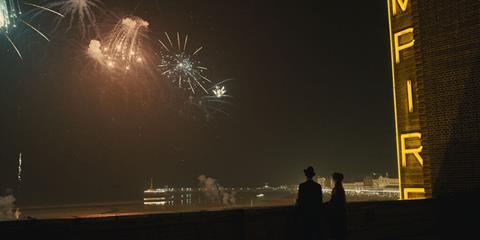 Empire of Light reunites Deakins with director Sam Mendes for a fifth occasion (after teaming up on Jarhead, Skyfall, Revolutionary Road and 1917), and could so easily be the title of his autobiography. His work leavens a rather heavy-handed script about a love affair between employees at a cinema in the south coast of England in the 1980s.

Deakins, who grew up in South Devon and last year published a book of stills photography with many images from the region, felt at home with the unglamorous seaside setting.

“Even though I moved away by the early ‘80s, I still return to Torquay,” he told British Cinematographer. “Many things in Sam’s script were familiar – there were also bikers in Torquay and nearby Paignton.”

Mendes and Deakins spent a number of days talking through the visual approach. “It could have been all handheld, like a docudrama, which we did discuss,” said Deakins. “And I don’t know if it was a reaction to 1917, a film where the camera doesn’t stop moving, but it struck both of us that what felt right for this film was more stylised, more quiet – much more static to allow people the space in a frame.

“As it’s a character study, the approach is often not finalised until the actors are on set,” he added. “You never want photography that’s too flashy. It’s all about creating a natural world. In cinematography, if something stands out, you’ve failed. You’re trying to create a seamless entity.”