Preserving assets: Taking the long view on ML and AI

The challenges of asset archiving have broadened in recent years, according to an expert panel. Speaking on the IBC webinar, ‘Preserving assets’, Bríd Dooley, Head of Archives at RTÉ explained that while the traditional requirements of an archive were very much still in play, increasingly new demands are being surfaced:

“We need to grow our knowledge and skills, we need to be able to explain to our colleagues how we need to be supported, what preservation means and how digital works. We need them to help us guarantee, and be able to demonstrate, that the files we put into storage today will be there for 100 years plus one day from now - that’s a big ask. Overall, that’s not something a broadcaster has necessarily looked at previously.” 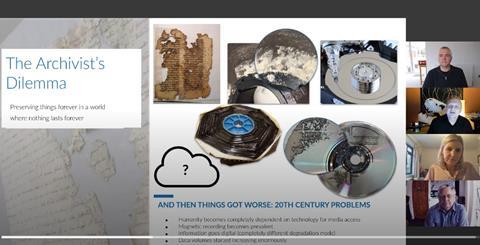 Dooley continued to highlight that new technologies may offer plenty of promise, but that the magic bullet is still far from reality: “Using AI is something we’re looking into right now, I suppose. We haven’t had the luxury of looking into it up to now because we haven’t had the datasets. But we are very mindful of how it’s been working for quite a number of years in archives [that] are further ahead than us. So for example, the Swiss archives, they’ve been using AI around basic speech-to-text for years as an aid to their documentation. I think we have moved on and I think perhaps by being late to the party, [RTÉ] can even take a few leads [in the future].

“But there’s a lot of challenges with AI. There’s certainly some very good machine learning tools like speech-to-text, which I think will be incredibly valuable - particularly in audio - when we get to deploy it. We will be testing opportunities to do that as part of our development and deployment. Because you know, you simply cannot you can’t go back and document that kind of material [manually] in the way you used to do.”

AI - not just for the sake of it

As Dooley went on to point out, the operational challenges of AI in particular are not just restricted to integrating the basic technology.

“I think there’s a huge value there for video. I think that image detection is getting there. But, there’s a cost to that. You have to deploy the best tools to achieve something, not for the sake of them. You’ve got to test sets of data. We’re working on a couple of projects at the moment, but we’re going to test some of these with the partners on small sets of data and on larger sets of data as we generate them and see what comes of that.

“There is a place for taking some of what I would call ‘the pain’ out of that manual effort in creating good catalogues and creating good metadata, but doing so in a way that’s meaningful for what the business needs rather than for the sake of the tools themselves,” she noted.

Preserving archive content has become an increasingly hot topic thanks - in part - to the pandemic, but also due to increased recognition of the value of archive assets, both in financial and sociological terms. Denis Leconte, Vice President of Technology at Iron Mountain Entertainment Services was keen to highlight just how fast the industry is moving from a volume and storage perspective:

“Data is [being] generated at an exponential rate. And you end up with more data than you can look through, like a production will increase in size in terms of its total corporate data to the point where it’s difficult to find anything.

“And what’s interesting is that when you have one camera, you [start to] use multiple cameras, which is better because you just shoot to get the right shot. You can shoot more footage because there’s not really anything consumable anymore, you just fill the cards or whatever is available on set. This means that you end up with a lot of assets that are sort of similar and you don’t want to find all of them, you only want to find some of them. And this is where classification is actually becoming really important as the quantity of assets increases.”

Leconte continued to point out that metadata is not only vital in the short term, but also has a more nuanced role to play in the mid-to-long term too.

“Machine learning is really important for classification, and to be able to automatically enrich each asset with metadata. Something else which also influences discoverability is the evolution of search. From back in the 90s and ‘advanced search’ to the 2000s when Google came up with just one field, to now, where search has evolved into more of a conversational space with Alexa and Siri and Google, and you’re having this sort of discussion with your search space. The interesting aspect of this is that the meta data that is underlying the search needs to be parsed and there is a very real risk of losing assets because the meta data becomes stale.

“So in terms of data enrichment, it’s also important to consider how to keep assets current as search evolves, [and consider] how search will evolve over time - because it’s not done evolving,” he summarised.

A final conversation around the difficulties of codec choice threw real relief on the technical challenges faced by archival experts working in an increasingly digital industry. The question of which to choose is still a matter of some debate, as the panel made very clear:

Dooley commented: “It’s a debate that’s been had and runs between what we shoot in production and what we end up with in the archive. What is required in the archive is the best quality we can get, so I guess our ambition is to maintain that. For me, if I look back at challenges like film where you can always get something more out of it later, it really depends on what decisions the broadcaster makes for us in terms of what it will shoot and transmit on but there may be a higher quality [codec option] there that we can take, which we would always go for.”

Quinton Schmidt, Broadcast Operations and Technology Consultant closed with a pragmatic take on new codecs: “I tell everyone - it might be a nice format, but does [a new codec actually present] progress? Is it Interoperable Master Format (IMF) compatible, and then what happens to the ease of delivery now the files are bigger? How do we easily move that from production into the broadcast? It sometimes just brings different headaches. Then there are technologies or techniques available to simplify these things, but what are the proprietary tools [you need to spin up] and what codecs do those support? I’m keeping my eyes open on this one!”

For the full debate and talking points, catch up with the IBC webinar, ‘Preserving assets’ on catch-up now…