Just prior to IBC2019, MovieLabs released The Evolution of Content Creation, a white paper that created broad industry impact, recognition and alignment around the foundational principles of how the industry would migrate production workflows to the cloud. Senior technology executives from the major studios took to the IBC Conference stage to reflect on the progress being made as they help their teams, vendors and partners move from “Principles to Practice” as they implement this ‘2030 Vision’.

According to MovieLabs CEO Richard Berger, who moderated the session, “the goal when we released the Vision was to reduce friction, take inefficiencies out of our workflows, and ultimately, give more time back to creatives”. 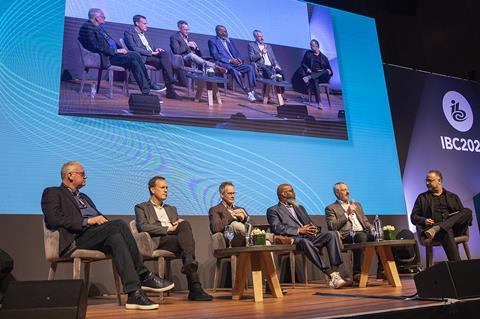 With regards to how the 2030 Vision has impacted strategies, Executive Vice President, Global Production & Studio Technology at Paramount, Anthony Guarino, said that it has been a major influencing factor on how the company is approaching production technology globally.

Renard Jenkins, Senior Vice President, Production Integration and Creative Technology Services at Warner Bros. Discovery, added: “We’re looking at the work that we’re doing in ontology and taxonomy, and making sure that teams across our studios are speaking the same language.

“Warner Bros. Discovery has a huge library, and the question is how do we make the monetisation of that library a little easier, and actually create workflows that allow us to do that without causing strain and stress on the rest of the process?”

Berger also mentioned MovieLabs’ 2030 Showcase, whereby it will release a series of case studies over the coming months that demonstrate how these principles are being put into practice.