The challenge: Ethics of VR and AR in media

As immersive tech continues to create a buzz in the industry, the ‘Godmother of Virtual Reality’ Nonny de la Peña spoke at IBC2022 to emphasise why VR/ AR is going to play an increasingly crucial role in the future of media and entertainment.

Speaking on Day Two’s headline keynote, De la Peña, who is widely recognised as one of the industry’s most celebrated trailblazers and one of the most influential pioneers in virtual and augmented reality and immersive technologies and journalism, spoke to a packed IBC 2022 Keynote hall.

De la Peña spoke of her hopes for the future of VR/ AR in terms of increasing diversity in algorithm creation, the future of filmmaking and how AR and the metaverse can bring people together in more meaningful and impactful ways and transform digital spaces. She also sounded a note of caution as to the key challenges that face the media and entertainment community as we move into an AR focussed future.Her presentation raised concerns on the design of algorithms – and why the way in which we design them now will affect the diversity of them in years to come.

“Even though this AI is to grow, it’s up to us right now to be thinking about what the inputs are for this? You know, algorithms of the future.”

She spoke at length about how film and television can learn from the gaming industry, using an example of Unity’s recent purchase of “a lot of digital and images - they are really going to have a huge presence in the future of entertainment.”

She advised that film and production businesses “should probably think about who in your team really understands game engines and how to start modelling things out,” to lower operational costs on trading sets and locations. She emphasised the importance of narrative driven content, and noted that “everyone should be paying attention to VR production”. 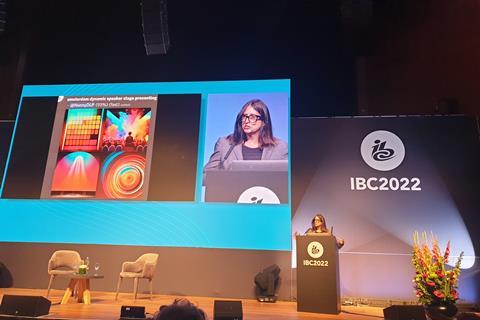 De la Peña was bullish about blockchain, but from the perspective of identity protection: “As a journalist, how do we know that a story is accurate, that it’s not a fake character, and yet protect individuals who might be revealing information that’s very dangerous. If you’ve got communities around blockchain that provide a way to protect identity, but they still have a way to track provenance of information. So I think blockchain is extraordinarily powerful.”

“I’m a real fan of Interoperability - your material should be able to go whatever Metaverse you want to occupy, whether it’s your spatial business meeting, or whether it’s your playful VR chat space, you should be able to move through them [seamlessly]. I mean, that’s what we did with the web, right? That’s why the web works, by the way, because it has some [agreed] standards. We’re seeing it [in VR] now and there’s no reason we shouldn’t be thinking about [the ethics] right now”, she concluded.