Hear what production technology specialists have to say about the biggest themes at IBC2022 and the changes they’ve seen to areas such as production and post, live remote, virtual production and 5G.

The Production and Post webinar was the second of two discussions released ahead of IBC2022 - you can watch the first one on Supply Chain and Streaming here. 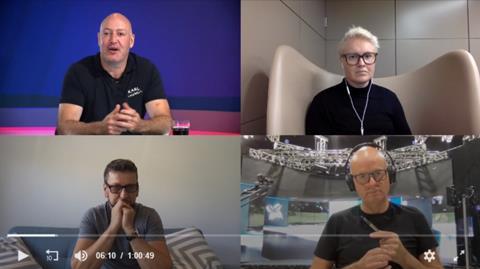 The one-hour discussion features the thoughts of Robin Cramp, Head of Business Development, Production Park for XPLOR; Wesley Dodd, CEO, Celebro Studios; and Tomasz Witkowski, Co-founder, Soho Media Club. It covered a wide array of topics, from live and remote production to the metaverse and the growing impact of 5G.

You can catch up with the webinar on-demand right here. Or see below for a round-up of the key highlights and insights, including: what has “turbocharged the industry,” the “M word,” and what the expert panel really wanted to see at the show.

COVID has shaped the story of our industry

If there was one thing the panel agreed on in this webinar, it was that going back to IBC in person was immensely valuable. “The industry has moved on so much,” says Production Park’s Robin Cramp, adding that technology and content solutions wouldn’t perhaps be where they are now “if we hadn’t had the pandemic. I’m really keen to see how the industry is addressing that [at IBC]… and being able to have those discussions in the round and meeting up with old friends and new people as well.”

Celebro Studios CEO Wesley Dodd agrees: “That is the story of our industry. We’re seeing a huge reconciliation of the things that we had to do during COVID. We had all these incredible technical challenges. We had all these production challenges that we had to meet… and we did it on our own in isolation. Now, we’re all going to come together [at IBC2022] and we’re going to compare notes. And we’re going to see the mistakes that people made. We’re going to find out the incredible solutions that some people have found.

“Also then looking at how the industry catches up. Because we, as service providers, know what we need to do in our industry. But the technology companies are going to have to start answering our needs. So, I’ve been looking really hard at IBC to see which of those companies have actually watched and listened to what we’ve needed to do.”

What are the biggest trends for 2022 (and beyond)?

As far as the biggest M&E trends of 2022 are concerned, we’ve already seen a lot of interest in areas such as virtual production, 5G, sustainability and AI. For Tomasz Witkowski, you can add the Metaverse to the list, even though it can mean different things to different people.

“Post production has stayed at the same level of what [it was]. Film production has changed [to] some degree, but needs to act much quicker to progress. The metaverse has opened new opportunities for democratised AI technology, but also [for] finding new revenue streams. And that’s why it’s important for us, because as we know inflation is so big that we need to find a way to earn more money. As a production, as content owners and as asset consumers, we all need to produce much better things.”

Now that’s going to be very interesting for our industry because essentially it’s got much, much bigger… Being a studio, before [COVID] my clients were limited to broadcasters or TV producers or filmmakers. My client base has just got so much larger now. They could be coming from the airline sector or the catering sector… They all are trying to do the same thing though. They’re trying to communicate. And I think that is one of the incredibly good things that’s come out of COVID - we’ve had such a focus on how we can communicate better with each other and I think we’re seeing that change in our industry.

“I think it can be very interesting to see how our industry puts its arms around other industries and pulls them into the kind of things and the technologies and the trends that we know and love.”

Robin Cramp believes that the pandemic has “turbocharged the industry.” As he explains on the webinar: “I think that the way that the industry has moved forward over the last three years is that a lot of things have been forced… If we talk about real time virtual production, I think there are a lot of developments in that particular space. But [they have] been driven by the fact that we’ve needed to do new things. in new ways very quickly.

“And I think a lot of the development that has been happening on the R&D side of things has come into the ‘business as usual’ way of working… So, you’re actually developing the scope of what [virtual production] can be, but at the same time you’re doing it on stage. You’re doing a piece of work trying to develop opportunities around this particular space, but also trying to innovate in where this area is going.”

Moving out of your comfort zone

While two years of COVID was tough to endure for many, Wesley Dodd suggests that it could have pushed the M&E industry forward by 20 years. “Traditionally big broadcasters tend to move pretty slowly. They’re big, lumbering things. So, [implementing] new technology, new ways of working, is really difficult in a big organisation. And I think for us, one of the big advantages was, as a small organisation, we could deploy those technologies really quickly for them, and deliver them in a way that they just wouldn’t be able to do.”

Dodd cites a specific example: “Right in the middle of the pandemic we had the big US election, Donald Trump handing over to Biden and then all the events around that. And because of COVID It was an extraordinary time because again, broadcasters were having to find a new way of working. We’ve got multiple studios on our roof in Washington, DC. So, we made them all robotic. Now, that was because again, COVID meant we had fewer people available and we wanted to have fewer people in the studios.

That’s something I think that would have been a really hard sell to some of the tier one broadcasters - the BBCs, the CNNs, or Foxes. They would have been like: ‘No. That’s not how we do things. We want this camera. We want it to look like this.’ The fact that they were prepared to make those compromises because COVID forced it, has now led to a technical change and a different way of working… It’s taken people out of their comfort zone. And out of their comfort zone, they’ve thrived.”

The second half of the webinar recording goes on to discuss topics that include: motion capture, NDI, 5G, the IBC2022 Accelerator programme and ongoing sustainability initiatives. But at the heart of IBC2022 is innovation and going back to the show is a chance to see everything in one place, from the big players like AWS and Adobe to the smaller companies who are challenging and disrupting the status quo.

“To some extent, for all of us, we are still finding our feet [after the pandemic],” says Wesley Dodd, “and trying to understand what our industry is going to look like on the other side. And that’s why events like IBC are going to be important. We are going to see all the big companies that we know, coming out with big ideas and big pieces of technology. That’s going to be exciting because it’s going to give us further food for thought about where we’re going as an industry. I think the COVID disrupted so much and we have to use that disruption.”

“I certainly don’t have the answers to what’s next. But I do know there is something very exciting out there and I think that’s going to be a great opportunity.”