Players, teams and officials at the World Cup 2022 will benefit from AI driven analysis for offside checks, performance stats and a sensor in the match ball, reports Adrian Pennington

The FIFA World Cup Division is responsible for the broadcast production of the tournament and only has one goal - to capture the largest possible global audience. FIFA calculated that over 3.5 billion people watched part of the World Cup 2018 in Russia and will be hoping to top that this time around. 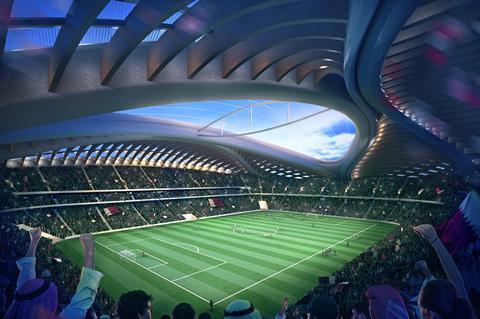 While it oversees decisions, FIFA has once again appointed Host Broadcasting Services (HBS) a Swiss based outfit which has its planning headquarters in France and has held the contract since Korea/Japan in 2002. It has a team of around 2500 producing the event.

While UHD / HDR was used for multilateral production in Russia it required a dual layer production, but now, all-new for 2022, the UHD / HDR standard will be applied to all 64 matches as a single unified layer from capture to transmission. This advance will streamline the ability to colour manage transformations between HDR and SDR.

FIFA have picked Hybrid Log Gamma (HLG/ BT.2100) as its HDR flavour for the World Cup 2022 in Qatar saying that is has matured as a standard and is now widely used in the industry.

The standard 4K frame rate is 50fps with HD HDR capture at 150fps for the higher frame rate cameras, all using HLG.

A workflow for standard dynamic range (SDR) will hang off this using closed loop monitoring in which the HDR source is down-mapped to SDR at the end of the signal chain.

Broadcasters can use a web-based multi-viewer control panel to switch between available feeds on the router, regardless of whether they have an on-site IBC presence or not.

The cloud-based media server FIFA MAX (Media Asset Exchange) is designed to hold 6000 hours of content, all of which is accessible to broadcasters. The primary native media format of the media server is XAVC-I 1080/50p. This system supports ingest and delivery in HDR, while the preview for browsing proxies is SDR.

The basic sound track mix for rights holders contains all the elements of the broadcast such as closeball FX, ambience and all vision-related content.

Additional audio programming is made available to cater for the audio video receivers that some people will have at home in their home cinema setup. The three dimensional capture of the stadium ambience is built around a primary eight-capsule mic array and supported by additional 3D arrays closer to the spectators.

Each match will be covered by 42 cameras and include super slo-mo and ultra slow motion units. RF cameras handheld will offer fan coverage, team arrivals and player interviews. HBS has hired six directors to cover all matches between them.

The main feed (called Extended Stadium Feed) contains pre-match, in-match and post-match features and follow a set running order so that broadcasters know precisely where they can insert their own elements. Production of each match ends with a 52-minute review show. All the content is made available to rights holders as either ready-to-use edits or as raw content for them to tailor their own coverage.

The backbone of FIFA’s non-live coverage offered to broadcasters is from ENG crews comprising a producer, camera op and a driver/interpreter. There are 32 of these, each assigned to a team who will follow the players on matchdays, training sessions and press conferences.

An additional eight TV story crews will travel around the country filming various colour features such as fan portraits.

To help broadcasters create or augment their own digital – social media – offerings FIFA has an API, an SDK and a white label product. The content cornerstone of this is the ‘matchcast’ which offers digital teams access and stream to fans multiple live OTT feeds.

A white label AR app has also been developed. This offers AR content to fans through their smartphones and will “transform living rooms into a 3D data centre,” according to FIFA. Tracking data means fans can focus on a specific player or team to get insight into the on-field performance.

Fans will be delighted to learn that FIFA will introduce a system intended to keep everyone abreast of VAR decisions. Updates from the VAR’/s video operation room located at the central IBC will be displayed on the commentator information system and the live match feed. The host coverage will also include a picture-in-picture composite during on-field reviews.

World football’s governing body is harnessing technology to improve the game through R&D with the aim of enhancing the football experience on and off the pitch. Three of the latest innovations will debut at the World Cup 2022 in Qatar.

Introduced to help officiating at this World Cup, a semi-automated offside technology is ready and waiting. This uses 12 dedicated tracking cameras mounted underneath the roof of the stadium to track the ball and up to 29 data points of each individual player, 50 times per second, calculating their exact position on the pitch. The 29 collected data points include all limbs and extremities that are relevant for making offside calls.

The official match ball will contain an inertial measurement unit (IMU) sensor to provide a further data point for the detection of tight offside incidents. This sensor, positioned in the centre of the ball, sends ball data to the video operation room 500 times per second, allowing a very precise detection of the kick point.

FIFA explain that by combining the limb- and ball-tracking data and applying AI, the new technology provides an automated offside alert to the VAR officials. The exact positional data points that were used to make the decision are then generated into a 3D animation that “perfectly details the position of the players’ limbs at the moment the ball was played”. This 3D animation, “which will always show the best possible perspectives for an offside situation”, will then be shown on giant screens in the stadium and made available to broadcasters.

Players will be able to get insights into their on-field performance through a new FIFA Player App. Developed with professional footballer’s organisation FIFPRO and trialled at the FIFA Arab Cup 2021, the App is being used for the first time in Qatar.

Players apparently have expressed an interest in assessing their individual player-performance data shortly after each match. The data is captured by a FIFA team of football performance analysts and combined with tracking data. Examples include whether a player made an offer or movement to receive, whether their distribution action broke opposition lines, and the pressure they applied to an opponent in possession of the ball.

Physical performance metrics are collected via an in-stadium tracking system consisting of multiple cameras located around the pitch. Metrics include distance covered at various speed thresholds, number of actions above 25km/h, and maximum speed, all displayed on positional heat maps. There are also ‘football intelligence metrics’ that include analysis of the phase of play, line-breaking events, receiving locations, and pressure being applied to the player in possession of the ball.

This data is then synchronised with match footage to enable players to watch all key moments of their own performance, using different camera angles. Additionally, players can view and share on social media multiple action photographs of themselves taken during key moments of each World Cup match.

Johannes Holzmüller, FIFA Director of Football Technology & Innovation, said: “For the first time at a FIFA World Cup, not only the participating teams but also all players will have the opportunity to get direct access to their own performance data and the related video clips after each match. This player-centric development is based on direct feedback from the players and is another great example of how FIFA is using technology to the best of its potential by improving the football experience for the key actors on the pitch.”

FIFA is further making available a Football Data Ecosystem to teams, coaches, players and the media which it describes as “a complex network of several data sources, data processors and distribution layers”. The aim is to secure the highest possible data quality for analysis within just a few seconds from when the action occurs on the field.

During each match data is gathered from on the field actions such as passes, shots, substitutions and official decisions. Analysts, known as “speakers”, are in the stadium and focus all their attention on what is happening on the field of play and communicate that information to the person known as the “writer”, who enters the information in the system. The speaker transcribes the actions on the pitch “using easy and fluid language”, so that the writer can easily input the information into the system and the data can be delivered live to the data recipients. In addition to the speaker and the writer, up to two live observers are used to check the live data and to collect a second layer of data with additional information.

While the most important and relevant information is captured directly by the speaker, the two live observers add value to these events at the highest level of data-gathering.

To collect the positional data (x-y coordinates) of all players, the referees and the ball, an optical tracking system has been installed in all Qatar’s World Cup stadia. This is able to capture player positioning multiple times per second, “accurate to the nearest centimetre” and is also used to calculate speed, distance and direction of play.

In a statement Simon Colosimo, FIFPRO Deputy General Secretary, said: “Players have clearly articulated to us that they want more access and benefit from the collection of their data. In combination with the Charter of Player Data Rights announced earlier this week, the FIFA Player App is a positive outcome that will activate personal data rights and provide a new resource for players at the FIFA World Cup in Qatar. We expect the joint work between FIFA and FIFPRO on player data to continue unlocking benefits for men and women players across a wide range of areas, including health and performance, in-game technology and matchday experience.”