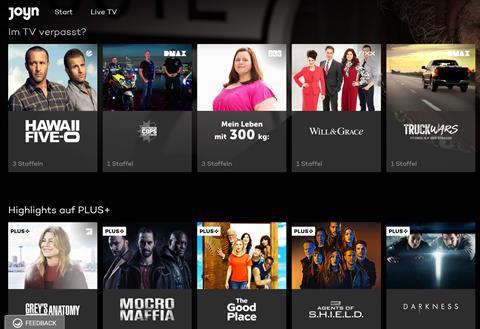 ProSiebenSat.1 and Discovery’s cross-channel entertainment streaming platform Joyn has expanded its German streaming service with the launch of Joyn Plus+.

The premium video service will be available to viewers for a subscription of €6.99 per month and expanding on Joyn’s content offering with more exclusives and original series.

According to a statement from ProSieben, Joyn Plus+ will offer more than 60 live TV channels in high-definition (HD), six additional pay-TV channels, as well as an extensive range of films and series from Maxdome as well as Joyn Originals combined in one app, largely without advertising.

Joyn was announced in May this year with the duo claiming it will be the most “extensive on-demand offering” of original series, shows, previews and local content.

Joyn Plus+ service will introduce The Eurosport Player by the middle of next year as well as building on its ”comprehensive entertainment offering for a seamless entertainment experience within one app.”

Joyn chief executive and managing director Alexandar Vassilev said: “Since our launch in June, we have taken our users on a journey.

“The launch of Joyn PLUS+ sets another important milestone on our way to becoming the home of local entertainment.

“Our ‘freemium’ model combines the best TV content with premium VoD content, which is an absolutely unique selling point in the German market. I am proud of what our team has achieved in just a few months and looking forward to everything else to come.”

At the beginning of December, the format will be joined by another in-house production for young viewers, The Entertainers by YouTuber Rewinside, who has more than four million followers on its social media channels.

In addition, the channels 3sat, ServusTV, Bloomberg and CNBC will be integrated into the free service.

ProSieben announced that if customers purchase a Joyn PLUS+ subscription before 31 December 2019, customers will receive a free sample month and then pay the discounted introductory price of €3.99 for three months.