The Dejero technology allowed the SDPD to eliminate the vulnerability of network congestion that is synonymous with this type of high-profile sports event. By combining all available cellular networks into a single service during the event, Dejero was able to provide uninterrupted internet connectivity that enabled officers to monitor every aspect of the Torrey Pines South Course in real-time and ensure the safety of players, spectators and organisers. 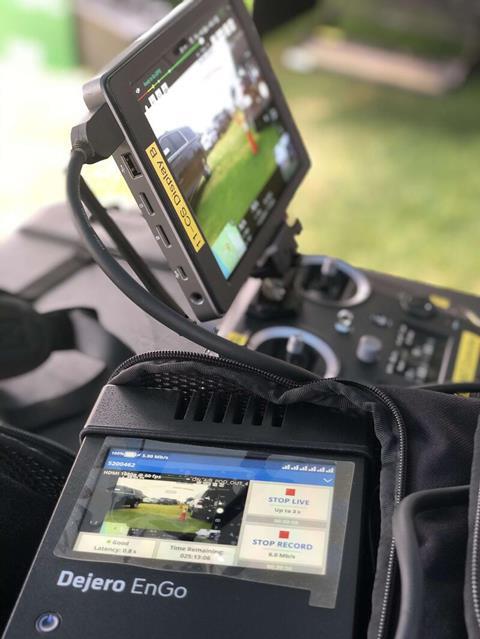 Supplied by local network engineering company AggreGateway as part of a wider network provision contract for the event, the Dejero solutions included an EnGo 260 mobile transmitter connected to a drone base station. The EnGo fed real-time video back to the SDPD command post and HQ over cellular. Prior to using Dejero, a drone pilot’s movements would be restricted as connection was dependent on the base station’s line-of-sight to a receiving antenna. With the EnGo mobile transmitter, which leverages multiple networks simultaneously to send high-definition tactical video in real-time, the drone pilot could move beyond visual line-of-sight with uninterrupted connectivity.

“The SDPD drone division wanted to be able to fly anywhere along the entire golf course and transmit real-time video back into the command post as well as to San Diego Police HQ without having to worry about antenna line-of-sight,” said Octavio Navarro, network engineer and founder of AggreGateway.” Dejero provided true mobility by allowing the drone pilot to roam throughout the course during the event while continuously transmitting video with low latency, which is crucial for real-time situational awareness. The performance was flawless, despite the congestion of the cellular networks that was caused by thousands of people in the crowd using smartphones for communications and to upload content to social media.”

“What’s more, the Dejero solution came pre-configured so police officers only needed to press a single button to get up and running,” added Navarro. “No technical training was required and they didn’t need to worry about finding signals or troubleshooting – they could just focus on the job at hand.”

Unlike traditional failover or link aggregation solutions, the Dejero GateWay uses Smart Blending Technology to simultaneously combine wireless (3G/4G/5G and satellite) IP connections from multiple providers to form a virtual ‘network of networks’ as a single service. If a connection is lost or becomes congested in a highly populated area, the Dejero technology automatically re-routes packets in real-time across the other connection paths to maintain a reliable connection.