Kent State University launched its esports programme in 1998 and it currently competes at a varsity level in the Overwatch, League of Legends, Rocket League and Hearthstone competitions. 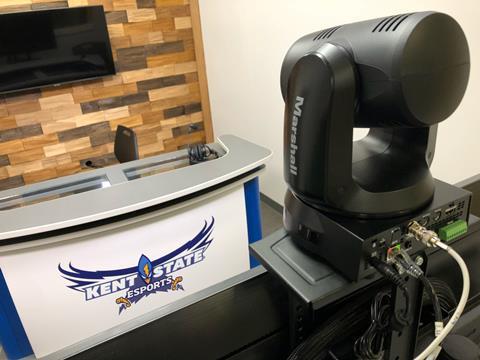 The university was already familiar with Marshall, as its cameras are used throughout the campus for some of its traditional sports and as observation cameras for classrooms and labs. The design and integration of Kent State’s 12-seat V-style arena gaming space was done entirely in-house with the help of Heartland Video, which provided most of the video production gear. The use of Marshall’s ultra-compact cameras allowed the team to enhance its live streams to Twitch without causing any player distractions or interference.

“To capture athlete reactions, we placed one CV503 POV camera at each of the 12 player stations as gamer cams,” said Forbes. “We also installed two CV730 PTZ cameras in the arena space to shoot wider shots of the players and then an additional CV730 in the casters studio. The control room houses the observer computers as well as the Marshall controllers.”

Marshall’s VS-PTC-IP controller is used to manoeuvre the CV730 cameras into position and between presets as well as paint and fine tune as needed. The CV-RCP-V2 touchscreen CCU is used to shade, adjust and match the CV503 POVs remotely from the control room.

“The ease of use of the Marshall cameras is amazing,” added Forbes. “The menus are self-explanatory, which is very important as our productions are primarily student-run. In addition, having PoE has made our life so much easier, as I did not have to bring an electrician in to get the cameras powered up. The other important piece of the puzzle is the price point. Operating on a university budget, Marshall’s price is spot on. The cameras have proven themselves to be reliable. After the initial set-up, our players don’t even know they are there.”