Promax takes Atl@s to the world

A 6GHz spectrum and signal analyser will be given its trade show debut at IBC2022. The Atl@s NG (Next Generation) includes the latest broadcast standards such as ATSC 3.0 or DVB-S2X along with DVB-T2/T/C2/C/S2/S/DSS. Promax claims the user interface, based on a multi-touch screen and customisable docking panels, ensures ease of use and that the Atl@s NG “closes the gap between the studio and transmission departments”.

The device runs a full 3G-SDI signal diagnosis, including a professional audio meter and eye diagram, and features an external SDI input for that task, other than the standard ASI input and output. 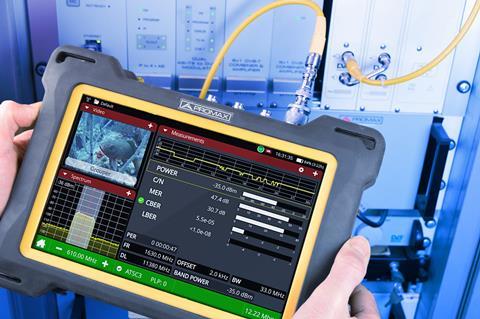 Promax claims that the “omnipresence” of IP technology in the broadcast industry makes it compulsory for an analyser to be capable of feeding from IPTV signals and monitor them. The company claims therefore, that Atl@s NG is “essential to test and monitor and picture several IPTV streams simultaneously”.

It adds that the outer frame of Atl@s NG offers “extreme ruggedness” while featuring a larger 10in touchscreen, maximising grip and ease of handling.