On show from Neumann is the KH 150, a biamplified, DSP-controlled loudspeaker that features the same high-resolution tweeter as all Neumann studio monitors, and a newly developed 6.5in woofer with ultra-low distortion and high SPL capability.

According to the company, part of the Sennheiser group, it has “an exceptionally flat frequency response”, and is recommended for broadcast and music production, including users that require a deep low-end and/or elevated listening levels such as urban music, EDM and film scoring. 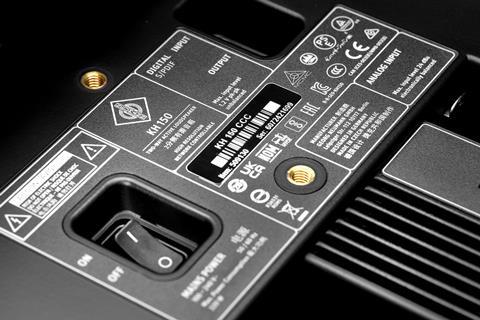 Neumann’s KH 150 is recommended for broadcast and music production

An internal DSP engine offers benefits such as phase linear crossovers and is made to extremely low tolerances of ± 0.8dB.

Neumann says its engineers took great care to develop a patent-pending amplifier technology which combines superior audio performance with the energy efficiency of Class D. Although the KH 150’s amplifiers deliver up to 145W to the 6.5in woofer and 100W to the 1in tweeter, they only consume 17W at idle.

The KH 150 offers analogue and digital inputs (S/PDIF). It will also be available in an AES67 variant with redundant AES67 audio network ports that are fully compliant with broadcast standards such as ST 2110, ST 2022-7 redundancy and Ravenna. The KH 150 AES67 is also compatible with Dante-generated AES67 network streams.