Rundfunk Berlin-Brandenburg (rbb) has installed advanced voice-controlled teleprompters from Autoscript in its new Berlin studio. The state-of-the-art Crossmedia News Centre (CNC) has built in automation to minimise the number of control staff required in case of breaking news.

Using Voice, a new addition to Autoscript’s WinPlus-IP prompting software, means the system actively monitors the production audio feed to automatically advance the script as the words are spoken. It uses real-time speech recognition combined with proprietary algorithms and advanced pattern matching, to ensure the script always scrolls in sync with the presenter. 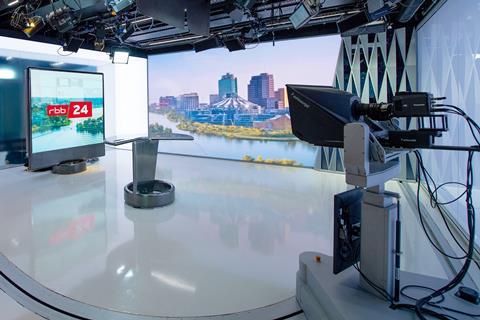 “We installed a plug and play demo system at the rbb for their presenters to trial in offline test broadcasts over several weeks,” said Oliver Gerlach, Partner, Progl+Gerlach, which advised rbb on installing a voice-controlled prompter system. “After successful testing by the presenters and the studio technicians, we supported the install of the system and integration into the CNC. The system is now used in live daily programming.”

rbb is the first broadcaster in Germany to incorporate advanced Voice prompting into its programming. The system is used to produce rbb24, a regional news programme that airs three times daily on weekdays.

The highly automated CNC studio was installed beside the editorial offices as part of a project in which TV and social video formats can be created together. In its control room, only two people are responsible for conducting all programmes and, in the event of breaking news, the presenter can also switch on air alone.