Inside the IP Showcase at NAB 2018

IP is finally on a home run according to 56 vendors and eight prestigious industry bodies behind the NAB 2018 IP Showcase. 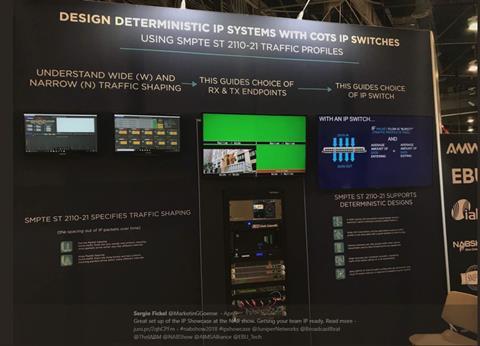 Moving as the showcase does between IBC and NAB we get to see small but mighty significant advances twice a year, and wonder about the temperament and sanity of the people who build such a huge enterprise for five days of scrutiny by end users.

Naturally, we also wonder how many more showcases will be required before the full demise of SDI.

The significant assisting factors are that the interoperability qualification phase has passed, SMPTE ST 2110 now officially exists, AMWA remains the go to army for the quick fixes, and we saw IS-05 have a huge facilitating impact in Amsterdam, which bloomed further in Las Vegas.

To find out how things have moved on, and what has happened (on C12634 in Central Hall) IBC365 spoke to the AIMS chairman Michael Cronk, who is also VP of Core Technologies at Grass Valley, and AMWA Executive Director Brad Gilmer. Real-time IP signal flows are an exciting start point. 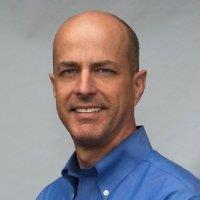 “There are two key things that we are doing different, which speaks to how the technology is maturing. First of all we produced a real live production – stage audio plus the whole control room and the studio all based on ST 2110,” said Cronk.

“Before IBC we were demonstrating what a control room looked like, but the NAB one had real operators making real video, and the integration of that process is smooth.

“Secondly, we have proven vendor interoperability, which we did a number of times including at IBC, so could show eight different wall displays that focussed on the many benefits of IP,” he added.

People could spot the ability to build an IP infrastructure that would handle any future formats; plus demonstrations on scaling, the cable count savings that come with a move to fiber, and how the audio world’s devices interface with SMPTE ST 2130. And the design of hybrid facilities still lingers. What did the NAB crowd think?

“We attracted some really major mogul-level producers plus many others, and everyone was impressed that the stuff is ready and proven,” said Cronk.

“One or two things are not done but being worked on. Within SMPTE right now work is being done on the ability to add compressed video streams in the ST 2110 family, and how to send those streams via IP.

“That will be a big development because it opens the doors for a lot of other applications. The other thing we showed is the development and growing maturity of the AMWA specifications (IS-04 and IS-05),” he added.

“The connection management is very important. Visitors could see typical and familiar router panels from multiple vendors: they could do source destination take on these and switch video, and it looks like you have switched video with SDI. The difference is that all those different vendor panels are talking the same exact protocol because it is an open specification.” 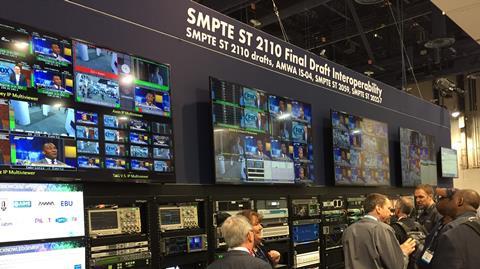 Users can now plug something in and understand what it is because there is a conversation between the devices. Another advance has come with better monitoring, and those who saw the IBC IP Showcase will be hooked on IP thanks to these advances. Will it be specifications not another standard that push things along?

“AMWA is a quick and agile organisation, and it works with SMPTE in multiple ways, but one of the key routes is through the JT-NM taskforce for networked media. There is more collaboration on these types of things than I have ever seen before in the industry,” said Cronk.

So how many times will the IP Showcase travel between Europe and the US, like the Buffalo Bill Wild West Show did so many decades previously?

“If you look at a market adoption curve, momentum is building tremendously but IP is not mainstream everywhere yet. There is more adoption that has to take place over time, so the IP Showcase needs to follow that curve and meet the needs of the group that is next in line,” said Cronk.

“For sure the IP Showcase will morph and change, and we do have plans to be at IBC. We always deliver and then talk about is it time to do something else, but right now it is important to get to IBC and show the progress over the past year,” he added.

Has anything changed for AIMS, because its early days were about generating market support for a standard at the transport layer, which is what SMPTE ST 2110 is.

“At a high level the goals are the same. But as we move through the adoption curve some of the actual actions and emphasises change,” said Cronk. “We are moving into a phase where our focus is more about what we call operational interoperability - how do we make the user experience seamless.

“We continue with working groups where we identify technical gaps. We have 96 members, including pretty much all the major vendors, so as we implement these systems we understand the gaps,” he added.

Cronk was keen to emphasise AIMS’ educational role, and it recently published two white papers, but any gaps are jumped on.

“We recently saw one and have a base proposal, and are in the process of moving that to SMPTE for more rigorous development. In any technology shift there are lots of gaps to address for making the user experience better, so there is quite a bit of work for AIMS into the future along those lines,” he said.

The road to dematerialised facilities

Explaining the AMWA ‘wall’ studied by thousands of NAB visitors, Gilmer said: “It showed working examples of IS-04 for discovery and registration and IS-05 for connection management, but importantly, it has also contributed to the start of a discussion about the next phase on the JT-NM Roadmap, which is about dematerialised facilities. 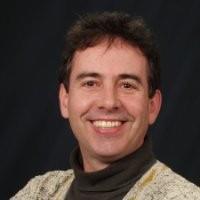 “This represents the time when media centres evolve from installations with capital-intensive, custom-built hardware to cloud based storage, processing and distribution using off-the-shelf IT hardware. This transition is some way off, but discussions are starting,” he added.

The AMWA has published specifications for IS-04 and IS-05 so that suppliers can implement the APIs in their developments.

“Further functionality might be added in future, as new work groups are established to satisfy newly identified user requirements. For example, scalability, high-level grouping, security and events and tallies are all being considered at present,” said Gilmer. “While we always ensure that backwards-compatibility is achieved, the specifications continue to evolve and grow.”

Booth C12634 featured a long programme of mixed 20-minute technical and operational sessions including one on BBC Wales, and another on IP advances in Timeline’s OB trucks.