Evolution of the 4G standard will continue for some years but the tipping point will come as consumers demand a better experience.

The advent of 5G in the near future is both an evolution and a revolution, providing a step change in terms of network speed, capacity and latency. Speaking at the opening IBC2017 keynote session, ‘5G beyond the hype - What does it really mean?’, Mansoor Hanif, director of converged networks, research and innovation at BT, explained that the arrival of 5G heralds an exciting new chapter in the epic saga of networking.

“The upcoming transition from the hugely successful 4G standard – which has transformed the way we use smartphones around the world – is a bit like the Star Wars saga,” said Hanif, who has been building networks for nearly 25 years.

“The rapid evolution of 4G, which was followed by 4G Advanced and the upcoming 4G Advanced Pro, is like episode 5 of the 4G saga right now. The 4G story isn’t over yet, another three episodes will bring us to the year 2020, which will be the tipping point for the introduction of 5G, as customer expectations rise and operators battle to get customer experience ahead of customer expectation.

“This progression, in terms of offering higher speeds, higher capacity, controlling the cost and offering lower latency will be very difficult to maintain beyond the ninth episode of 4G. We will need a whole new sequel, which is 5G. That’s the evolution.”

The revolution, he continues, comprises several new characteristics that are unique to 5G and that ensure that the standard provides a compelling business model to justify investment while keeping costs reasonable for customers. The 5G network will be completely flexible, agile, programmable and highly automated, while being ultra-reliable. It will also be fully virtualised.

“To keep the 5G business model competitive, we need to step into vertical industries and generate new sources of revenues and these characteristics will allow that,” he added, highlighting a particular relevance to the broadcast industry, which has been limited by the unavailability of sustainable and scalable networks that guarantee various uplink capacities, on demand, for their satellite trucks over 3G and 4G networks.

“It’s feasible in some cases as a ‘hammer and nails’ type of job but it’s expensive, time consuming and SLAs are very difficult to change. With 5G, this can all be automated rapidly to adapt to individual customer demands, over the same signal, platform and architecture. It will be cost-effective for the customer and manageable from the operator’s perspective.”

The outside broadcast (OB) world will benefit in terms of quality and transmission capabilities when it comes to video distribution, and the convergence between the SDN and NFV world and the network slicing world is a topic of great interest to the BT labs. “It means we will be able to offer a much more efficient, dynamic and configurable way of transmitting media content from the source to the production labs.”

A whole new generation of entertainment services, based around real-time communications, also requires a complete change in the way networks are designed. “For broadcast, we want to leverage the IP Multimedia Subsystem (IMS) evolution within 5G to both accelerate new services and support virtual and augmented realities,” concluded Hanif. “5G should allow us to cut the wire for VR and AR headsets, and network-based AR will become much more compelling as a result of 5G.” 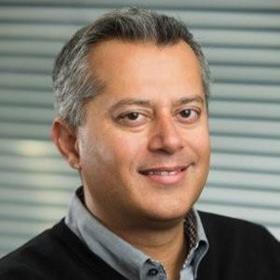 Mansoor joined EE in November 2011 and led the technical launch of the first 4G network in the UK and was also accountable for the integration of the legacy 2G and 3G Orange and T-mobile networks.

Until 2016 he led the team who plan, design, rollout, optimise and operate all EE radio access networks, including Mobile Backhaul and Small Cells, and was accountable for the coverage aspects of EE’s Emergency Services over LTE programme.

He was also a board member of MBNL (the joint venture of EE with H3G) until 2016. During the acquisition of EE by BT, Mansoor led the EE network Integration team and is currently Director of the Converged Networks Research Lab based in BT’s Global Research centre in Adastral Park.