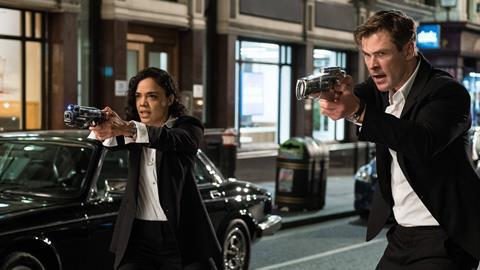 Behind the scenes: Men in Black: International

The MIB reboot opened last week. IBC365 goes behind the scenes with VFX Supervisor Alessandro Ongaro to find how he created a world with aliens living on Earth. 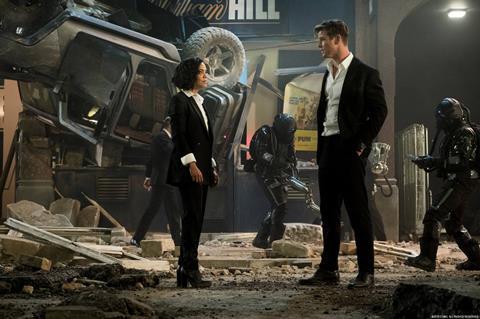 Director F Gary Gray’s ‘International’ reboots the 20-year-old Men in Black franchise with a new pair of clandestine agents to guard the Earth against alien invasion and succeed the characters Will Smith and Tommy Lee Jones made famous.

Facility DNEG took the lead on the VFX-driven story creating 581 shots across 18 sequences showcasing a broad range of techniques, from the development of complex FX simulation to the creation of hero creatures.

Work on the MIB’s London HQ carried the highest shot count. This entailed extending the height and width of the physical set built at Pinewood Studios in CG and compositing in holograms, designed by London agency Territory Studio. 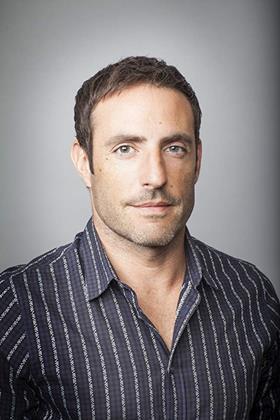 The main work was animating Guy and Nerlene, a pair of alien investigators. “They initially had a bigger role in the film and were the only two characters which were basically 95 per cent approved early on,” explains Alessandro Ongaro, the film’s VFX Supervisor.

The original design of Nerlene, by New Zealand’s Weta, featured a head with exposed brain textures. Considered a little too gross by the producers, DNEG modified the look before building the characters with blend shapes and key frame animation using the actors shot on set for reference. Nerlene required a CG head comped onto the actor’s costumed body while Guy was a full upper body replacement.

The most complex VFX sequence of the film is set inside and outside a nightclub where agents H (Chris Hemsworth) and M (Tessa Thompson) are assigned to visit playboy alien Vungus.

“This is a pivotal point for the story and Vungus was fully digital from head to toe,” says Ongaro. “He had to interact with H and M with full facial animation via keyframes.”

The character’s initial design was also developed at Weta but when DNEG boarded the project in September 2018, the film’s producers wanted a rethink.

“The design was this alien mix of frog-like face, wide mouth, mushroom head and protruding eyes and they wanted to go more human like,” Ongaro explains. “In the scene there are a lot of alien and human characters, but they all blend in and this character just stood out as too different.”

“The detail and texture had to be exact,” he says. “We made 1000 blend shapes, all animated by hand.”

Key framing
The work was complicated because the animators didn’t know which actor’s performance to base the animation on. The early plan was to replace the stand in actor Kayvan Novak with a celebrity or star actor but for one reason or another this didn’t materialise. The filmmakers were in any case pleased with Novak’s performance and decided to stay retain that as the basis of the character animation.

“We tried performance capture but because we weren’t sure if the actor was going to stay the same or be replaced, we decided it was too risky to try and build a rig to motion track the actor’s face and opted to key frame instead.”

This was challenging because the look design was constantly changing and very different to the actor’s human face. “I think we did pretty well and were able to give the eyes a slightly human look in the iris and pupils and the way the eye is built but facial movement was very limited because we couldn’t capture all the subtleties of the actor’s performance.” 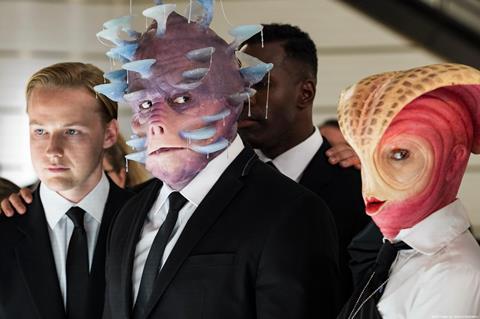 Key framing is a laborious task and one that in future will be aided by using machine learning techniques of the sort which enabled Digital Domain and Weta Digital to speed the performance captured animation of Thanos in the two recent Marvel Avengers’ movies.

“They did a lot of prep and testing for Thanos over more than a year before post production, plus they knew that Josh Brolin was going to play the character,” Ongaro says. “In our case because of question marks over actor changes and design approval it would have been impossible to do that. When you use ML, you start out with a copy of an actor’s facial rig data and you must learn the different way they move and understand how to map those to the digital character. Since we didn’t have enough time, we decided not to try that approach.”

Scenes outside the club were partially shot on a soundstage, partially on location at Ludgate Hill, with the whole environment recreated by DNEG to include a pair of intergalactic assassins called the Twins.

“The pitch from the studio was that these aliens are made of pure energy. We designed them to look as if they are composed of a galaxy so that when the body breaks apart and reforms the effect resembles that of a nebula.”

‘Magical effects’
Much of the additional work on what Ongaro calls “magical effects” was handed off to Method Studios.

DNEG also split the shot count on the show among its global divisions in order to work around the clock in different time zones. The night club exterior scenes for example, were split between units in Vancouver, Mumbai and London. DNEG Montreal also worked on the show. 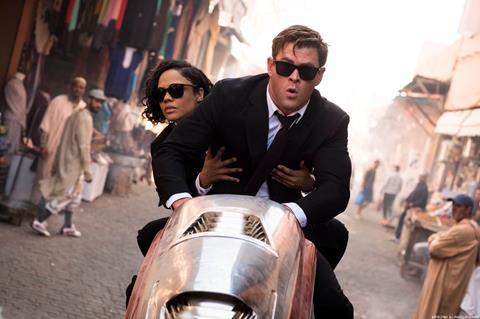 On location: Some scenes were shot in Mumbai

“Because schedules were so tight the only way to get all those shots through was to work 24/7,” Ongaro says. “I was managing workflow and reviewing shots over the different sites staring very early in the morning to talk with Mumbai then London. Sometimes I’d stay late in the evening to talk with Mumbai again. Personally, it was very tiring.”

Usually on a VFX-driven blockbuster, the lead vendor would be involved in pre-production and ideally on set to establish a better sense of the work required. DNEG were awarded the work on MIB: International pretty late in the game when production was virtually over.

“On my previous film Ant-Man and the Wasp I was on set for two months and involved in the second unit shoot for a car chase that DNEG was responsible for,” he says. “It’s very useful to understand how a scene is shot in order to feed that into post. In this case it was not a smooth road. We didn’t have enough time to do proper post-viz (using on set tracking and camera data to start visualizing shots) and we were receiving changes on almost a daily basis.”

Swiss born Ongaro has spent five years at DNEG in Vancouver working on projects including The Meg and Miss Peregrine’s Home for Peculiar Children before which he’d spent over a decade as VFX supervisor at Dreamworks Animation.

“When you work on projects like this you work with a crew for six months spending many long hours in the company of very talented people and that teamwork is something I value. What satisfies me is seeing a shot created from literally nothing to emerge as part of the finished film.”