As the world of esports streaks ahead, Joe Lynch of EA looks to maximise the storytelling and get the most out of in-house broadcasting. 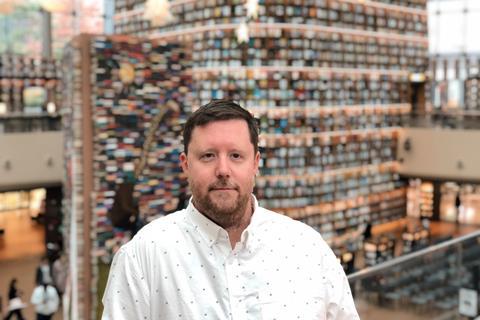 Joe Lynch has helped to broadcast the likes of WWE and Oprah to the world, tackled international broadcasting in China and more recently lent his skills to GoPro in the US.

A speaker at the “Entry into esports ROI and expectations” session at IBC, Lynch has been the head of broadcasting at EA for the past two years. The Rhode Island native is responsible for beaming the company’s esports events to the devices and screens of legions of fans worldwide.

The US games titan is currently investing heavily in airing its own programming and covering the breathless calendar of global esports events. Lynch’s background gives him an excellent perspective on the rapid evolution and progression that’s taken place in the esports sector, and how the company is capitalising.

Two lightspeed years
“It’s night and day,” Lynch states, when quizzed on the progression that’s taken place in the esports sector in recent times. “It’s a completely different animal than it was two years ago.”

The breakneck progression of esports from an up-and-coming craze to a massive, engaged and internationally distributed fanbase is all but complete, with one report indicating 380 million viewers last year on a global level. Lynch has seen the competition for eyeballs increase dramatically, as well as the pressure to innovate.

“Now, there’s so much more that we have to do to keep an audience,” he points out. “You look at any (TV) show back in the day, when there are only three channels, you can produce something, and you get people to watch it. But now that there’s 5000 channels on 800 platforms, you have got to do something pretty special to get an audience.”

“So for us, it’s about how do we evolve? How do we make our content better, more engaging and more interesting to get an audience?”

Addressing the need for more compelling content on a constant basis led to Lynch spearheading the creation of a first for EA, an in-house studio where the best EA games could be showcased to their full potential in front of a live audience and also broadcast live to the huge esports community.

Alive inside
“It’s my baby” says Lynch, regarding EA’s Esports Broadcast Center, which officially came on-stream in March of this year, with a broadcast of the studio’s popular Madden football title.

With all the slick visuals of a ‘traditional’ sports studio, the centre, located at EA’s offices in Redwood City, California, means that the company now has a fully-equipped esports location with substantial audience seating. For Lynch, establishing the studio meant both cutting down on costs associated with external agencies and events, as well as allowing the company to develop in-house excellence in broadcasting these kinds of events.

”When we do have events, we invite all of the company to come and be guests and to be in the audience.”

“We were spending so much time on the logistics of production that we weren’t spending a lot of time on the actual content and creation. We started thinking that there’s got to be a better way to do this.

“It’s changed the entire atmosphere of the campus,” continues Lynch. “EA is a very established company, (but) to be honest, with all of the groups within the company, a lot of didn’t really understand what we did.

“They knew what (esports) was, they weren’t totally oblivious to it, but what went into it was just something they didn’t understand,” he adds. “Now it’s on campus. When we do have events, we invite all of the company to come and be guests and to be in the audience.”

A viewership demanding authenticity
Broadcasting competitions at EA’s HQ and around the world has helped Lynch solidify his understanding of how esports can demand more than traditional sports broadcasting.

Other than the necessary trucks, lighting, venue and cameras, esports in 2019 generate huge network demands, as well as the need to recruit professionals who can grasp the minutiae of the games themselves.

“Now with esports, you can’t function without a gigantic pipe,” he says. “You need to be able to get the game out, you need to be able to connect to the server, you need to do all these different things. You can’t be on a shared network with anything. Networking is just such a bigger piece of it. So I think from a technical perspective, I think that’s the biggest hurdle.”

Ensuring that the production staff involved are completely up-to-speed with the constantly shifting and version-based nature of the games is also crucial. Committed fans will keep a sharp eye out, to ensure production aspects are kept to rigorous standards.

“I’ve worked with directors, teams, people that have done some of the most amazing work I’ve ever seen,” notes Lynch. “They can’t hang in esports because they don’t understand it.

“You can get someone that does tennis and put them on F1, or put them on whatever, and they can get through it. With this, if these people don’t understand it, it’s not going to work. So it’s a pretty difficult thing to crew.

“You can’t fake your way through anything. It has to be truly authentic to the community, or it’s not going to work.”

New avenues to monetisation
For EA, the investments involved in these live events are part of a coordinated revenue strategy. Lynch breaks these down into two roughly defined streams, each of which delivers revenue.

“The two main factors as we look at ROI from a competitive perspective are in-game revenue and out-of-game revenue. Obviously, as we do these events, it’s encouraging more people to play the game. That means immediate results for everyone.”

“The out-of-game revenue is (largely) sponsorship, media rights, and ticket sales, and all those other things. We’re at the point now where we’re just really starting to crack the nut on that.”

A big part of the out-of-game revenue comes from in-game sponsorship, something that EA’s suite of sports-based games can very easily integrate, while not detracting from the live entertainment that is attracting viewers. If it can be placed on a game-side billboard or on a virtual player’s shirt, it’s a strong advertising opportunity.

“With Madden this year, they’ve signed on some really great sponsors,” points out Lynch. “Starbucks and Snickers, and a few others. FIFA has Turtle Beach, and Sony and several others.”

The company has also been able to bring online new streams of revenue that will maximise on the esports aspect, well outside of the likes of traditional EA Sports games like Madden and FIFA.

On revenue strategy: ”The two main factors as we look at ROI from a competitive perspective are in-game revenue and out-of-game revenue.”

Last year’s breakout success of Apex Legends, a major success produced by EA-owned Respawn, has opened up new opportunities. After smashing the record for first-week downloads with an eye-watering 25 million global instances, the game allowed EA to take a chunk out of the red-hot ‘battle royale’ game market.

This meant that the company could begin to retail the likes of premium in-game currency in an explosively expanding environment, to allow the purchase of extras like cosmetic skins for characters.

For Lynch, the arrival of a game like Apex Legends, which is practically tailor-made to facilitate esports, is manna from heaven in terms of engagement.

“I love Apex” he stresses. “The world that they’ve built: Kings Canyon, it’s just such a fun place. The characters; you’ve got Octane, you’ve got Mirage, they’re all really great characters who can lead to a personality of a show.”

“As Apex competitive gets underway, we’re going to lean into the personality of the game and not just the action. We’re going to have a lot of fun with the tools that they’ve built. John Nelson, who’s our commissioner, has put together an unbelievable structure for a competitive event and for a league that I cannot wait to really dig into.”

Keeping at the bleeding edge
As EA ramps up its esports activity and continues to get involved with events around North America, Europe and Asia, Lynch knows that he needs to keep abreast of any key developments that can add value to the viewer experience.

He defines this simply as ‘What’s next?’

“As we move forward, not only from a storytelling perspective, but from a technical perspective … what are the new toys that we’re going to have to play with? When it comes to AR, VR, and so on.

“As someone who has a studio, and is constantly looking for ways to move the ball forward, what are the things people are working on? [what can we] take and apply to what we’re doing?”

With his experience in the traditional broadcasting world, he’s keen to fold any sort of new innovation from the broadcasting sphere in general into the esports realm.

After all, storytelling is universal.

“That could be from what traditional sports or from traditional TV,” he explains, “Somebody may have had some ideas for a graphics engine to do XYZ, but I can actually use it for different things.”

Even for a company as big as EA, a relative newcomer status in the broadcasting field means that it can still try things, experiment and test new approaches in the live scenario.

It’s one of the aspects that Lynch is most positive about.

“We’re not ESPN, you know, we’re not Fox Sports. We don’t have that gigantic infrastructure. I’m okay with (working with) an untested piece of technology, to see if we can’t play with it and make something really cool out of it.

“We try and keep that smaller, entrepreneurial vibe to it so that we have the ability to be nimble,” he says. “That’s pretty important to us.”

Joe Lynch will be speaking at the Entry into esports ROI and expectations esports session on Tuesday at IBC2019.