Broadcasters and agencies must learn to speak the same language, if those in advertising are to reap the rewards of the golden age of TV, says Jon Block.

A large threat to the broadcast advertising model from large digital pure-play players such as Google or Netflix is likely to drive the rapid adoption of programmatic and addressable advertising by the broadcast industry, according to Jon Block, EMEA VP of Product and Platform at Videology.

Block’s background, which first saw him working as head of advertising innovation for ITV, the UK’s largest commercial broadcaster, before moving to video advertising platform Videology, has left him genuinely invested in the future of the broadcast world, despite having moved to the ad tech side of the fence. 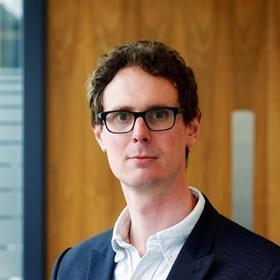 “I perceive a macroscopic threat from the big digital pure play companies such as Google, YouTube and Netflix, primarily,” says Block.

“Their advanced capabilities, monopolies in various areas and sheer size mean that they are also able to act as a distribution channel.

“I believe they are trying to capture the entire value chain that currently lies between the broadcaster and the advertiser, and I think that’s incredibly threatening to both industries that work so closely and equitably together.”

Netflix is also in an incredibly powerful position to tap into the TV advertising paradigm, because people are watching it in a very TV-like manner, according to Block.

“Everything points towards Netflix moving towards an ad-funded model of some sort in the next couple of years as they have very little other space in which to grow. That move will be the impulse that causes the broadcast industry worldwide to fully embrace programmatic and addressable advertising in the way that they should, because of its power.”

“I perceive a macroscopic threat from the big digital pure play companies such as Google, YouTube and Netflix”

Block is at pains to outline the benefits that the broadcast industry can derive from the power of both programmatic and addressable advertising, which have to date been met with varying degrees of resistance by the traditional broadcast world.

“From a content point of view, we are in the golden age of TV,” he adds.

“From an advertising point of view, we are not there yet, which is why the industry should embrace the opportunity for addressability in TV advertising and the technological improvements available in the area of automation that will support the commercial trading models that are set-up between agencies and broadcasters.” 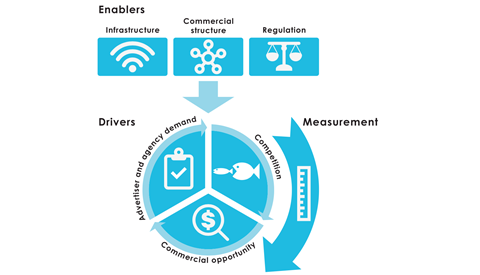 Programmatic and addressable advertising can work either together or separately to achieve results for both broadcasters and advertising agencies, according to Block, who has seen how far advanced the advertising industry has come and how much distance is yet to be covered by broadcasters in terms of enhancing their yield and targeting strategic audiences.

“There’s a lot of opportunity out there if broadcasters can move from selling content-based advertising to combining both content and audience profiles, whether demographic or behavioural,” concludes Block.

“Today, broadcasters and agencies aren’t really speaking the same language when they are trading their inventories.

“That’s one of the biggest challenges right now and it involves broadcasters adapting existing commercial models and getting to grips with overlapping audiences through mathematical optimisation.

“In reverse, the broadcast industry can share about half a century’s worth of compliance and brand safety experience with the ad tech agencies in the digital world, that are struggling with that particular challenge right now.”

Having broken free from his background in coding and technology, Jon Block is now making a career out of being an “acceptable face of geek” in the world of TV advertising. First at ITV where he headed up advertising innovation for the UK’s largest commercial broadcaster. And now at Videology where he is EMEA VP of Product and Platform for one of the world’s leading video advertising platforms. With his degree in Natural Sciences from Cambridge University and the Royal Television Society’s Young Technologist of the Year Award, Jon was destined for a career in some back room, hidden away from the public. However, he was given the chance to change this at ITV when he created and then led the broadcaster’s multi-platform ad innovation programme. In this role he did everything from developing new interactive ad formats and dual-screen concepts to speaking publicly about the exciting opportunities where TV and online converge. In 2015 he moved to Videology where he is leading the product and platform vision for the EMEA region, helping to support broadcasters and advertisers to use Videology’s technology to ensure that the right adverts reach the right people at the right time. In his spare time Jon is a father of three, a keen photographer and player of jazz standards on the ukulele, although rarely at the same time. He also likes to write his own biography in the third person, which is, frankly, a bit odd.