New views of the news

The latest internet technologies can put radio programmes on video, stream footage from an iPhone, and place audiences in the centre of the action, BBC News’s Morwen Williams tells Paul Bray. 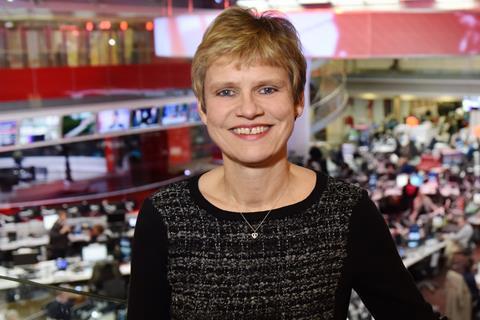 On one day this summer the most watched piece of video on the BBC News website was a story from the Today programme, about Manchester United FC’s “class of ’92” setting up a course at the University of Lancaster. There is nothing very remarkable about a flagship, agenda-setting news strand topping the viewing table, of course. Except that Today is a radio programme – not a medium that traditionally troubles itself with video.

When Morwen Williams, head of UK operations for BBC News, says that “cross-platform is the way forward”, this is exactly the kind of thing she means.

She is responsible for creative technical news gathering for stories as well as all news studios in London and at MediaCityUK in Salford, managing a team of more than 700 people. Prior to this she worked as a producer in BBC regions in London and Manchester, finishing as BBC News’s deputy UK editor, leading on major events across the UK.

“We need to make content available across as many services as possible, from Instagram to Newsnight [BBC TV’s highbrow, late evening news magazine],” she says. “‘Versioning’ has become a big thing, and nobody makes a TV programme without putting out tasters on Twitter.”

So it is entirely logical that one of Williams’s first decisions, when she took on her current role in January 2019, was to amalgamate the video and audio sides of BBC News’s technical and studio operations. In a cross-platform world where every programme is potentially a ‘Gesamtkunstwerk’, a traditional separation of powers no longer made much sense.

The typical audience member – whether viewer, listener or reader; zapper, clicker or swiper – would doubtless agree.

‘We want truly connected, mobile journalism to enable us to get responses to breaking stories as efficiently and effectively as possible’

“Keeping up with audiences is a constant challenge,” says Williams. “There’s much more demand for mobile and digital content, for example (and not just from young people). We need to maintain our pre-eminence on all platforms and use analytics to understand how our audiences want to consume their news.”

It is not just audiences who can benefit from mobile and digital technologies. The broadcasters can do so, too. High on Williams’s agenda is a desire to do more things remotely and over the internet, which is fast taking over from satellite.

“It’s more lightweight, more flexible,” she says. “We want truly connected, mobile journalism to enable us to get responses to breaking stories as efficiently and effectively as possible.”

An important enabler of this is the astonishing technical quality of the latest commodity, consumer devices. “The line between professional and consumer products is becoming very blurred,” says Williams. “A £2,000 camera can produce really excellent pictures – five years ago a news camera would have cost £30-40,000. Even the camera in an iPhone 8 is broadcast quality.” 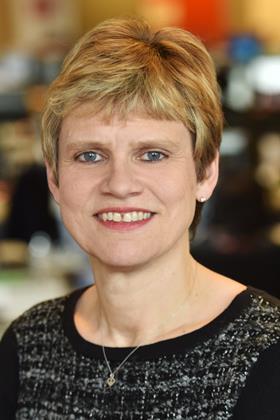 Williams: “I’m a big believer that to do this job you have to understand the news”

Viewers can judge for themselves. One of the biggest stories in the UK this summer was at Whaley Bridge, Derbyshire, where a storm-weakened dam threatened to give way and inundate the town at its foot. The first BBC journalist on the scene arrived before her camera crew, and was able to stream pictures from her iPhone directly into the news server.

“We use a very innovative app, designed to be very easy to use,” says Williams. “It’s pre-populated with information for the journalist and sends back a text message to confirm receipt. It can even separate off the audio for radio use.”

The app sits on the iPhone’s regular ‘share’ button. “I specifically wanted it there because that’s how we do things in our everyday lives – sharing pictures of our kids’ birthday parties etc,” says Williams. “It means that if the journalist is up against it on a breaking news story, they instinctively know exactly what to do.”

News background
Williams understands journalists’ needs and methods so well because she is one, having spent most of her career covering major events as a producer. “BBC News specifically wanted a journalist to run the operations side, and I’m a big believer that to do this job you have to understand the news: what makes a story, how to tell it better, how deadlines work. Journalists also need to have technology explained to them – why a new procedure is relevant to them, how it will enable them to do their jobs better. Otherwise why should they use it?”

One thing some journalists need to be convinced of is the security of material held in the cloud, a point Williams will doubtless be stressing when she takes part in the IBC Forum panel discussion, Seeing clearly in the cloud – strategies for business transformation.

“The big technology companies roll their eyes and say, of course it’s safe,” she says. “But a lot of journalists still like hard drives in drawers, locked away so they know their data is secure.”

The issue these days, however, is the size of the drawer, as well as enabling (legitimate) access to its contents.

“The cloud really is becoming essential for news,” Williams insists. “There’s the sheer amount of material you can store, plus the immediacy, flexibility and universality that the cloud enables. It enables truly end-to-end production, with camera footage fed straight into the cloud, into production and then distributed in high quality almost immediately. Compare that approach with waiting for a satellite truck to arrive.” 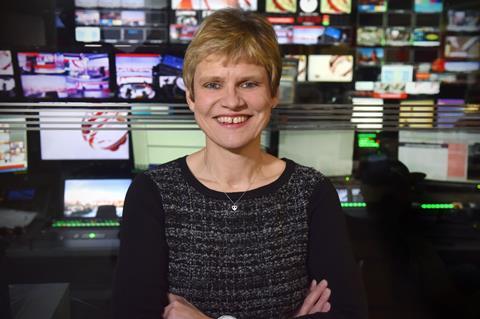 Williams in the studio

Nor do you need a helicopter to get an aerial shot. “The game changed a couple of years ago, when you could start buying fold-up drones for less than £1,000,” says Williams. “Producers almost expect drone footage now, and we have probably 40 camera operators who are fully qualified drone pilots. I can see it becoming a standard skill for them in future, although it has to be properly managed: you have to keep up your flying hours, for example.”

New technologies are always simmering away in the BBC News labs. Artificial intelligence could be applied to anything from checking the provenance of news material (was that picture taken yesterday or has it been doing the rounds for years?) to cataloguing the BBC archive. There is interest in whether gaming technology and gaming skills could feed into immersive news presentation. And an app that automatically translates audio into other languages, like a real-life Babel fish, is already being piloted.

Other science fiction-like technologies are already here. Good journalism has always been about putting the reader, listener or viewer at the centre of the action, and with 360° virtual reality this has become almost literally possible for anyone with access to a VR headset.

“A few years ago we bought some quite cheap 360° cameras, with which our journalists have created some very strong pieces,” says Williams. “We’ve taken viewers down the Nile and Congo rivers, visiting the communities on their banks. We’ve filmed in 360° at the Holy Fire ceremony in Jerusalem, and at the rocket launch when Tim Peake [the UK’s first astronaut] was blasted into space.”

Viewers of the latter might have been surprised to hear a youthful voice behind them shouting, “Bye, Daddy, bye!” Spinning around, suddenly they could see Peake’s young son beside himself with excitement, cheering him on.

The epic and the human in a single shot. Isn’t that what news journalism is all about?