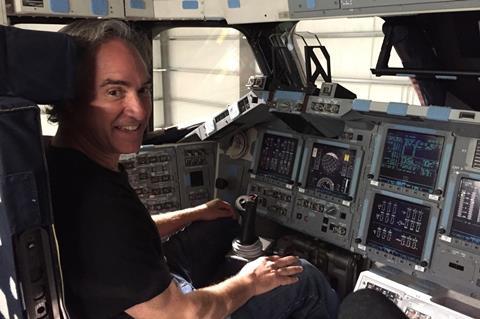 Remote working is second nature to Ted Schilowitz, Paramount’s resident futurist who adds - without irony – he’s just been waiting for the rest of the world to catch up with him.

“My work’s always been about remote everything and digital assets - many of the things that have become everyday occurrences now have been part of my word for years,” he says.

Home-based since the pandemic forced Hollywood’s studios to shut six months ago, the man responsible for shepherding Paramount’s future – and that of its parent enterprise ViacomCBS – has lately been involved in advising staff on how to manage remote workflows and video coms during lockdown.

“My main advice is just to get comfortable with it, it’s just another way to communicate, to understand things like network latency, to be short and pithy with your responses and to try not to talk over people.”

On this latter point he adds, “Duplex communication hasn’t caught up with video world. If you are in a big group of 40 people there is the software out there to alert people to the fact that you want to say something - but nothing beats just raising your hand.”

With a remit to explore new technologies, new platforms and new ways of working, Schilowitz is also looking beyond the video call, and is encouraging content creatives to use VR tools and avatars for social, business and personal communications.

He adds that the company uses a cross-platform software called Spatial to enables users to use their own choice of VR or MR headsets.

“It’s working well, we’ve moved beyond the experimental phase. We can do strategy meetings, creative meetings and project planning meetings and we can bring up all these assets as if we were in a real room,” he says.

“Think about any kind of conversation that you’d have over lunch, a dinner or a coffee with a small group of people versus sitting by a video window with two computers. Almost anything can be better if it feels more real.”

Extending reality
Part of Schilowitz’s role is to keep tabs on consumer trends and he adds that what audiences choose to do in their leisure time forms “the broad starting point” for most of his future mapping.

In the case of VR, he notes that the Home Entertainment sector has seen a massive uptick since the Pandemic, as people spend more time at home and look to take a break from the real world – to the extent that there were reported shortages of Oculus Quest headsets for a time.

While most content consumed on these platforms is interactive, Schilowitz observes that the medium is slowly evolving to offer experiences that are “more of a mix between passive engagement and interactivity” – something that arguably works better on TV platforms.

It’s an area he notes, that Apple is keen to move into, with news reports last month claiming the tech giant is set to add AR content to its Apple TV+ streaming video service.

‘Bonus’ features may include characters or objects from a show that are able to integrate into the surrounding environment.

Schilowitz believes that this is a precursor to what Apple has been working one the last five years, the endgame being its own VR/ MR headset/ glasses. He notes that Apple’s move into AR TV also follows the acquisition of a series of immersive startups, the most recent being Next VR, in May.

“Apple hasn’t talked specifically about headsets, but all you have to do is look at the companies they’ve acquired and the tech that they’ve implemented and the job postings and you can make approximations that they are working on something big in this area,” he says.

On how this might shape content specifically, Schilowitz is not yet clear, but he predicts that in the next three to five years (“or five to seven if we’re being conservative”) there will be a “huge piece of MR cross platform entertainment content” that is set to “eclipse Pokémon Go in terms of its magnitude”.

On Paramount’s own plans all he will reveal is that it is “definitely working on lots of things that relate to that.”

Branching narrative
Another big area for the studio is choose-your-own-adventure-style branching narrative TV shows, especially for Viacom’s Youth brands, which include MTV, Nickelodeon and Noggin.

He adds however, that TV branching narratives are still very much in their infancy.  “I don’t think that it’s a very mature pursuit yet when you compare it to how video games tackle narrative - but its something to keep a close eye on.”

The way the games industry continues to have a huge impact on the way TV and film content is made - thanks to the real time 3D rendering capabilities of gaming engines such as Unity and Unreal - will continue to evolve, he predicts.

“Games engines have become hypercritical to us- especially in the age of the pandemic. Just from a safety standpoint we continue to look at virtual production, virtual backgrounds, and continue to be more successful in making that movie magic happen,” he says.

Volumetric video
There’s a vision that in the not-to-distant future as we move from the flat screen into the spacial realm, it will be possible to move around inside live action video and cinema imagery, which may lead to new kinds of Holographic-style immersive entertainments.

Volumetric capture and video is area that Schilowitz is deeply invested in. He’s involved in a number of startups in this area including 3Infinate (formerly HypeVR.

However, he is less impressed by the big tech firms’ early explorations into this realm – the 2018 Red and Facebook volumetric project Manifold being a prime example.

“That’s a case of a  ‘Look See” discussion involving two very large companies who were trying to throw as much of a resource tree as they could at something without the intimacy and understanding of how to tackle a problem,” he says.

“Big organisations are not getting it right yet and are tending to acquire smaller start ups which are. And that’s an area of long-term purist for me - and others,” he says.

A more successful Red foray was convincing Hollywood to move to digital away from film – something that Schilowitz played a key role in at the time.

“Considering Red very much changed the face of that industry, I still don’t think that it gets the credit it deserves,” he muses.

Another move that earned him his futurist stripes was through the co creation and launch of G-Tech’s advanced hard drive storage products - ultimately bought by Hitachi and used worldwide.

According to Schilowitz, a common denominator in successful launches is having the foresight to understand what the market wants and being able to deliver on that promise.

“It’s a deep study of the desire for people to have the best creative tools that they can, without the shackles and restrictions of one that very few can access.

“The tenant of my professional career has been: If you can build something that is exceptionally good, and also breaks down barriers to entry, you have a successful combination.

“That opens up huge horizons for so many more people to be a part of it – and if you can enable this, then amazing things will happen.”