Belden has struggled with the “volatility” of Grass Valley’s broadcast business, but a new owner in the form of a private equity buyer will give the company a chance to invest and ”retrench”.

That’s the view of Grass Valley president Tim Shoulders, who spoke with IBC365 after Belden announced that it will sell Grass Valley.

An investor is now “likely to be announced in a matter of months not quarters or years”, Shoulders said.

“The interest we have received is primarily with private equity firms without a media business but with no overlap to Grass Valley, which I think is great news for our customers in that they have nothing to worry about when it comes to the Grass Valley business entering an arrangement with a company that has conflicting product lines.”

Belden chief executive John Stroup previously described the broadcast business as being “lumpy” and difficult to predict which he said can cause unwanted surprises for investors.

When asked about Stroup’s view of the industry, Shoulders said that “as a publicly traded company with quarterly obligations to provide steady growth, Belden really struggled with the volatility of the Grass Valley business.”

In contrast to the bulk of Belden’s business, which is primarily focussed on enterprise and industrial markets such as automotive and oil and gas, broadcast equipment vendors can be dependent on live events such as the Olympics and FIFA World Cup as well as the build of new broadcast facilities. 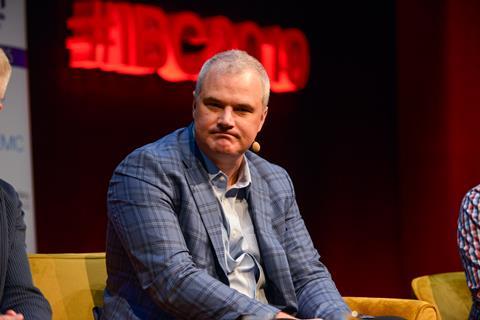 “This was harder on the Belden business and Belden shareholders who want to see steady consistent growth and revenue,” said Shoulders.

Addressing Stroup’s “lumpiness” description, and its potential to deter buyers of Grass Valley, Shoulders said: “It certainly is a factor that will bring certain types of buyers into the room but those buyers are one already understand the media and entertainment space and understands that the business will go through cycles and prepared to work through cycles.”

The nature of broadcast operations, he explains, means large projects are often pushed across quarters.

However, Grass Valley is a “well-disciplined and strong business which is producing cash flow,” he said.

“We are not a turnaround business, but we are healthy and one of the largest revenue businesses in the industry, with efficient scale and market reach with our service and sales team that most of our competitors envy…if you notice in 2019 each quarter our revenue is roughly the same around $88 million and our earnings before interest, taxes and depreciation evens up, which is the common measure of profitability.”

Pointing to the company’s revenue results and broad portfolio of products, he says customers were surprised by the news, but explains the separation from Belden has been going on for “almost the entirety of the year.”

Grass Valley’s core business functions, sales, manufacturing operations and R&D are already separate from Belden and Shoulders emphasised there are no plans to restructure the company.

“We will move [the business] in its entirety and should be very seamless as most of the work to carve Grass Valley out from Belden has occurred,” with only the back-end IT and HR systems remaining.

He acknowledged the Belden press release as “confusing,” as it announced a restructuring programme at the same time.

“Actually that $40 million restructuring that Belden announced was to replace the profitability Grass Valley has provided the company, the restructuring is for the rest of the Belden businesses not Grass Valley.”

“Over the course of time businesses always evolve but there is no talk of restructuring at all during this business transition.”

Shoulders, who joined Grass Valley as president in January 2018 after nine years of employment with Belden Broadcast, said Belden brought a disciplined business acumen to the company.

“Belden came into the market and combined fantastic brands and product lines to create the most comprehensive end-to-end portfolio in the broadcasting space all the way from capturing images with cameras to distribution and playout and that has given us some great material to work with.

“We have entered the next level of evolution and [Belden] also instilled a sense of discipline in the business.”

Looking back on the merger with SAM, he explained it was effective and occurred in record time.

“We completed that merge in nine months and 95% of the activities of merging the business were done, where we had one brand identity and one product portfolio, and our road maps were combined and there for our customers to see.”

Shoulders said a new owner will come with fresh opportunities. And he expects the transition to be as seamless as the SAM integration, with his priority to ensure this both for customers and staff. Albeit the reception has been received with different perspectives.

He said: “Some are optimistic of life after Belden while some feel they have been jilted or left behind and rejected somewhat.”

“One thing I am very excited about being in private equity is that it will give us a chance to retrench and focus on our investment in the short term and build the business as what we see as the future of broadcasting for the long term.”

One key area of focus is on predictable revenues and responding to customers’ requests for more flexible business models including pay as you go methods.

“Going through the transition to those types of models ultimately provides us with more stable and less lumpy revenues and but it can be painful transition particularly in the short term as you are trading these big capital purchase for smaller monthly fees.”

However, he said: “This business is not changing, we have a solid strategic plan that will align with potential investors of the business and we will continue to execute on that plan and succeed under different ownership and staff shouldn’t really notice a difference under that transition.”

Upon completion of new ownership, Shoulders expects the first few years to work hard on adding products to its portfolio and responding to what customers want as a focus and less drive on current revenue results and the later stages of ownership will see a push of revenue results and a fresh product portfolio.

He continued: “Grass Valley has been a leader in the broadcast industry for the last 60 years and I am staying with the business through this transition and I believe in our ability to lead broadcasting for the next 60 years doing great things and developing products that our customer will see at NAB and IBC next year that are going to surprise and excite them and I want to see that through.”