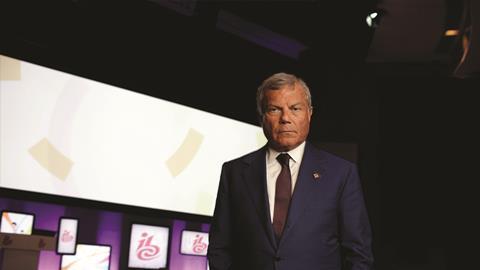 Sir Martin Sorrell: 'The boundaries between categories of media will continue to blur'

Sir Martin Sorrell, founder and CEO of creative agency WPP and a star speaker at IBC2016, believes that the much discussed ‘death’ of linear TV should be treated with “extreme caution”.

Speaking just prior to his 2016 IBC Conference Keynote Sir Martin said the latest forecast from GroupM, WPP’s media investment management arm, shows that TV is pretty resilient in the face of the digital revolution.

He also believes that the word ‘digital’, when used as a differentiator between ‘traditional’ advertising and the online categories, is fast becoming obsolete.

“Digital continues to grow, albeit at a slower rate than before,” he says.

“Digital advertising will account for almost all of net advertising growth globally in 2016, according to GroupM.But the boundaries between categories of media will continue to blur and the word ‘digital’ is likely to feel rather old-fashioned, and even obsolete. It will be a world of audience planning rather than media planning – a world in which data, technology and analytics will be even more important than they are today.” 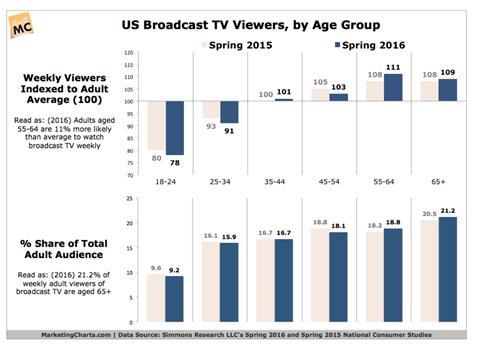 US Broadcast TV viewers by age

Sir Martin, who admitted he was shocked by the UK’s decision to quit Europe last year, says he is still concerned by the prospects of Brexit.

“Corporates are already over-cautious and risk-averse, and Brexit provides a raft of new reasons to delay or cancel investment decisions. As a result of the referendum we are placing an even greater focus on growth in Western Continental Europe, which includes four of our top ten markets: Germany, France, Italy and Spain.”

WPP now employs some 194,000 people in around 3000 offices around the world, and it owns some powerful TV-related advertising agencies including:

In June 2016 WPP was voted the world’s Most Creative Holding Company at the Cannes Lions for the sixth year running.

WPP’s medium-to longer-term focus for some time has been outside of its UK home base.

“Fast-growth markets [the BRICs and Next 11] will be the source of much of the world’s GDP growth, and therefore WPP’s own growth, in the medium-to long-term as their middle classes swell and demand for goods and services increase accordingly. This is despite the fact that growth in Brazil, Russia and China has slowed – while India remains the jewel in the BRICs crown.

“In the last year or so, mature markets like the US and UK have been the main drivers of our growth, but one of our core strategic goals is still to increase the share of revenues from fast-growth markets to between 40 and 45 per cent over the next five years. In the last year we entered two new markets – Cuba and Iran – bringing the total number of countries in which we operate to 113.”

Sir Martin stressed that WPP would not be leaving its London HQ. Nor will WPP cut British jobs, but it would likely increase the number of people WPP employed in key European markets faster than the UK. Indeed, he recognised that the recent weakness in the Pound sterling would result in a net positive impact on revenues because 90 per cent of WPP’s business was outside the UK. 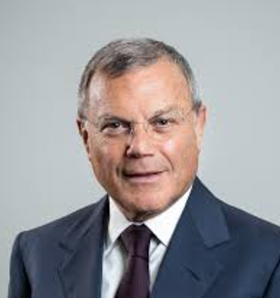 Sir Martin Sorrell is the entrepreneurial founder/CEO of WPP.  Under his leadership, the company has become the world’s largest communications services group, with nearly 190,000 people (including associates and investments) working across some 150 companies in 112 countries. He is one of the most respected global industry leaders whose views on business and the world economy are widely sought.