Ericsson-owned Red Bee Media went to some lengths to demonstrate its end-to-end managed services capabilities across the content chain during IBC2019: the company organised its own football match in London and broadcast it live to attendees at its stand in Hall 14.

The aim of the match at the Leyton Orient FC Stadium in London was to show how commentary, captioning, graphics and live feeds come together on Red Bee’s software-defined playout platform and managed OTT, illustrating how live TV experiences can be created for audiences everywhere. 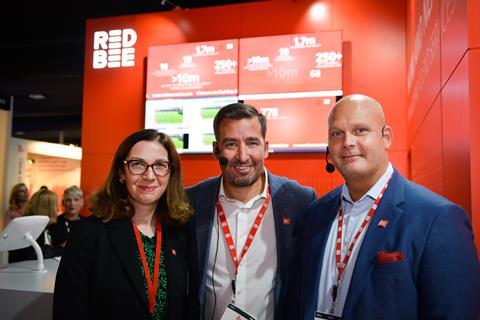 David Travis, chief product and technology officer at Red Bee Media, highlighted the fact that the content was actually processed in the Netherlands using remote production technology. He stated that remote production is an increasingly important capability as it helps reduce the environmental impact, as well as cost, of productions. The content can then be syndicated to different platforms, including social media.

Importantly, Travis said it has been possible to reduce the time it takes to configure end-to-end workflows from more than six months to half a day. That also makes the whole process more cost-effective for customers and enables them to consider niche content offers that previously would not have been possible.

For example, Red Bee Media has recently extended its contract with Channel 4 as a customer. Steve Nylund, CEO of Red Bee Media, said the broadcaster will be migrated from its current more linear broadcast operations to Red Bee’s software-defined platform. “They can become more agile,” said Nylund, with the ability to launch small, niche channels for short periods of time, for example.