The strategic partnership builds on a project that forms part of the Media-Telecom Catalyst programme organised by IBC and TM Forum. The Mobile Newsgathering Using AI for Compression project aims to develop and commercialise products for release in 2020. Also involved in the Catalyst are Al Jazeera, RTÉ, Associated Press, BBC News, and BT. 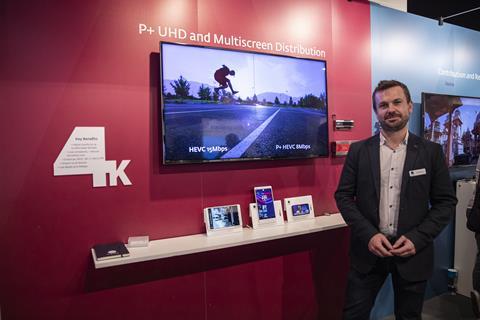 Sam Orton-Jay of V-Nova at IBC, revealing that P+ will support a new MVMO streaming service in Africa

V-Nova also announced a partnership with Simplestream to launch a new pan-African streaming service called MVMO (Movies, Video, Music, Opportunity) in December 2019. The service, developed in association with the Creative Africa Exchange (CAX), a marketplace for the creative and cultural industry, sponsored by Afreximbank [African Export–Import Bank], will combine P+ with Simplestream’s streaming platform to deliver a wide range of content to audiences throughout the continent. It will also be one of the first platforms to deploy P+, which was formerly known as Perseus Plus.

Guido Meardi, CEO of V-Nova, said: “Our P+ software library is fundamental to the feasibility of this service as it allows people to enjoy video even on 2G networks with a bitrate of only 100Kbps, but also enables high quality full HD at just 1Mbps. Integrating P+ into Simplestream’s platform will open up opportunities worldwide.”

According to Sam Orton-Jay, marketing, at V-Nova, the MVMO service will launch first in Nigeria and gradually roll out across Africa. “It’s very ambitious,” he said. “They want to support the creative industries in Africa.”

P+ is crucial for that, Orton-Jay added, because it enables video streaming even on 2G networks.