AI transforming movie production at Disney – with more to come

Artificial intelligence is already transforming the way movies are produced and will do so even more in the future, Markus Gross, Chief Scientist at The Walt Disney Studios, told the IBC Conference yesterday.

In a keynote address, Gross explained how rapid progress in machine learning and artificial intelligence is already disrupting many aspects of the traditional filmmaking process both for live action and for animation productions. 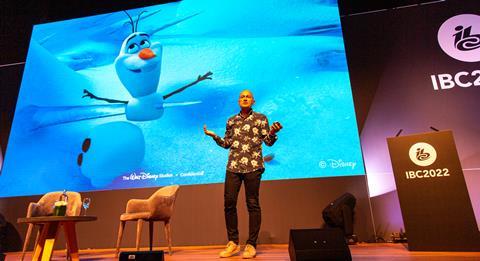 Markus Gross, Chief Scientist at The Walt Disney Studios, talked about the impact of AI on movie making.

DisneyResearch|Studios (DRS) has more than 50 researchers rethinking the film production and distribution pipeline with the help of AI to help it increase production efficiency, reduce costs and support the creativity of storytellers.

He said that Disney has spent a lot of time over the past 10 years trying to create digital humans that are undistinguishable from real ones that can project real emotional depth.

“Why is this important? Because in the end, we tell stories, and a story is the emotional journey of a protagonist through time. The face is the single most important object through which we convey emotional depth. If we want to build characters that truly bond with the audience, we have to make sure that we can project such depth.”

Motion capture and the deep learning of AI is now working together to create highly believable digital humans, he said, citing the Medusa Facial Capture system developed by DRS. It has been used on over 30 movies, including Avengers: Endgame.

DRS has also developed capture technology to create realistic looking digital human eyes, which has been used in Star Wars. It is also using AI to de-age or re-age people.

Turning to animation and virtual production, he showed how AI can help to remove the “noise” from animated images, saving significant sums of money.

Gross said that Disney wanted to use AI and deep learning to create animated characters that are “truly art directable in real time.” He spoke of the possibility of directors being able to give verbal instructions to animated characters about how to walk or which way to move.

He suggested that AI now allows for motion capture in a non-controlled environment using only iPhones. “The visual data you capture with the iPhone is enough to create a high-quality mocap scenario,” said Gross.

In the area of video processing, Disney is using AI to improve the resolution of low-res images.

“Artificial intelligence has made such great progress over the last decade, what we call deep learning. It’s truly already transforming profoundly the way you produce movies. And it will do more so in the future,” said Gross.