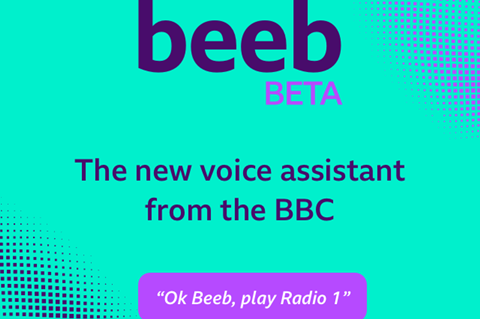 The BBC has moved to beta testing for its new voice assistant, Beeb, with a new male voice aimed at distinguishing it from rivals such as Amazon’s Alexa.

The British broadcaster announced Beeb in August of last year as software that can sit on existing smart devices such as smart speakers and TVs.

The voice assistant will focus on enabling people to select content and interact with online services, with the BBC promising it will understand British accents, acting as an alternative to Alexa and Apple’s Siri.

The BBC said it will now have a limited public release to allow for beta testing, with the technology being made available through Microsoft’s Windows Insider Programme, a community of people who regularly test out new technology.

In a blog post, BBC Design and Engineering COO Grace Boswood wrote: “We’ve built Beeb because we know there is growing demand from people to access programmes and services with their voice – around one in five adults have a smart speaker in their home, and millions more have voice-activated devices in their pockets. Much like the BBC did with iPlayer, we want to make sure everyone can benefit from this new technology, and bring people exciting new content, programmes and services in a trusted, easy-to-use way.”

The BBC opted for a northern British accent for the voice assistant, which will respond to users when they speak the words “Hey Beeb”. It comes after a UN report published last year found that Siri and Alexa are enforcing damaging gender stereotypes.

The publication, from the UN’s Educational, Scientific and Cultural Organisation, Unesco, found that the majority of voice assistants have a female voice but a limited set of responses to queries that reinforces harmful tropes about women being “subservient and tolerant of poor treatment”.

Unesco criticised the technology companies behind the voice assistants for programming them to “greet verbal abuse with catch-me-if-you-can flirtation”. It found that in some cases, female assistants even “thanked users for sexual harassment”.

The BBC is welcoming feedback from users and has programmed Beeb with jokes from a number of BBC comedy writers, as well as specific content from shows such as The Mash Report and QI.

Boswood added: “This is very much the first step with Beeb – we have a bold, ambitious vision for what we want it to look like in the future, but there’s a long way to go. Today though we’re taking an exciting first step by making the Beeb BETA available to members of the Windows Insider Programme, and we can’t wait to hear what people think of it.”