Bleat has been launched by composer, producer and mixer, Tristin Norwell, and offers theatrical and HETV Dolby Atmos mixing along with grading, online, and conform for scripted drama and high-end documentaries. 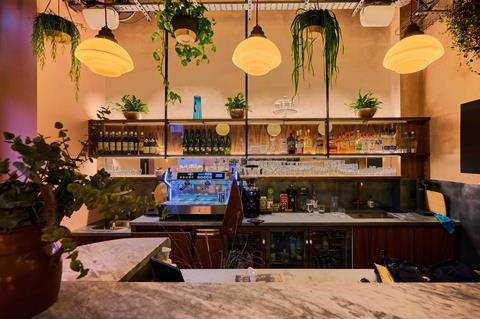 Bleat, a post production facility, has opened in Hackney

The boutique post house has two Dolby Atmos theatrical mix stages with an additional four multi-functional, hybrid suites that can be employed for grade, online and conform and/or Dolby Atmos HETV. Its theatres are complemented with 4K HDR Projection, Alcons speaker monitoring, alongside ATC speaker monitoring in each of the four the multifunctional suites.

The Hackney site is serviced by a private licensed marble bar and hot-ticket catering is looked after by neighbouring restaurant Café Cecelia.

The four-thousand-square-foot Hackney site was designed by Level Acoustic Design, with construction and technical design executed by Studio Creations.

The facility has 10gb infrastructure, and QSC’s Q-SYS, Blackmagic, and DDP workflows.

Prior to launch, Bleat credits including the final Dolby Theatrical mix for the premiere of Amazon’s grime drama Jungle. George Foulgham also mixed two feature docs in the 2022 BFI London Film Festival at Bleat, Getting it Back - the Story of Cymande and Bobi Wine: The People’s President.

Norwell said: “We began Bleat with the aim of creating a highly desirable finishing house that would lure people out of the post-Covid hamster-wheel of working from home, and back into the creative joy of sharing a face-to-face, collaborative process.”

Technical operations are led in picture by Matt Edwards (Azimuth, Coda, Fifty Fifty) and in audio by Saxon Greenep (Splice, Jigsaw24). Sales is headed up by Dan Pagan; Max Norwell is executive management assistant; and operations and ADR management are run by Tatiana Shelbourne.

The owners, Tristin Norwell and Sarah Withers, have a long history in music production, post and management. Withers began in music management with Sade and then Rough Trade Records, and Norwell as a music composer, producer, mixer, arranger, and musician, having worked with David Holmes on the music score for the Killing Eve series and Yann Demange’s critically acclaimed ’71 and with Adrian Corker for Tin Star as well as including Kenneth Williams: Fantabulosa! And Waterloo Road.