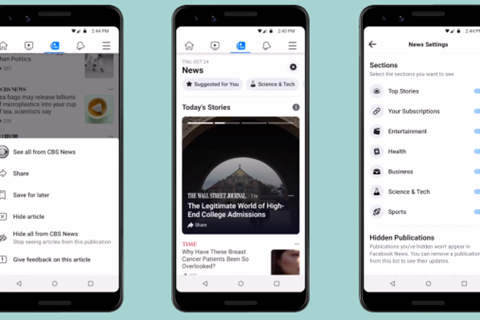 Facebook: One of the main channels for spreading false information

The coronavirus outbreak is accelerating long term trends around the rise of digital news consumption, The Reuters Institute said in its annual Digital News Report.

The pandemic has prompted a global rise in viewing of television and online news though concerns about misinformation remain high, with Facebook and WhatsApp seen as the main channels for spreading so called “fake news”.

Television news and online sources have seen significant upticks, according to the report, and more people identify television as their main source of news, providing temporary respite from a picture of steady decline for the medium.

By comparison, consumption of printed newspapers has fallen as lockdowns undermine physical distribution. Reuters said this would  “certainly accelerating the shift to an all-digital future.”

At the same time, the use of online and social media has substantially increased in most countries.

WhatsApp saw the biggest growth in general with increases of around ten percentage points in some countries, while more than half of those surveyed (51%) used some kind of open or closed online group to connect, share information, or take part in a local support network.

Reuters said that in six surveyed countries – the UK, US, Gemany, Spain, South Korea and Argentina - almost a quarter (24%) used WhatsApp to find, discuss, or share news about Covid-19. Around a fifth (18%) joined a support or discussion group with people they didn’t know on either Facebook or WhatsApp specifically to talk about Covid-19 and half (51%) took part in groups with colleagues, friends, or family. One in ten accessed closed video chats using platforms like Zoom, Houseparty, and Google Hangouts – many for the first time.

Meanwhile Instagram and Snapchat have also become popular with younger groups for accessing news about Covid-19. Almost half of the Report’s 18–24 respondents in Argentina (49%) used Instagram, 38% in Germany. One in ten (11%) accessed Covid-19 news via TikTok in the US and 9% in Argentina.

The study said that, as of April 2020, trust in the media’s coverage of Covid-19 was relatively high in all countries, at a similar level to national governments and significantly higher than for individual politicians.

Trust in the media was more than twice the level for social networks, video platforms, or messaging services when it came to information about Covid-19.

Global concerns about misinformation remain high, said the study. “Even before the coronavirus crisis hit, more than half of our global sample said they were concerned about what is true or false on the internet when it comes to news.”

Facebook is seen as the main channel for spreading false information almost everywhere but WhatsApp is seen as more responsible in parts of the Global South such as Brazil and Malaysia.

In Reuters’January poll across countries, conducted before COVID-19 lockdowns - less than four in ten (38%) said they trust most news most of the time – a fall of four percentage points from 2019. Less than half (46%) said they trust the news they use themselves. “Political polarisation linked to rising uncertainty seems to have undermined trust in public broadcasters in particular, which are losing support from political partisans from both the right and the left,” said the report.

Despite this, the survey shows that the majority (60%) still prefer news that has no particular point of view and that only a minority (28%) prefer news that shares or reinforces their views. Partisan preferences have slightly increased in the United States since Reuters last asked this question in 2013 “but even here a silent majority seems to be looking for news that at least tries to be objective,” said the study.

Elsewhere, the survey found that voice-activated smart speakers like the Amazon Echo and Google Home continue to grow rapidly. Usage for any purpose has risen from 14% to 19% in the UK, from 7% to 12% in Germany, and 9% to 13% in South Korea. Despite this, we find that usage for news remains low in all markets.