Hostile police, unpredictable crowds and the looming threat of coronavirus have made coverage of the US protests challenging to capture. Ann-Marie Corvin spoke to several news organisations about their coverage strategies.

When Deutsche Welle reporter Stefan Simons and his camera operator spotted three Minneapolis police cars encircling another news crew during the protests sparked by the death of George Floyd, they started to document what was happening, and were promptly threatened with arrest. 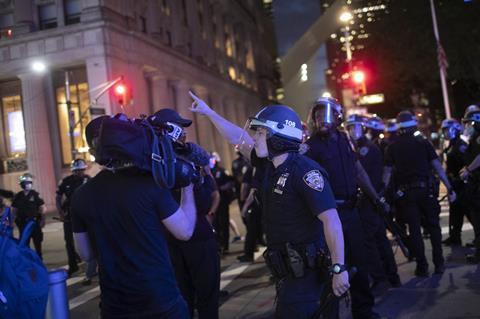 On a separate occasion, while Simons was preparing to go live on-air he confirmed that he had projectiles fired at him by the police, despite the words ‘PRESS’ clearly emblazoned on his jacket.

“It leaves all of us speechless, but this seems to be the nationwide system now that the US police don’t want the media there. They were just not prepared to have civil conversation,” says DW spokesman, Christoph Jumpelt.

While DW has been sending its reporters to cover civil unrest for decades, Jumpelt says this attack on journalists by US police is unprecedented.  “The major difference here is that it is police in a democracy that are attacking the media,” he adds.

DW has already made formal complaints about the treatment and attacks on its crew to the American Embassy, which has forwarded these on to the State Department. Jumpelt adds that DW also intends to file a complaint with the Minneapolis Police.

The DW incident was one of dozens of attacks on reporters working for world-renowned news organisations such as CNN, AP, Vice, Fox News and the BBC, which occurred during the early days of the protests.

According to the US Press Freedom Tracker, to date there have been more than 300 attacks or arrests of journalists in the US. The tracker normally tallies 100 such incidents across an entire year.

These have involved police targeting journalists with rubber bullets and projectiles, the liberal use of pepper spray and as well as arrests.

So what measures are news crews taking to safely cover these protests?

Research
For ITN head of high-risk Joel Whittaker, planning and distance is the best advice.

“The first thing we want our reporters to do is research what the demonstration is about and how that might affect their safety.

We look to recent history, territory, and culture to predict ahead and avoid dangerous situations,” he says.

Research includes looking around social media to gauge what the sentiment is at a particular location, or talking to various officials about what they are seeing and expecting. 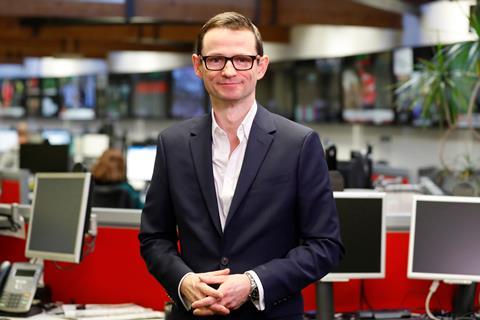 “We’re encouraging staffers to figure out their exit strategy ahead of time – figuring out what route they should take to leave an area if things turn nasty, and to aim for a place of safety. Teams working together should always have a meet up place agreed in advance, in case they get separated,’ he says.

During the protests, freelancers have also been caught in the crossfire, with photojournalist Lina Tirado now blind in her left eye after being hit by a rubber bullet.

Elisabet Cantenys, executive director of A Culture of Safety Alliance (ACOS), is currently working with freelancers, local journalists and editors to support the safety of media covering the protests in the US.

“Those who are holding a camera are usually the most exposed because they need to be closer to the action,” she says. “They can quickly lose track of what is happening outside their view, so we’re advising freelancers work in pairs so that someone is looking at the crowds and checking the dynamic while the other is filming, ” she says.

Cantenys also advises reporters to have a check-in procedure with their base and have a discussion about insurances, legal fees and expenses with editors, before the assignment.

Crowd control
Gauging how quickly the mood of a crowd can change is something else news crews need to be attuned to as the recent protests have seen the crowds turn on journalists at times.

A Fox News team covering protests in Washington DC was harassed and then chased by members of the crowd. Meanwhile in Phoenix, Arizona, a local TV reporter was grabbed live on air by a man shouting obscenities.

McCrudden adds that the coronavirus outbreak has made working in a crowd even more challenging.

“Our more experienced people know how to read the crowd dynamics and understand how police officers are likely to behave.  But with the virus, we’re asking our people to not get caught in the middle of crowds,” he says.

“The best way to avoid this is to get yourself elevated - either to a hotel room balcony or apartment. Our job is to cover the news, but we need our people to stay safe and well, and if they feel threatened – because they are too close to a big group, for instance, then we’ve asked them to use their judgement.

“We’ve advised colleagues to stay on the fringes of a crowd whenever possible but, pandemic or not, we don’t tell our journalists where they can or can’t stand,” he adds.

Keeping to the periphery of the crowd and having an emergency exit route planned is a strategy that Jean-Francois Belzil, security director at the International Women’s Media Foundation, concurs with.

Speaking recently during an IWMF webinar on covering protests safely he revealed that in some states, such as Denver, it’s been reported that protestors are marching in no clear direction or clear path.

“In this case, it’s easier to end up in a crowd. In these situations we’d always advise to try and stay at the edge and not on the inside.”

PPE
While PPE is no panacea, according to McCrudden AP is issuing personal protective equipment (PPE) to staff that more regularly cover these types of events – and it is in the process of sourcing more.

“Headgear that covers the back of the head is essential,” McCrudden adds 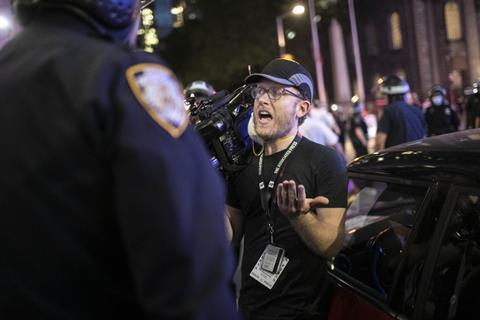 “Some of our colleagues have reported that skateboard or skiing helmets are good for that purpose, and because they don’t have a brim they are able to look through a viewfinder,” he adds.

Safety experts such as Belzil, are also advising anyone involved in a protest not to wear contact lenses “they can burn the retina in the event of a tear gas attack” while he recommends that a pair of anti-fog swim goggles can also effectively protect eyes from gas exposure.

While surgical masks help protect against coronavirus, to combat tear gas an air purifying half mask respirator with an organic vapor cartridge in combination with an N95 filter is needed, although these can be expensive.

“If you’re wearing protective gear like knee pads, then put them underneath clothes - because the more militarized you look the more of a target you can become,” she says.

Baskerville added that loose non-flammable clothing is preferable while other safety advisers are warning against wearing head-to-toe black - the uniform of choice for Antifa – an anti-fascist movement which the US police are wary of.

And, most experts agree that while there have been incidents where the police have been hostile towards the press, it’s always better to display press accreditation on your person than to hide it, to gain access in times of curfew or if police ask for credentials.

The tech
While experienced journalists and technicians are the main asset to a news crew covering protests, consideration does need to be given to the tech.

According to ITN’s chief technology officer Bevan Gibson, while lightweight cameras can be useful in situations like this, they can hard to operate at speed in fast-moving environments.

“In situations such as these, flexibility is key,” says Gibson. “You need to ensure that you have a variety of tools available, ranging from smaller, more robust devices like a GoPro, through to larger form factor cameras - especially if you need to be operating at speed while continuing to acquire content.”

Crews that contribute to live or near live broadcasts are using cellular bonding systems such as LiveU or TVU – although Gibson adds that in largely densely populated gatherings, this can present challenges.

“As the name suggests, cellular bonding systems are obviously reliant on cellular networks, so in crowds this will almost certainly have a negative impact on the performance of the systems,” he says. 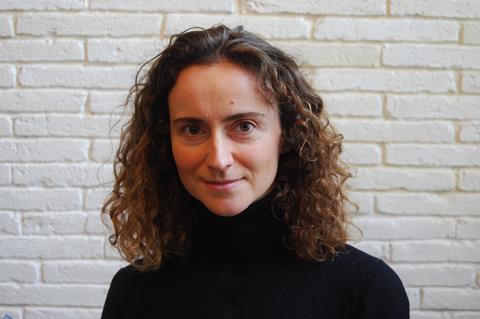 Elisabet Cantenys: Working to ensure freelancers have training on how to safely cover the protests

Larger cell bonding systems, with more on-board modems, usually perform better, Gibson explains, but have the problem of being a larger form factor.

“External antennas also will give improved levels of performance but are not always an option in unpredictable environments,” he adds.

Operating on the edges of a protest, with a lower people density usually gives better results, Gibson concludes, or, alternatively, relying on other forms of connectivity aside from cellular networks “especially if they can get Wi-Fi access to some kind of other source of IP, such as via satellite, or a fixed broadband connection.”

Good daily practice with digital devices is also important, according to Baskerville. “Journalists need to make sure they have their phone charged and take a spare battery. It’s also advisable to take apps off that suck out the battery life,” she says.

She adds that crew also need to get into the habit of regular date cleansing.

“By that I mean cleaning your phone and your memory cards and transferring the footage to a hard drive after every shoot. Get an extra hard drive if you can.

“You will build up a lot of content but you need to be careful what content you are carrying around with you – especially if it is sensitive footage of an arrest,” she adds.

Training
In the long term, to cover protests crews need trained staff who know what they’re doing and can make real-time decisions about where to go and how to operate.

ACOS has reacted quickly to the events of the last few weeks. It is offering extra support training for journalists who are out there in the field. The alliance is providing 50 bursaries for Civil Unrest and First Aid online training, which is open to freelance journalists currently covering the protests – giving them access to over four hours of online material and a live webinar.

“It’s not a substitute for physical courses – but the material will help freelancers understand crowd dynamics and inform them of what they need to look out for,” says Cantenys.

The alliance also wants to help editors and news organizations support freelancers in the field, by putting together safety protocols to support the work those journalists are doing on the ground.

According to Cantenys, the alliance will be discussing how they can offer further online resources for this type of coverage over the next couple of weeks.