IMAX’s Expanded Aspect Ratio is 1:90:1, which offers up to 26% more picture for select sequences – meaning more of the action is visible on screen. It’s also closer to the typical 16:9 ratio of TVs. 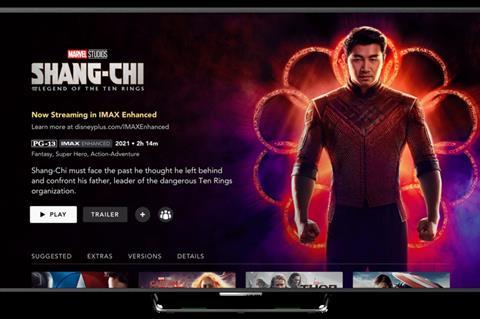 The 13 titles available at launch include the Disney+ premiere of Marvel Studios’ Shang-Chi and The Legend of The Ten Rings on 12 November as well as other MCU movies like Iron Man, Guardians of the Galaxy, Guardians of the Galaxy Vol. 2, Captain America: Civil War, Doctor Strange, Thor: Ragnarok, Black Panther, Avengers: Infinity War, Ant-Man and The Wasp, Captain Marvel, Avengers: Endgame, and Black Widow.

Disney and IMAX said they will collaborate more in the future to deliver more enhanced audio and visual technology to Disney+, including immersive IMAX signature sound by DTS, which is likely poised to compete with Dolby Atmos.

Disney+ is the first major streaming service to offer IMAX Enhanced at home, stealing a march on rivals such as Netflix and Amazon prime.

“For more than a decade, IMAX has helped filmmakers take fans across the Marvel Cinematic Universe in theatres, and now that epic journey crosses into a new world: the home,” said Rich Gelfond, CEO of IMAX.

Michael Paull, president of Disney+ and ESPN+, said: “We’re thrilled to create new value for Marvel fans and audiences on Disney+, and we’re looking forward to offering even more IMAX Enhanced functionality in the future.”