Netflix has reduced its subscription price in India by as much as 60% to allow it to compete more effectively with rival streaming operators Amazon and Disney.

Netflix has made reductions across all its four-tier plans. 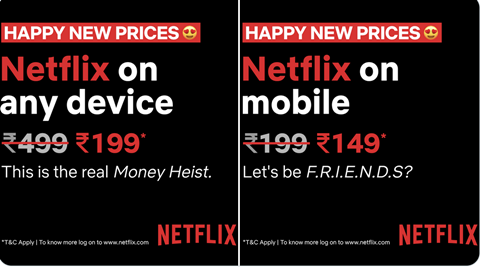 The price of its mobile-only plan is being lowered by a quarter to 149 rupees, with overall prices of various plans falling 18% to 60%.

India is a major focus for Netflix as it looks to build up its subscriber base outside the US. In 2018, Netflix said India could deliver its next 100 million subscribers.

However, the streamer has struggled in the price-conscious Indian market, where its rivals have been more competitively priced. Amazon Prime Video charges 179 rupees ($2.36) a month, and offers a cheaper annual payment plan. Disney + Hotstar has an annual premium plan with access to all its content in 4K at 1,499 rupees ($19.76).

Bloomberg reported that Netflix has won just an estimated 5 million customers in the country, compared to the 46 million who subscribe to the Disney Hotstar platform and 19 million to Amazon Prime Video, according to researcher Media Partners Asia.

Netflix has previously said 2021 will be its biggest year in India, with the release of more than 40 new titles, among them films featuring top Bollywood actors, stand-up comedy shows and original series.