John Ryley, head of Sky News, is to step down in January after 17 years leading the news organisation.

In a letter to Sky News staff, Ryley said that after almost 40 years in the news business, 28 of which have been at Sky, he has decided “to stop and leave Sky News behind.” 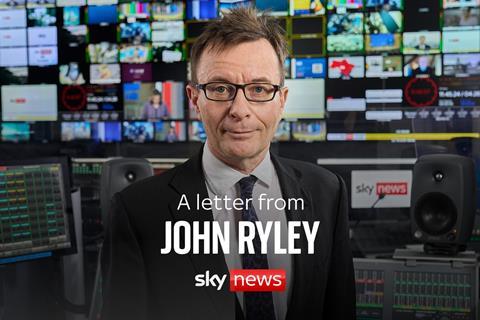 John Ryley has announced his departure from Sky News

Ryley said that it had been his great good fortune to have done the job for so long. “But I can’t pretend there haven’t been tricksy days. Leadership of a non-stop news organisation is relentless, in both an enjoyable and, on occasions, an unenviable sense. It makes extraordinary demands not just on the individual in the role, but on family and friends.”

His departure comes three years after the death of his wife, Harriet in 2019, and Ryley said that he wanted to spend more time seeing his three grown-up children. He also plans to “start projects incompatible with leading a news organisation.”

During his time, Sky News has covered events such as the 2008 Financial Crash, the Arab Spring, the rise of Isis, the European migrant crisis, four UK General Elections in nine years, two referendums, Brexit, the election of Donald Trump, the Covid pandemic, the murder of George Floyd, Russia’s invasion of Ukraine and the death of Queen Elizabeth. “The experience has been thrilling, humbling and on occasions, lonely,” said Ryley.

A successor will be appointed in the coming weeks. Ryley said: “I hope my successor believes in the value of eye-witness journalism putting our camera operators and journalists at the heart of the news and remembers Sky News - at its best - is a challenger brand, and that it’s not the cleverest or biggest news organisation that succeeds but the one most adaptable to change.

Sky Group Chief Executive, Dana Strong paid tribute to him, saying: “John is an utterly brilliant news organisation head, having always had an understanding of what’s important in a story, what people are interested in and an ability to bring the news to people in a way they can really engage with. His impact on our brand and our reputation around the world is recognised and admired by me and the rest of the leadership team. ”