The Royal Television Society (RTS) has named Jahreal Wright and Jonathan Chappell-Seetayah as joint winners of the RTS Young Technologist of the Year Award.

The Royal Television Society (RTS) has named the winners of its RTS Young Technologist of the Year Award 2022. 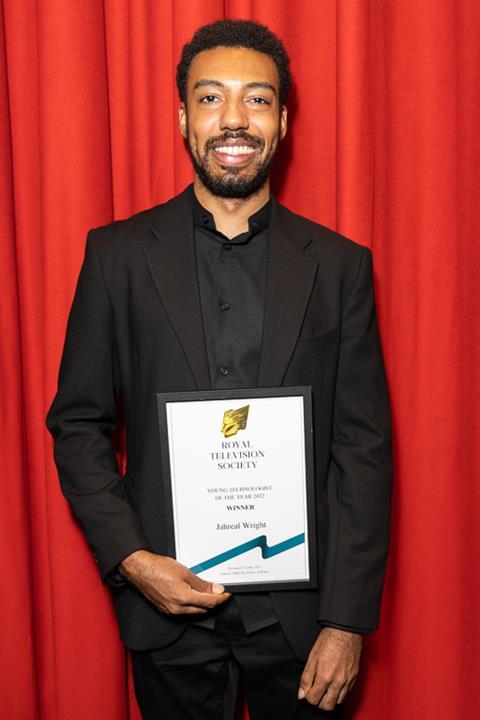 Both were chosen to receive the award by a panel of expert industry judges, which was chaired by digital media consultant Terry Marsh.

Following his completion of the MAMA Youth Project in 2017, Jahreal Wright joined Sky’s edit operations team as a trainee edit assistant and progressed into workflow supervising and managing a team of edit assistants.

This expertise led Wright to the role of technical specialist with Sky’s edit support team where he provided tech support for sports and entertainment workflows, such as F1, Premier League and the Academy Awards, and he recently became an Avid certified instructor for Media Composer. The jury praised Wright’s analytical and thoughtful approach, his excellent overview of the industry and focus on customer experience.

Jonathan Chappell-Seetayah started his career at the BBC on its broadcast engineering degree apprenticeship, leading to his first role in BBC Major Projects implementing IP technology.

Chappell-Seetayah then joined TimelineTV, facilitating BT Sport’s move to IP broadcasting through systems architecture, training tier-one engineers in IP and providing third-line support. The RTS Young Technologist of the Year jury was impressed by Chappell-Seetayah’s drive to make production better and the importance of being part of this change and turning point within the industry.

Both winners of the RTS Young Technologist of the Year Award will receive an all-expenses paid trip to IBC 2022 in addition to an invitation to the RTS London Convention 2022.

The RTS Young Technologist of the Year Award runner-up and recipient of the Coffey Award for Excellence in Technology 2022 is Andrew Ware, junior support engineer at Dock10.

Starting out at the BBC on the Broadcast Engineering apprenticeship, Ware joined Dock10 in 2017 where he focuses on studio-based installations and productions across a diverse range of shows developing skills in a range of technologies, including UHD Sony camera systems and virtual studios camera tracking systems.

Terry Marsh, said: “Every year the standard of applications we receive continues to impress us, so much so that this year we took the decision to award two talented individuals with the RTS Young Technologist of the Year Award. Both Jahreal and Jonathan demonstrated to the jury not only the dynamic experience they have garnered so far in their careers, but the drive to move the industry and technology forwards and to be an integral part of the UK production community for years to come. Congratulations to Jahreal and Jonathan, and also to Andrew for receiving the Coffey Award.”

The Young Technologist Award was established by the RTS with funds received from the family of A.M. Beresford-Cooke – a distinguished engineer who significantly contributed to the development of British broadcasting technology through his work on towers and masts for VHF and UHF transmission.

The aim of the award is to advance education in the science, practice, technology and art of television and its allied fields.

Celebrate the best in broadcasting and media with the IBC Innovation Awards and the IBC Social Impact Awards at IBC2022.