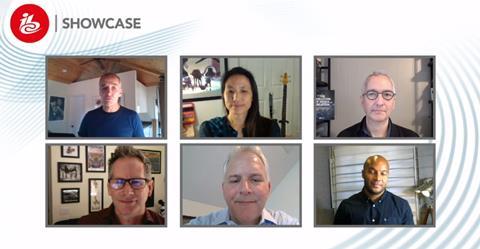 Microsoft panel featured some of the biggest Hollywood studios

During lockdown however, cloud had not been the answer, with editors taking home encrypted hard drives or remoting into Avids from their workstations at home.

While Chang said that Universal had ‘big aspirations’ to be in the cloud, she called for the industry to come together to collaborate on a unified exchange layer, which would enable SaaS-based tools to become more interoperable.

Fellow speaker Eddie Drake, head of technology at Marvel Studios, said that the Disney-owned company was being careful to couch its cloud efforts as “remote enablement” - because in the near term, he added, “it’s going to be a very mixed match with cloud and on prem.”

The CTO added that he expanded the company’s cloud-based editing capabilities – first announced at IBC2019 through a partnership with Microsoft and Avid – because Marvel’s existing remote editing set up had been slow to scale.

“In technology you never want to waste a good crisis and disruption tends to make our users and stakeholders very receptive to change,” he added.

In a test case, Drake and his team used Avid Nexis in Azure Cloud with a Teradici PCoIP client to enable cloud-based working.

“We’d put past projects in the cloud for library reuse, and so picked out Doctor Strange to use in an active editorial space. We did a test in early March and several days we started working from home.”

Marvel has since used three of its episodic series in the cloud allowing two dozen editors to work from home.

Drake predicted that remote-based working in the cloud will “have a huge impact on its archive reuse and monetization of assets”, but, echoing Chang, he added for this to happen, efforts would need to be put into “standards of interoperability, metadata ontology and security”.

Creating these standards to leverage cloud widespread cloud usage among Hollywood’s top studios is key to MovieLabs 10-year vision of the future filmmaking, the key tenants of which were outlined in a whitepaper published last year.

Movielabs CTO Jim Helman said that the organisation was now looking at a number of initiatives with its studio members so it could get to point where cloud and remote tech was usable, scalable and secure.

“ One aspect is security - with people coming in from everywhere we need to move to a zero trust model where security is designed into every component,” he said.

“We also believe our studios and partners need to develop common APIs and data models for cloud platforms so that developers of creative tools can all communicate and talk with one another,” he added

While Helman believed the industry still has “quite a way to go despite the Covid acceleration” he claimed that that the pandemic’s biggest impact has come from the change-management side.

“It’s forced the acceptance of a lot of changes in the way that people work - they might think some of the tech is not as perfect as it would be in a facility - but people have adapted. “