Warner Bros. Discovery says that Game of Thrones prequel House of the Dragon has become the most viewed title ever on its HBO streaming services in Europe, surpassing season eight of its hit series Game of Thrones.

Warner Bros. Discovery said the series debuted to the largest audience for any new original series in the history of HBO and had the best series launch on HBO Max across the U.S., Latin America, and Europe. All episodes of the series are now averaging 29 million viewers in the U.S., more than tripling their average debut night audience with strong catch-up viewing. 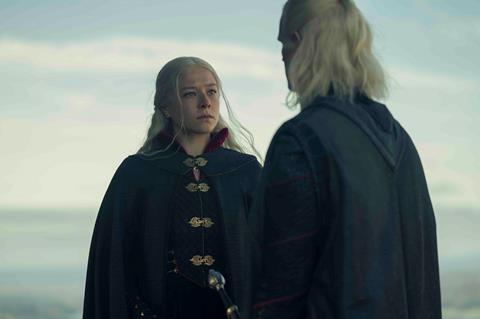 House of the Dragon has become the most viewed title ever on Warner Bros. Discovery’s HBO streaming service, in Europe

Outside of Europe, House of the Dragon also surpassed Game of Thrones season eight, making it the most viewed HBO title ever in Latin America, Southeast Asia, Hong Kong and Taiwan on an HBO streaming service.

House of the Dragon streams on HBO Max in 39 countries in Latin America, 21 countries across Europe and on HBO GO in Southeast Asia, Hong Kong and Taiwan.

Casey Bloys, chairman and CEO of HBO and HBO Max, said: “We’re so thrilled to see House of the Dragon catch fire with Game of Thrones fans around the world, as well as new viewers who are discovering the world of Westeros for the first time. Congrats to George, Ryan, Miguel and the whole House of the Dragon team on an incredible first season.”