Object-Based Audio (OBA) is the next exciting breakthrough in television production.

It will provide personalization and an enhanced listening experience as revolutionary as sound was to motion pictures.

The age of personalization has arrived and TV consumers can view any program, at any time and on virtually any media device.

The next generation of audio encoders will have the capabilities to create OBA in television production and post-production.

The beneficial features of OBA include audio personalization for language selection, dialogue enhancements and options for the hearing impaired.

OBA provides the viewer with the ability to customize their viewing for any type of program in any viewing setting.

The future audio codec technologies will enable audio production mixers, producers and broadcasters to produce customized audio for the viewer.

This process begins at the original mix location and continues through the broadcast chain to delivery on any consumer device.

These encoders will have the capability to emit surround sound and immersive sound with over 100 channels with objects either separately or in combination with each other.

Scene based audio will also be a feature of the next generation codecs enabling the mixer to represent the sound image instead of channels.

This paper will describe the evolution from current channel based TV production to the next generation of multi-featured audio encoders with OBA and the potential benefits they will offer to all types of TV viewers.

Since the beginning of TV production, channel based audio mixing has been the norm.

Based on the creative vision of the director, the first audio mixers configured their mixing boards for microphones placed at critical locations within the stage or attached to the actors to capture their voices.

For a musical show various microphones were placed amongst the musicians and singers.

Drama, variety and comedy shows would have a boom microphone, stage microphone or lavaliere microphone to pick up the talents voice. 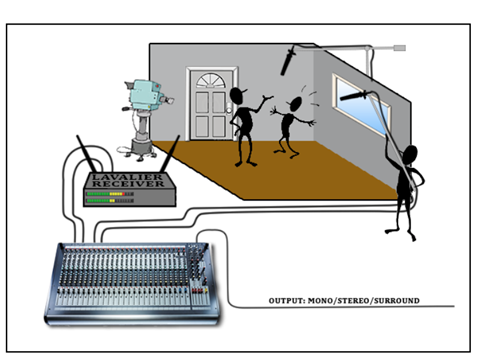 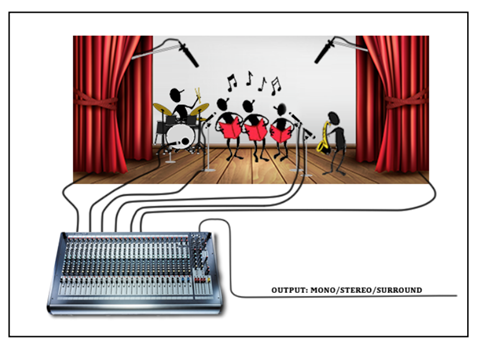 As sporting events were included in TV broadcasts, a new challenge arose. The events action occurs on a field or court and is not precisely choreographed as with a drama type show.

The solution for this setting was to have microphone placements established by a general game template, with announcers at different locations and additional sound sources from multiple locations as illustrated in Figure 3. 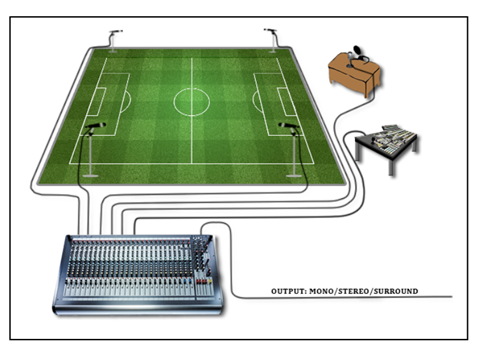 Once the microphone routes are established, all of the different microphone tracks are mixed together and coupled into a final mix.

The final channel mix will be mono, stereo or surround sound.

The master channel mix prohibits the independence of the singular microphone tracks for broadcast distribution.

The individual tracks cannot be uncoupled from this final mix and personalization is unavailable.

All TV genres captured through channel based mixing create a remarkable life-like representation of the directors’ vision.

However, the viewer’s only personalization/interaction is to control the loudness and the dynamic ranges available at the viewing location with the volume/loudness control.

In a live TV broadcast, the viewer hears the event as the sound mixer is creating the show.

In a non-live TV show, the original mix is generally sent to a post-production facility for audio sweetening.

These sweetened shows are generally drama, documentary and variety shows where immediate broadcast is not demanded.

The sweetening process may involve the addition of objects along with its process for enhancing the original mix.

The next generation of audio encoders will allow the addition of personalization tools with OBA that will enhance the viewer’s experience past channel-based limitations.