The OTT (over-the-top) model is experiencing rapid growth as a complementary video distribution channel. Operators and programmers are facing the challenge of providing the same quality of experience for both traditional and OTT viewers, and doing this at a scale.

Users are accustomed to robustness and quality of traditional video delivery ecosystems such as cable, IPTV, satellite and broadcast. A successful OTT deployment should be able to match, if not exceed, these.

In this paper we are providing an overview DASH implementation of robust ad-supported live linear services and an OTT-centric transcoder/packager architecture to support it.

We discuss DASH features that make such service a reality, as well as a range of issues unique to such deployments – from content conversion to timing to scalability and fault tolerance, as well as additional benefits coming from tighter integration between intermediate transcoder-packager format and DASH.

Lastly this paper will discuss monitoring and verification of the end-to-end linear content delivery chain.

An ever-growing share of US consumers uses OTT for viewing live content, such as sports events, while the vast majority is still served using traditional distribution methods, such as cable, satellite, IPTV and terrestrial broadcast. As an example, ESPN reported 17m traditional and 1.8m OTT viewers for the FIFA 2014 finals.

This is a good illustration of the reality faced by US programmers and operators: majority of viewers are still using the traditional decade-old content distribution mechanisms, while a rapidly growing OTT segment is served by adaptive streaming over HTTP.

Passing the tuning test – providing OTT customers with quality of experience (QoE) that is same or better than the traditional one is, thus, of paramount importance to the operators. This paper concentrates on a single use case: ad-supported linear channel.

Many of the issues that are irrelevant for on demand systems – such as “live edge” determination, end-to-end delays, schedule changes, coping with large audiences, etc., have a significant impact on viewers’ QoE. It goes without saying that resilience and scalability are the basic requirement for any OTT deployment that offers premium linear content

Our idealized system, depicted in Figure 1 can be summarized as follows: an MPEG-2 TS feed containing audio, video and SCTE 35 signalling is received and decrypted at the headend. It is then transcoded into multiple representations, some intended for OTT use and some – for traditional. The result is then packaged and encrypted for the intended crop of devices and mode of distribution, with OTT service provided using MPEG DASH. 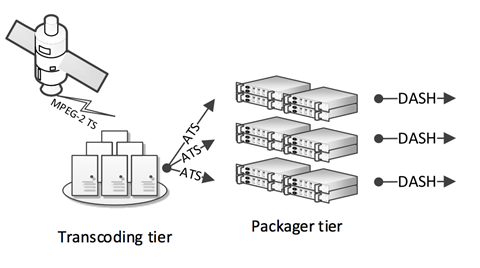 We will assume that the reader is familiar with the basics of MPEG DASH and transport streams (MPEG-2 TS). Introductions to DASH are available in multiple papers, such as [1], [2], and [3], while [5] provides an in-depth introduction to MPEG-2 TS.

The simplest approach to generate DASH content from a real-time MPEG-2 TS feed can be summarized as (1) transcoding the source feed into the appropriate set of profiles, (2) delivering the segments to the origin server, and (3) letting CDNs take care of the distribution to the client.

This solution undoubtedly works, but does not necessarily possess robustness and scalability properties expected from traditional systems.

The transcoding step can be conceptually decomposed into demultiplexing, pre-filtering, proper transcoding of elementary streams and packaging the resulting bitstreams into DASH segments for OTT distribution or MPEG-2 transport streams suitable for traditional distribution.

Computational complexity of packaging is orders of magnitude smaller than the transcoding.

In a large, geographically distributed network, where multiple edge nodes on a closed provisioned network interface either with the clients directly or egress into CDNs, keeping transcoding and packaging together is computationally and economically inefficient.

Physical separation between packager and transcoder, enables centralized transcoding processing. The horizontal scaling characteristics of such a multi-tier system with growth of audience are also significantly better than these of a traditional all-in-one transcoder.

This tier separation is not entirely free – it is achieved at the expense of having to simulcast all encoded representations of the content rather than just deliver the source to each transcoder.