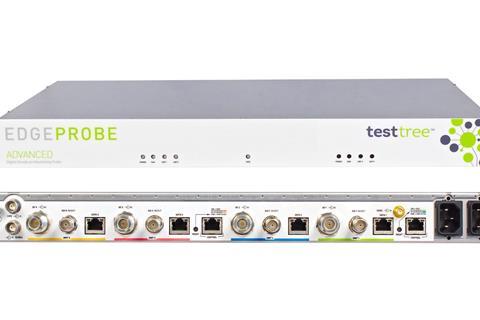 The first phase, with coverage of the Mega-Manila area, is now on-air; the second phase will provide services in major cities throughout the Philippines and will be completed this year.

The system was supplied through ProAce, the Philippines systems integrator and reseller of Enensys, after extensive testing by the TV5 and Cignal teams.

OneBeam enables ISDB-T transmitters to be fed using DVB-standard distribution over satellite or IP networks. Adaption from DVB to ISDB-T is performed at transmitter sites with the Enensys TxEdge-ISDB. The ISDB-T configuration and SFN timing are controlled with Enensys SmartGate-ISDB units at the head-end.

The system is fully redundant and Enensys ASIIPGuard and IPGuard seamless switches are used for main/backup switching. The satellite distribution is encrypted so the system also incorporates Enensys TSDescrambler with ProCam modules to decrypt the satellite feed for free-to-air terrestrial broadcast.

Benet Galang, head of network engineering at Cignal, said: “We are pleased to find this OneBeam solution by Enensys that has enabled us to adapt our DVB satellite distribution to an ISDB-T transport to our DTT transmitters efficiently. We also have been looking for an integrated monitoring solution that will help us in the maintenance and operation of all our broadcast transmissions and we are glad to find the EdgeProbe solution meets this requirement.”

Colin Prior, Enensys VP sales for APAC, said: “We are delighted that TV5 has selected the Enensys ISDB-T solution for its DTT network. We have worked closely with TV5 throughout their evaluation of our solution. We were able to provide a complete solution meeting all of TV5’s requirements, including SFN operation and monitoring.”

George Chan, CEO of ProAce, said: “We are honoured that TV5 Philippines has decided to deploy the Enensys OneBeam ISDBT solution for its DTT rollout project. As the local partner of Enensys in the Philippines, it has been a challenging yet fulfilling journey for me and my team knowing that we were able to cope with TV5’s expectations. We look forward to helping TV5 in the expansion of their DTT network.”