Looking back at 30 years of Sky News 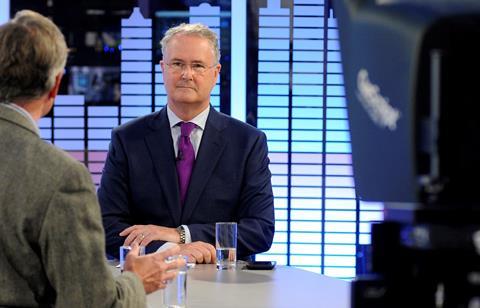 In the 1987 movie, Broadcast News, William Hurt, playing a handsome rookie news anchor looks on with amazement as producer Holly Hunter harries and cajoles a long-suffering VT editor to finish cutting a package for the network bulletin.

No sooner has the final shot been laid and the tape (we are talking cassettes, probably Beta SP here) has been ejected, her junior colleague embarks on a mad dash through the newsroom building, narrowly avoiding or colliding with any number of hazards as she heads to the control room. Breathless, she climbs the last stair and hands the tape over to an unseen operator, and the item plays out, right on cue.

There is a whole heap of movie-making licence being taken here. Believe me, I know from experience, those Betacam players took ages to load a cassette, spin up the heads and start to play – but more of that in a moment!

In the early days of Sky News, the route from edit booth to playout area was shorter and, for the most part, a straight line.

Having been set up by an Australian boss, John O’Loan, there was a preponderance of fellow Aussies around the newsroom. The in-extremis routine was to continue refining the edit of the lead story until you could hear the top of the hour music start to play; then eject the cassette from the edit machine and throw it at some speed down the 22 yards or so of corridor, where the VT operator had to possess both a zen-like calm and the prowess of an accomplished slip fielder, to deftly collect the tape in soft hands before guiding it into the next available playout machine.

As a young anchor, who had come from radio, and started out in TV when five and eight second pre-rolls were commonplace, this all added to gaiety of life.

“Fill a bit, the tape is coming…” was a common instruction in my earpiece. So, we frequently had to extemporise some further words to add to the carefully constructed introduction, without giving the game away that we were really just padding for time. The kids who read the news these days with instant server playout don’t know they are born!

The young Sky News broke some established rules and conventions.

I recall a lively discussion between a studio director and a notorious but brilliant executive producer about putting some new video to air. “We couldn’t take it any earlier… ” the director protested, “… it was still spooling back [to the beginning].” Quick as a flash came the repost: “You should take it anyway, I love spooling on air…!”

I wasn’t there right at the start. I joined the newsroom at one of its early stress points: Gulf War 1 in early 1991. The fledgling UK based news service was fighting hard to be heard and to recognised amid the chaos of war – where international TV news was dominated by CNN, which was enjoying a 10-year headstart in producing rolling news. The staff at the Osterley newsroom were pulling 14-hour shifts day after day; the reporters and camera-crews at home and abroad were working non-stop for days at a time.

It was the teams on the road that defined the fledgling Sky News; they got to the story fast, rigged cameras and satellite dishes quicker, stayed on air longer than anyone else. And it got the channel noticed.

As a studio anchor, I’m a lightweight in traveller’s tales of daring do and reporting around the world (see Jeremy Thompson’s excellent book “Breaking News” for that) but I was occasionally despatched to big stories and major events – and enjoyed working with the remarkable pool of talent in engineering and camera teams.

The earthquake that begat the Boxing Day Tsunamis happened just before 1am on the 26th December 2004, with carnage and multiple fatalities around the shores of many countries surrounding the Indian Ocean. On Boxing afternoon, three teams of correspondents, presenters, crew and producers were dispatched to Banda Aceh, Indonesia; Phuket, Thailand - and for me, Gaul in Sri Lanka.

Hair-raising moments
We flew for hours, arrived in Columbo at God-knows-what-o’clock, jumped in the only minivan for hire, and drove through the night to Galle. Once there, after what seemed like only a matter of minutes, a 1.5m satellite dish had been assembled, fired up and tested, ready to beam pictures back to London. It continued to work seamlessly, save for a brief time off the air, when a colleague plugged a hairdryer into a ‘spare’ socket on the generator and, unsurprisingly, it blew a fuse! 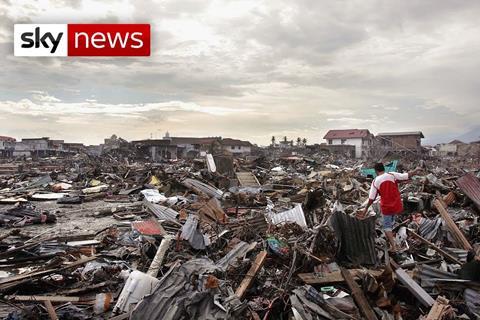 Notwithstanding such mishaps, the can-do attitude of the broadcast engineers was (and still is) matched back at base.

With three different presenters in three different countries, with different time delays in the video signal getting pictures to London, it was a tour de force in studio directing to cue one presenter eight seconds before they need to appear; a second anchor, five seconds early and a third three seconds prematurely. And all in a live headline sequence, without autocue, hour after hour after hour.

That enterprising spirit of “giving it a go” has echoed down the three decades to this 30th birthday.

In 2005, Sky bosses supported the channel in funding its move to a bigger newsroom-come-studio building and a switch to widescreen format, not least so viewers could appreciate the biggest and widest video wall in TV news (at the time).

Half way to 30: Martin Stanford presented Sky News Today in 2005

A few years later, and there was an upgrade to HD – the first news channel to do so. Cameras and live gear, satellite trucks and recording servers all needed to be upgraded while keeping the existing SD service going. With typical bravado, the launch of the new high definition look was not tucked away at 3am on a Sunday morning, but instead the switch was made as we went to air with the 2010 General Election results programme – complete with dozens of outside contributions, video wall graphics and maps and everyone pulling another all night and all-day shift!

Sky pioneered the big screen (and occasionally virtual sets in green screen studios) as a storytelling device for the big occasion, over time ceding more control to myself as presenter. For the 2008 US election, I could ad-lib an entire sequence, animating results or poll findings without the confines of a script and graphics operator, thanks to a burgeoning IT team and a bespoke interface for my iPad.

Sometimes we got a little ahead of ourselves: the evening news show I hosted that was designed to include live viewer contributions by webcam, struggled in the days before mobile phones made Skype and Facetime calls commonplace.

But a subsequent format, capturing the most popular news and curiosities online entitled “skynews.com” was more successful and won recognition from the Royal Television Society as the “Innovation of the Year”.