We live in interesting times. Without doubt, the broadcast and electronic media industries are becoming more IT-centric and the influence of internet protocol (IP)-based workflows is increasing. These technologies are enabling the distribution of high quality content over a myriad of smart devices at quality levels that would have been unimaginable just a few years ago. 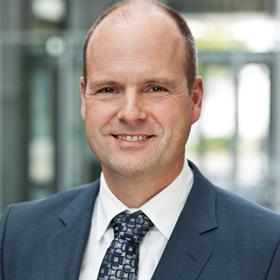 However, there is still a critical need to distribute the same content to a large audience and in this scenario, satellite and terrestrial transmission architectures continue to play mission critical roles. As we witnessed at this summer’s FIFA World Cup finals in Russia, a single event (or match) can attract worldwide audiences that are measured in billions.

For the foreseeable future, satellite and terrestrial transmission systems are an absolute requirement of any broadcaster’s technology infrastructure. These are markets where Rohde & Schwarz has a long and very successful history. Yes, we are focussing on new IP-based production strategies but at the same time we will never lose our focus on pushing the boundaries of terrestrial and satellite communication. As consumer tastes evolve around HD and UHD standards, terrestrial and satellite broadcasters face the challenge of carrying far greater amounts of data across their networks.

Satellite uplink amplifiers
With our rich heritage in broadcast, we are continually seeking for new opportunities where we can leverage on our experience in designing and manufacturing high power transmission equipment for demanding 24/7 applications and new satellite-based markets to establish. One critical area of satellite technology is the amplifiers which are used within ground-based equipment to uplink signals to satellites.

At Rohde & Schwarz, we have a proven track record stretching over more than six decades in the field of high power RF amplifier design. Our products were initially designed for terrestrial transmission applications but the portfolio has been successfully widened to include a diversity of applications including communications, scientific, EMC and design and product validation.

The reason for our entry into the satellite uplink amplifier market today is the opportunity we have to apply significant advances in solid-state transistor technology, which could impact the entire market.

Traditionally, high-power ku-band satellite uplink amplifiers are tube-based devices. The tube-based product is proven technology which is relatively compact and lightweight and offers good operating efficiency. However, there are some long-standing issues with tube-based amplifiers which can make their operation problematic. After first powering up the tube takes a period of time to warm up, thereby delaying system operation, plus when the tubes are subject to failure then the entire system stops operating. An alternative is solid-state amplifiers, however they have only been available in low-power categories so far and just recently, high power solid state amps have become available but are still relatively large and heavy.

An approach based on focused research & development
Whenever you enter a new market, there is a need to size up the competition. At the recent NAB and Satellite tradeshows I was able to look at some rival products and, quite frankly I was surprised. Several companies appear to have taken different building blocks which they have patched together in a box and called it a new product. 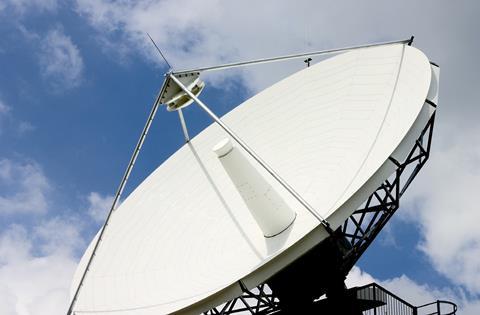 This is not the Rohde & Schwarz approach. In contrast, our specialist design engineers have worked long and hard on a product which represents a quantum progression in satellite amplifier technology. We don’t believe in trial and error: instead we have developed a new, radically different and highly integrated approach through thorough design and simulation. Only when our new products are proven to work do we progress towards introduction and manufacture.

Our goal was to substitute traditional tube technology with the latest advances in solid state transistors. Working at high frequency, the big challenge is to design a clever heat sink concept to keep the transistors cool which increases their lifetime and performance and to come up with a compact topology for the RF components with as little as possible attenuation caused by the insertion losses of power splitters, combiners, connectors and cables. Also, we sought to develop a product that is easy to integrate within existing satellite systems, is compact, lightweight and efficient in its use of power. After a great deal of in-house R&D, we have succeeded in every respect.

Using the latest transistor technology, we have introduced a new family of solid-state amplifiers which combine the best of both worlds and offer users new and radically different functionality. Importantly, if transistors fail during operation, the amplifier continues to operate with reduced output power. With no high voltages used within the product it is easy to maintain and it offers a significantly longer operating lifetime than its tube-based counterpart. Moreover, it is possible to equip the R&S amplifiers with redundant power supplies, both for AC and DC operation, so that a power supply failure does not stop the operation of the amplifier.

We have developed two power classes for our uplink amplifiers: 400W and a 750W models will be available as outdoor and indoor units and for the two frequency bands 12,75 GHz to 13,25 GHz and 13,75 GHz to 14,5 GHz. The amplifier can be used in large scale fixed satellite installations serving customer applications such as broadcasters, telecom & internet service providers, financial institutions, government and non-government organisations. At the same time, the smaller amplifier can also be used for mobile, vehicle-mounted satellite applications.

Conclusion: A new approach for today’s drive towards UHD and beyond
A key aspect is the selection of the modulation scheme for transmission. Today, the de-facto standard is DVB-S2, and the trend towards ever higher data rates, required for the transmission of 4K/UHD video for example, compels the use of higher order modulation formats in the future which are already defined in the DVB-S2X standard.

With its built-in signal linearization, the new R&S satellite amplifiers provide much better amplifier performance and offer potential for higher order modulation formats such as 64 APSK or even 256 APSK. It enables the user to extract the most from the available resource in a gallium nitride transistor. 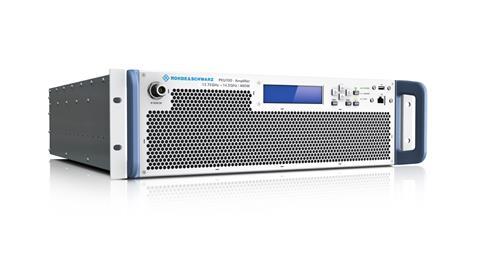 As a consequence, satellite operators will need a significantly less powerful amplifier to transport more data across the same satellite. At a time when energy saving and increased efficiency are key drivers in the satellite communications market this is important news.

Our amplifiers are easy to transport and come in a compact enclosure: an issue which will drive a change in technology replacing tube-based amplifiers with an innovative design of solid state solution.

In many respects the R&S PKU100 family represents a quantum shift in satellite uplink amplifier technology – the world’s first solid-state amplifier with automatic adaptive signal linearisation offers the best of all worlds.

In the current economic environment where organisations are constantly striving to do more with less resources, the introduction of the R&S PKU100 will be a high-water mark in the international satellite market. We first introduced the products at NAB this year and at IBC, we completed the family with amplifier products designed for outdoor installation.