5G offers great potential for media distribution of media content, with millions of smartphones and tablets as potential TV receivers for live and catch up services. That’s the view of the 5G Today group, which is conducting broadcast trials in Bavaria.

The three-year timeline for the Bavarian project 5G Today, which started in July 2017 and was originally slated to end in October 2019, may now conclude next year, after results, analysis and utilisation planning.

This project, which is funded by the Bayerische Forschungsstiftung (Bavarian Research Foundation), was built around FeMBMS, Release 14 of 3GPPP standardisation that brings economy and the ability to broadcast content on 5G networks.

To get the story of 5G Today, IBC365 spoke with Thomas Schierbaum of IRT, Thomas Janner of Rohde & Schwarz, Helwin Lesch of Bayerischer Rundfunk and Uwe Loewenstein of Telefonica.

“The IRT (Institut fur Rundfunktechnik) is in charge of project management, and we are also developing a receiver. We also made some propagation measurements,” said head of PR Schierbaum.

“This is really a major milestone; we are re-writing broadcast history.

“The main point of the standard is that we have large inter-area distances of up to 60 kilometres. We have a downlink only system, so you don’t have to deploy a back channel or an uplink,” he added.

“We are able to run the standard without a SIM card and we are getting 100% of the transmission capacity for broadcast.

This is a key difference to eMBMS from LTE, where only 80% could be used for the broadcast mode.

“We only use the signal layer to transport it. Simply what we are doing is transporting one TV stream, into 50% of the Southern Bavaria area,” said Schierbaum. “The high tower transmitter sits at 1,800 metres, on top of Mount Wendelstein. And then, in addition, to cover Munich, we have the north of Munich transmitter. 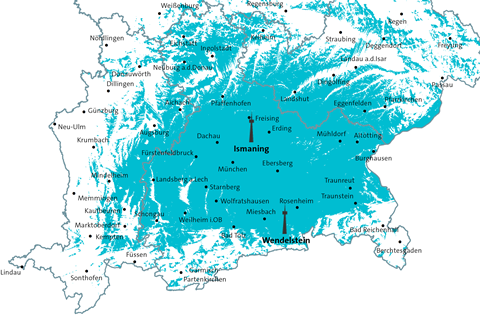 The two towers cover about 60km.

“What we are doing now is measurements – driving with a measurements car. We also have a children’s buggy carrying equipment because you must measure at the speed people are walking when using their cell phone,” said Schierbaum. “The polarisation of the antenna is also important because you see the cell phone in portrait or landscape mode. Kathrein has tested several antenna prototypes here on the transmitter, and there are precise roles for all the partners.”

Rohde & Schwarz brought the first-ever FeMBMS transmitter to the party.

“Telefonica gave us the frequency because in Europe we had Digital Dividend 1 and 2 and the broadcasters lost some spectrum to the mobile operators. So we are running a single frequency network over channel 56/57 (750-760 MHz), and that spectrum belongs to Telefonica,” said Schierbaum. “Bayerischer Rundfunk provided the transmission sites and the content.”

5G Today was on-air prior to IBC.

“Add the 5K-Broadcast service in China and this is a strong signal to the end-user side and to chipset manufacturers. This is the next step necessary because the infrastructure and the solution is there,” said Schierbaum. “The next step is to have a solution for the handset side, and we are not looking only at mobile phones. We are looking at smart cars and multimedia systems too.”

Working with the mobile industry
Bayerischer Rundfunk’s head of programme distribution Lesch said: “The more successful our program, the higher our distribution costs will be. So it is very important for us to have that high power high tower transmitter infrastructure, to reach consumers across that wide area – to make sure that they can receive public broadcasting content in Bavaria, and where they want it.

“One of the main factors is having Telefonica as a partner. It is not against the mobile network industry, because we are working together to make sure the consumer has a good experience.

“I think 5G-Broadcast really has the potential of getting a worldwide standard for terrestrial broadcasting. In 2015 Munich was set up on an LTE based infrastructure!”

In 2019 Bayerischer Rundfunk has started three new research activities, more or less dealing with multi-content delivery networks and 5G solutions. In early September it did a remote production in 5G.

“All these projects are covering technical issues, and I am sure an engineer is able to solve every technical problem, but three things are challenging – chipsets, the business model, and frequencies. 5G-MAG is a good initiative for solving all of this,” said Lesch.

The 5G Media Action Group (5G-MAG), which launched earlier this year at IBC2019 by the EBU’s director of technology and innovation Antonio Arcidiacono emerged from the momentum of the European project 5G-XCast, with a focus on building of an operational framework for the harmonious and market-driven implementation of 5G solutions in the areas of production and distribution.

“There is worldwide attention to 5G-Broadcast. We are part of several trials in Europe, China, Brazil and around the world, and for sure a few more trials will be announced in the next three months,” Thomas Janner, Rohde & Schwarz

Asked how R&S got involved in the 5G Today project, he said: “We were a project partner from the beginning and we were co-writer of the research proposal. The very first discussions about the research were in autumn 2016. Actually it was not necessary to develop a new transmission system as the actual transmitter family Tx9 was and is well prepared for transmitting 5G broadcasts.

“We only had the need to develop the signal processing for the new standard and the protocols and interfaces to the EPC (evolved packet core). At this time we were giving a lot of thoughts about the convergence of mobile and broadcast networks and so the research project fits perfectly to our strategy,” he added. “FeMBMS release 14 is where the complete radio frame and the complete channel can be used for broadcasting. When we talk about 5G-Broadcast we talk about FeMBMS, and that is what we implemented into our transmitter.”

What about the physical layer of FeMBMS and possible drawbacks compared to DVB-T2 or ATSC3.0? 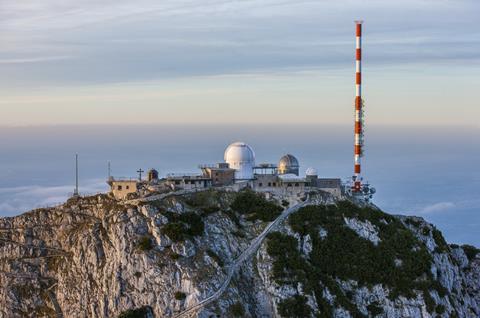 “This might be the case but could be optimised in further 3GPP releases,” said Janner. “There is worldwide attention to 5G-Broadcast. We are part of several trials in Europe, China, Brazil and around the world, and for pretty sure a few more trials will be announced in the next three months.”

Loewenstein is manager of spectrum technology, regulatory affairs with Telefonica O2 Europe. Asked what his company wanted to get from the research, he said: “The reason we joined this project as a mobile network operator was to get an understanding of the technical possibilities and options of the new ‘5G-Broadcast’, in particular, the usual ‘high-tower-high-power’ constellation of the broadcasters. Our 5G Today project is the first of a kind in the world.”

As a digital champion in Europe, Telefonica wanted to contribute.

“The project was scheduled until the end of October, but we’re currently investigating options to continue the trial further,” said Loewenstein. “TEF would try to continue to accommodate the spectrum availability as long as possible throughout the year 2020.”

“The successful use of the 5G-Broadcast capabilities will depend on cooperation between various stakeholders,” Uwe Loewenstein, Telefonica

The use of FeMBMS is an advance but does this point to future, wider technology and business co-operation between broadcasters and the telecoms and mobile sectors?

“5G (aka IMT-2020) as a new technology comprises plenty of options and technical capabilities to enable the so-called verticals to benefit from it and for the first time to mature various business models,” said Loewenstein.

“Like all verticals, the successful use of the 5G-Broadcast capabilities will depend on cooperation between various stakeholders.”

The verticals he had in mind include digital farming, e-health and the automotive industry. 3GPPP is creeping into everyday discussions around the broadcast space.

“For Release 16, we will see the broadcasters trying to further develop this standard. TEF will help and support according to the implementation of the new capabilities, if appropriate,” said Loewenstein. “We provide the spectrum for trial purposes only and not for commercial services. No one knows whether there will be any kind of Digital Dividend 3 at all, but instead of accessing spectrum exclusively, 5G-Broadcast might provide options to access the spectrum below 700 MHz in a common, shared approach.”