Dutch football club Ajax has showcased an artificial intelligence supported production of one of its matches, which the club’s technology partners say could remove the need for production facilities, camera crews and directors.

The technology collaboration was demonstrated last week at the Ajax Training Academy during a training game between AFC Ajax and FC Bayern Munich youth teams. The game was also live streamed to Ajax TV’s Facebook channel with an automated video director based on AI algorithms. 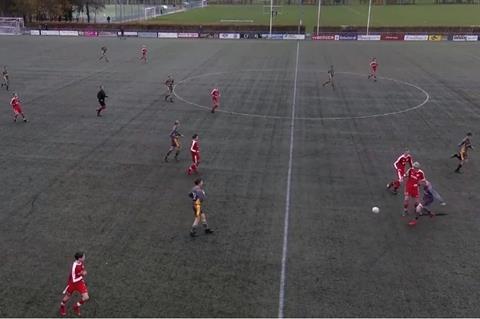 Showcase: AI tech collaboration was demonstrated during a match between the Ajax and Bayern Munich youth teams

Ajax Innovation Team Technology Consultant Max Reckers said the key principal driving this innovation is the fan engagement and its ability to help train players in a similar way to RFID-based tracking.

Reckers said: “We are focussing on bringing new and existing technology direct for a better customer journey as well as trying to bring those together in a sensible way to the market…our aim is to create better algorithms to understand where the opponent and ball is at all times and the possible passing options. We are not calculating passing A to B but who has the ball and what are his options.”

Reckers explained once the player can see the options from this perspective it helps educate on their status within the game and what they can do to enhance the play and support the team. Ajax’s vision is to bring this level of technology to coaches in real time with only one to seconds of delay, Reckers explained.

Ajax worked with Hikvision, TNO and Mobile Viewpoint on the project. Mobile Viewpoint’s IQ Sports Producer, an AI-driven production suite that supports the capture and delivery of live sports streaming, was used for the technology collaboration.

It includes a fixed-position 24MP 180-degree camera that can cover an entire field of play, a dedicated appliance with Mobile Viewpoint’s AI engine and IQ Sport Producer Software and a connection to the LinkMatrix management dashboard. It has also been paired with Hikvision’s camera with Mobile Viewpoint’s AI engine selecting which of the camera’s four 6MP lenses to use given the position of play during a match or game. This allows for the capture of live games by tracking players and the ball and then live streaming the resulting content, which essentially removes the need for production facilities, camera crews or directors, says Mobile Viewpoint.

Mobile Viewpoints Managing Director Michel Bais said: “There is a technology revolution going on around us…sports viewing is moving online, we looked at how we can automatically enhance sports content for broadcasting channels – basketball and football are championing this.”

“We are at the point where the technology is getting really interesting now and how it can help [broadcasters] and fans. We are about four to five months until the system will be ready for wider commercial use.”

Ajax also worked with technology firm TNO on the development of its strategy. Head of Sport and Media Technology Paul Valk said the lack of a business case makes adoption tricky but added that the live demonstration with Ajax showed the ecosystem is transforming.

“We have to move faster to combine different sensors of data for the media industry. Hybrid sensors and behaviour detection will help coaches and audiences.”

He added: “We are focusing now on real time player for mass market, steering our research team and everything we want to develop at tier one needs to also do so for tier two and tier three sports.”