LiveLike Co-Founder and Chief Business Officer Miheer Walavalkar explained the buzz around sport content, gaming and even the race to 5G all has the same theme in common: consumers want the best quality content delivered in real time.

LiveLike is a start-up that powers VR live sports streaming experiences for broadcasters, currently licensed with Fox Sports and the French Tennis Federation.

And Walavalkar said the social VR experience is fundamental for fans to connect and share the sporting experiences in real time. 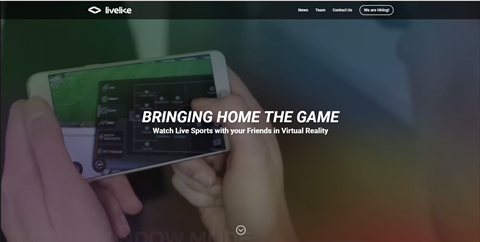 “Our focus is creating a virtual stadium of the future for fans who are willing to pay to be part of the experience. There are more people watching more content on smarter streams than ever before but how do you monetise that user?”

Walavalkar noted the challenges to create a new business model for the small screen based on the big screen model.

He said: “The linear model was fixed, but today consumption can occur anywhere and anytime, that is where technology such as VR, AR and 5G will play a big role to help monetise content.”

He said: “It is challenging to know how VR and AR are going to play out, the best use of AR is not yet known but we believe it will open up the ecosystem like the app store did for developers.

Walavalkar stated it is a “Pandora’s box” of opportunity, explaining there is a lot at play from considerations of the user experience and delivering different opportunities for fans. LiveLike’s challenge is to engage and channel content to its users who are engaged at different points in the game as well as connecting with others fans.

Vice Media Chief Commercial Officer Luke Barnes explained there are still barriers for alternative platforms to overcome and that the demand is driven from the need to “converge and diverge around live or on-demand content.”

He said: “Vice’s approach has always been to fit the demand and behaviour of our audience…the mission of Vice is to give young people a voice and tell stories in the ways that are not being told by the mainstream media.

Barnes continued: “We don’t have the business model to invest in platform innovation, we have to dedicate money into those alternative platforms like the TV industry does.”

Viewed as almost a step backwards, Vice launched a linear TV channel in 2016, Viceland is a millennial-targeted network.

Barnes said it was a strategic move and one that has paid off.

He said: “There is a lot of money to be made in the linear TV business. Going into the TV business has meant we can make more content and get it to a lot of people; TV is another portal for us to innovate and share our media.

“Viceland has generated amounts of money that has enabled hundreds and hundreds of hours of dedicated content specific for our market.”

Speaking in the Alternative Platforms session, AEG Chief Revenue Officer Todd Goldstein said the sports and entertainment company is focusing on the data of personalisation and opportunities to monetise its content offerings through the mobile device.

He explained AEG is trying to harness its data to better serve their customers. Ultimately, it aims to sell virtualised tickets to Taylor Swift or The Rolling Stones for example, with added value before and after the concerts to curate experiences and gain audience data information.

He said: “Incredibly new diverse technologies such as AR, we are still trying to figure it out and how using data for a personalised experience can be monetised for our business.

“Broad strokes of revenue have moved from sponsorship and ticket sales, to linear TV business and now alternative platforms which present an opportunity and a challenge.”

AEG generated billions of hours of content from its Coachella festival. Having partnered with YouTube viewers can now you can watch the festival from wherever in the world they are.