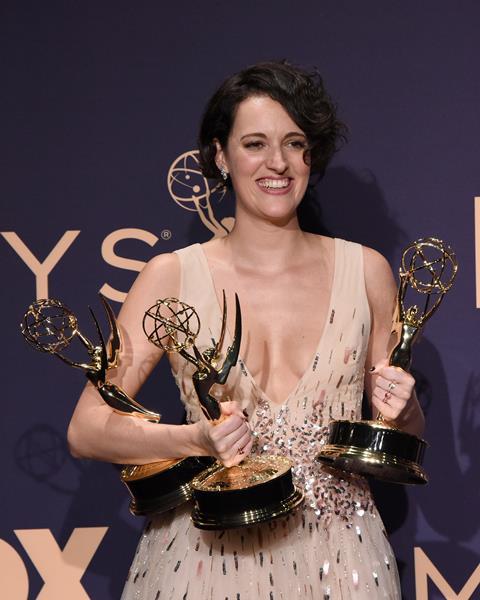 Phoebe Waller-Bridge at the Emmy Awards 2019

A substantial overall deal – reportedly around the $20 million a year mark - has been signed between the two - which will guarantee exclusive content for Amazon Prime Video in more than 200 countries and territories.

The announcement was confirmed on Tuesday and is a timely partnership after Phoebe Waller-Bridge’s Fleabag took home four Emmy Awards for its second season.

Waller-Bridge has also earned praise for creating the celebrated BBC America series Killing Eve, whose co-lead Jodie Comer won the Lead Actress in a Drama award at the Emmys on Sunday.

In a statement, Amazon Studios head Jennifer Salke said: “We are thrilled to be continuing our partnership with Phoebe at Amazon Studios! As evident in her great success at the Emmy Awards this week, she is clever, brilliant, generous and a virtuoso on multiple fronts including writing, acting and producing.

“Fleabag has been a gift to our Prime Video customers, and we are excited for what comes next from this brilliant mind to dazzle and delight our global audience.”

The Emmy award winning comedy began as a one-woman show which Waller-Bridge performed at the Edinburgh Fringe Festival in 2013, before it was adapted for the small screen.

In April, Waller-Bridge made headlines when she was brought on to work on the script for the 25th James Bond movie called No Time To Die.

She joined at the request of Bond star, Daniel Craig who called for her “wit and quirkiness to the screenplay,” according to a report by The Guardian.

On singing the deal with Amazon, Waller-Bridge said: “I’m insanely excited to be continuing my relationship with Amazon.

“Working with the team on Fleabag was the creative partnership dreams are made of. It really feels like home. I can’t wait to get going!”

Speaking last night at the Steve Hewlett Memorial Lecture, New York Time chief executive Mark Thompson discussed the importance of scale and sovereignty across the competing media landscape and pointed to streaming giants who are acquiring creative talent ahead of traditional media.

With big budgets and compelling audience figures, creatives are being lured to such deals and moving beyond traditional media company partnerships.

Thompson said the streamers are driving much of the current consumption of content by audiences with reruns from conventional broadcasting. However, the former BBC director general added: “They’re putting their commissioning dollars into the kind of distinctive, ambitious programming which used to be reserved for premium cable and satellite – HBO or Showtime, say – or indeed the BBC and Channel Four.

“So, it’s not reality shows and soaps, but Fleabag and The Crown. The best US linear players are fighting back with the same: The Terror, Chernobyl, even Game of Thrones.”

Echoing this sentiment was Netflix chief executive Reed Hastings who spoke last week during the RTS Cambridge Convention and pledged an increase investment in UK content.

Netflix had spent £400m in the UK in 2019 and said there would be a “very large increase in how much content is produced here in the UK” next year.