The Royal Television Society (RTS) 2018 Craft and Design Awards have awarded the best in UK broadcast television from directing and effects to costume and make up. 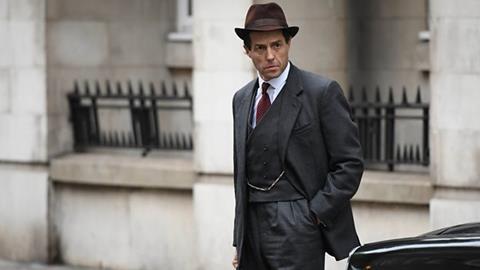 The BBC was awarded across a total of 16 categories with A Very English Scandal and Retreat: Meditations from a Monastery both winning two awards each, while The Windsors Royal Wedding Special from Channel 4 also garnered two awards, bringing the broadcaster’s total number of awards on the night to six.

The Lifetime Achievement Award went to Kathy Schulz in recognition of her professionalism, passion, honesty and loyalty demonstrated throughout her career, as former Managing Director of The London Studios she was commended for her expertise she has provided to the industry.

Craft and Design Awards Chair Lee Connolly said: “The jury has had some extremely hard decisions to make this year, with the range of outstanding programming being made in the UK.”

A category that tests the mettle of the designers, with its low budgets and time pressures, however the costume design was still ambitious, which gave us a fantastic comedic interpretation of a royal wedding, full of sensitivity and imagination with enough of a nod to reality that we instantly recognise the characters but are carried along on their soap opera journey. A fabulous bit of telly!

The jury said, this category was full of wildly differing entries that made for heated debate.  The costume design in the winning programme drew us into two new worlds with a sinister yet familiar feel. Both populated with timeless characterful representations of real and relatable personalities achieved with skilful layering of textures and colour that achieved a cohesive and visually exciting design.

Joanna Eatwell The Miniaturist The Forge Entertainment for BBC One

Visually stunning and incredibly well executed, the jury was blown away by the scale of the project. The virtual characterisation of the actors was incredibly impressive and intrinsic to the success of the drama.

The jury felt this strong narrative themed sequence was beautifully executed. The visuals move from light to dark, the great choice of music descends into a heavy wave of glitches, static, and cymbals which really encapsulates the mood and central character of the show.

Iconic in its approach, ambitious in its scale, unique in its design.  The jury felt that this simple idea was meticulously considered with regard to the animation, the styling of the typography and the detailing of the weaving machine. It was a great canvas for binding together past and present imagery. A real masterstroke.

The director managed to garner stellar performances out of the entire (young) cast achieving a breath-taking combination of profoundly poignant intercut with fearfully funny moments which elevated this material beyond what was simply on the page.

This film stood out for its fearless immedi acy of approach and its confident and totally engaging voice: an exciting directing talent, brilliantly deployed in front of camera too.  Fascinating encounters and brilliant interviews reframed the familiar, by sitting down with and trying to understand the human beings behind the rise of the far right.

Francis Hanly Arena: Stanley and His Daughters A BBC Arena Co-Production with 1212 Productions for BBC Four

James Rogan Stephen: The Murder that Changed a Nation On The Corner in association with Rogan Productions for BBC One

This was incredibly brave – the performances were on the nose – a masterclass in character directing. Luscious and excellent in every way!

Nick Murphy Save Me World Productions for Sky Atlantic

The jury thought the beautifully crafted direction conveyed every nuance of the dance perfectly to the audience.

Astonishing imagery and beautiful editing put this programme into a class of its own and took observational documentary making to a new level. The choice of music, shot selection and pace was pivotal to the ambitious cinematic approach to the storytelling in this outstanding documentary.

An impactful example of the craft of editing, in which the very sensitive use of cutting delivered the viewer right into the emotional heart of the story.

The skill of gag collection as well as a terrific narrative makes this one of the funniest satirical shows on TV. The impeccable pacing and comic timing throughout the editing process is outstanding.

Weaving live music and archive, the jury thought this was a beautifully edited piece with great pacing.  It was as much a skilful music edit as it was a sport piece and told the story very well.  All in all, it was a joy to watch!

One Of Us, Chris Reynolds The Crown Left Bank Pictures for Netflix

The jury found this entry breath-taking in its scale, ambition and achievement. Movie magic brought to the small screen with stunning effects so true to life that you never questioned anything from buildings, boats and planes to the Antarctic. Seamless, flawless and beautifully crafted.

This was felt to be beautiful and realistic. Each shot was expertly crafted capturing the essence of “old masters”. Light and shade captures the atmosphere and being comedy it was careful not to miss any facial expressions!

A huge number of amazing entries with vastly different budgets and subjects made it incredibly difficult to judge one against the other.  In the end it was the absolutely perfect translation of classic to contemporary that won the jury over. A breath-taking adaptation supported fabulously by the make-up design.  Each character was delivered with a skilled but gentle simplicity raising the visual pathos whilst allowing the tragedy of the story to play out.

This is a genre not for the faint hearted, tight deadlines and budgets with make-up teams pushed to achieve ever more fabulously entertaining characters at high speed.  The combination of great skill and sheer bonkersness won through here. It was a fantastic recreation of two iconic characters and shows skilfully how hair and make-up can enhance and support comedy.

A monumental task realised with feeling which completely summed up the mood for the millions of viewers. Subtle use of camera moves, perfect timing and not over cut. Perfect depth of field in the close ups, and stunning wide and super wide shots.

This was great coverage, good use of technology with helicopter and radio cam on bikes. London’s landmarks featured well to give a great geographic sense of being there.

A simply brilliant score that perfectly pitched the humour and pomp with light and shade to deliver an emotional soundtrack that was cool, catchy and very charismatic.

The jury said this title score was cool, fun, bold and brassy. A high tempo introduction that grabbed you and made you want to watch!

Here the jury were faced with the impossible task of comparing exquisite and unparalleled efforts to showcase nature, with impossibly charming and characterful human connection, with a series which seemed to transcend the form as it created a uniquely experiential narrative - one to which its sensitive and evocative photography was both formative and indispensable.

In a remarkably diverse category, both in terms of budget and tone, the jury hotly contested but swung eventually to a show that is outstandingly fresh in vision and execution, and sleight-of-hand clever in its creation of an immersive and compulsively watchable world.

The jury highly commended this documentary for a grade that felt cinematic and beautiful, adding immensely to the emotion and mood of the film. Astounding work. Powerful, stand out and with huge impact.

The jury said these were bold, atmospheric and confident designs which were very well executed, with an excellent attention to detail and dressing.

A beautifully executed transformation of this existing location, with the flexibility to change looks for each performance over many weeks.

The sound was dramatic, visceral and seamlessly-mixed, with nothing out of place.

This programme, so simple in concept, keeps our attention in large part because of the fantastic sound, so comprehensively captured and creatively mixed.

Lee Connolly, Chair, Craft & Design Awards said: ”This year’s Lifetime Achievement Award goes to someone I bet everyone in this room will know, will have encountered, and will have benefited from her unwavering professionalism, passion, honesty and loyalty.

Professionalism, because of her unique understanding of the business and her drive to be the very best.

Passion, for her genuine love and affection for this industry of ours.

Honesty, for never letting client or crew down, despite huge pressures.

Loyalty, for her desire to maintain relationships built on trust and transparency.

This person started her career in broadcasting at the BBC before moving on to ITV and it was at ITV where she would make her mark. Starting as a graduate engineer and editor across sport, entertainment and current affairs. Then onto client liaison as the critical link between programme makers and production facilities and crew, before eventually becoming Director of The London Studios and ultimately Managing Director.

Literally thousands of hours of programmes. The very biggest shows, sitcoms, entertainment, sport, current affairs, kids tv, music…the list of shows is so huge we’d be here all night. But you’ll all know them, many of you will have worked on them, and will have benefited from what this person made happen, often against the odds.

There was nowhere in the world like The London Studios and this was largely because of the person we are honouring tonight.

The way in which she handled the closure earlier this year with such dignity and respect underlined why she was only ever the right person for the job.

The last ever live show was Saturday Night Takeaway, a bitter sweet celebration really, but a show that epitomised TLS and this person’s work.

The Studios may be gone, but the person who made them what they were hasn’t. She has moved on to pastures new, something she can tell us about now maybe, because one thing is for sure, we need her in our industry.”