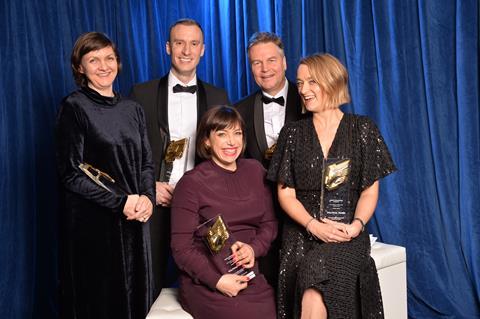 The BBC was the clear winner at last night’s Royal Television Society (RTS) Television Journalism Awards, scooping ten of the 19 categories across news and current affairs.

The broadcaster’s Newsnight Prince Andrew interview special picked up two awards, for Interview of the Year and Scoop of the Year, while interviewer Emily Maitlis won Network Presenter of the Year.

The BBC was followed by Sky News which triumphed in five categories, including the inaugural Digital Award which was bestowed on the broadcaster for its Snapchat Discover and YouTube piece ‘Why are transgender people self-medicating?’.

Chair of the RTS Television Journalism Awards Simon Bucks described the standard of entries as “exceptional”. He said: “I would like to congratulate not only the winners and nominees but all the entrants whose work represents the very best of the UK’s television and video journalism. The decision to give the Judges Award to all the broadcast political teams is an important recognition that over the past year, they have been subjected to unprecedented pressure and abuse, for only doing their jobs.”

BBC News, which recently announced a raft of cuts, will no doubt be buoyed by the wins having been on the receiving end of a barrage of criticism in recent months – particularly in relation to its Brexit coverage.

Commenting on the Judges Awards, the RTS team said that “the divisions of Brexit put unprecedented pressure on political journalists. Many suffered abuse and threats.

“In addition – as Adam Boulton wrote recently – relations between the media and the political class are being increasingly challenged as politicians by-pass journalists, preferring instead to put their messages out directly.

“Against this background, the judges decided that the RTS should recognise all the political teams across all the UK broadcasters for their important role as guardians of democracy.”

“The judges were very impressed by the strength of the entries in this category. However, the winner won special praise for its gripping coverage of a dramatic unfolding story. The judges said it was a triumph of pre-planning, field production, and brilliant live reporting combined with exemplary use of technology.”

“Once again the jury commented on the quality and diversity of the entries with great technical skills on show. The winner managed to apply outstanding film-making techniques to an unfolding and unexpected environment. Add to that, bravery to tell the story despite on-going and real threats to personal security.”

WINNER - Spotlight on The Troubles: A Secret History BBC NI for BBC Four and BBC One Northern Ireland

“This year there were an exceptional number of outstanding entries in this category and even reaching the shortlist was not easy. The winning entry demonstrated both brilliant storytelling and wonderfully evocative film making. It was a complex story that was well pulled together and included stunning new revelations. Altogether a great piece of investigative journalism.”

“The judges felt this year’s entries were very strong, and they were spoilt for choice in this category. All the shortlisted projects were brilliant, but there was little disagreement about the winner. An outstanding film, the judges thought the filmmaker told her story, combining the intimate with the macro, with breathtaking courage, stamina and determination. Already a winner of many awards here is another.”

“This category attracted entries from several genres of daily news programmes, giving the jurors the hard task of comparing extremely strong examples of programmes concentrating on important social issues against others which stick to a more mainstream agenda. All the nominees were praised for some remarkable examples of original journalism. The winner covered all the major news stories with consistent rigour and originality as well as making headlines with a scoop. However, its hallmark was its focus on political coverage underpinned by first-class interviewing by its presenters. The jury agreed the programme had made itself – once again - required viewing.”

News at Ten ITN for ITV

WINNER - Why are transgender people self-medicating? Sky News for Snapchat Discover and YouTube

“This was a new award for the RTS and we were happy to see so many submissions. The winning entry was commissioned for the vertical storytelling platform Snapchat and stood out from its competitors for its revelatory journalism told through powerful case studies. More than 1.55m people, mostly under 35s, have watched the film.”

“This was an unprecedented interview demonstrating enterprise, thorough preparation and was full of the unexpected. The questioning was forensic and the programme demonstrated fine journalistic skill which had a huge impact.”

Harry and Meghan: An African Journey – Duchess of Sussex ITN Productions and ITV News for ITV

“Here was a brilliant piece of investigation that was meticulously researched, and which not only gained surprising access to police files but also used it to pursue police failures and cover ups. The jury found the programme both electrifying and chilling. Remarkably, a tenacious, dogged reporter made more progress on a murder enquiry than a police force – an extraordinary feat that is a shining example of what exceptional journalism can achieve.”

“The winning programme competed in a very strong field. What stood out for the judges was the exceptional investment in a great regional news story that was a technical triumph as well. The reporting featured a number of exclusives. It made for a compelling watch that skillfully captured the psychological and emotional effects of the worst tragedy of its kind in more than 60 years.”

“Some of the measures of a highly skilled regional presenter include how well they’re able to connect with viewers; a discernible knowledge of their area; and someone who might display easy charm but knows how to ask bold questions and handle awkward situations. Our winner has all this, and it stood out. The jury appreciated the flexibility, sparkle and thought that had evidently gone into every piece they were doing and the authority that they conveyed.”

“Some tremendous performances graced this year’s entries. The nominated candidates demonstrated empathy, range and tenacity. The judges were impressed by their ability to present a breaking news story one day and carry out a sensitive and intimate interview on another. But the winner was seen by the judges to have had a stand-out year. In a year of political chaos, her nose for nonsense led to bruising encounters with politicians and her interview with a member of the Royal family will live on in history.”

“This was a very hotly contested category. In a year when the UK news agenda was dominated by a colossal domestic, political story the nominees were also praised for the breadth of their non-Brexit output They all featured strong coverage of the environment and climate change, as well as in-depth reporting of major, often shocking, events from Syria and Sri Lanka to New Zealand and Hong Kong. In a tight vote, the winner was the channel which the jurors said displayed the greatest range and most enterprise and innovation – on the ground and indeed underwater.”

WINNER – The Death of Molly Russell – BBC News for BBC One

“The judges were very impressed with this entry, giving it ten out of ten and agreed it ticked all the boxes for a top award. It showed creativity, excellent scriptwriting and innovation. The entry was described as very much of our time.”

“This was an intensely competitive category with many highly-compelling submissions. The winner fully captured a story that every broadcaster was chasing. The team secured great access in a challenging environment. With great story-telling and global impact.”

The Migrant Crisis: Death on the Channel – ITV News ITN for ITV

“The winning entry represented an innovative step-change in broadcast technology. At a time when climate change is our biggest story, the ability to present live, 300 metres below the Indian Ocean completely untethered, brought new insights and perspectives on the damage being done to our seas. This project with its pioneering technology was almost a year in the planning.”

“This world exclusive was making headlines even before it was broadcast. Clips were running, it was on every front page and it was already clear that this amazing interview was going to cause major ructions for at least one member of the Royal Family, even though we knew he wasn’t sweating about it(!)”

“Rohit has had an extraordinary year and has really made his mark. He is tough when he needs to be and has a fantastic portfolio of exclusives that anyone would bite their opponents’ legs off to get. In a fine field, Rohit’s work stood out above all the others.”

“The standard of entries in this category was as high as it has ever been and each of the nominees would have been a worthy winner. In the end, the judges went for a journalist who demonstrated an unmatched range of investigation, eye-witness reporting and courage with sparkling writing and the ability to find themselves at the centre of a story.”

“Martha has established herself as a leading broadcast sports correspondent – a beat dominated by men – through bringing hard-edged and investigative skills into an area where they are rarely seen. She gets beneath the sports headlines to underlying issues and has built an enviable track record in breaking stories as a result. She has brought fresh perspectives to sport and pursued them with unusual skill and energy.”

“The divisions of Brexit put unprecedented pressure on political journalists. Many suffered abuse and threats.

In addition – as Adam Boulton wrote recently – relations between the media and the political class are being increasingly challenged as politicians by-pass journalists, preferring instead to put their messages out directly.

Against this background, the judges decided that the RTS should recognize all the political teams across all the UK broadcasters for their important role as guardians of democracy.”

“This year [the Judges’ Award] goes to a towering global figure in English speaking broadcast journalism, a doyenne of international television presenters.

She was born in London, raised in Tehran, educated at a convent in Buckinghamshire before university in America.

She began her broadcast career while still an undergraduate. Over four decades she has covered more or less every major conflict and interviewed pretty much anyone who is anyone. She is a committed campaigner for media freedom and the safety of journalists.”