BBC R&D has been working on second screen synchronisation technology that aims to ease navigation.

With enabling support from HbbTV 2, and presentation support from the middleware specialist Opera TV, BBC R&D hopes to make it easier for viewers to glide between TV and the internet and back again with one or two clicks.

Talking about companion screens and measuring the accuracy of synchronisation, BBC R&D Senior Research Engineer Matt Hammond said: “A lot of the work is about trying to put in place bits of technology that will make it easier to create a joined up experience, where the user does not have to care much about whether they are watching something online or something via broadcast.”

Armed with a tablet, and facing a TV running an internet of stream of a natural history show, Hammond introduced a specially written tablet app.

“Now we have implemented the standard, this can find it on the home network automatically, so there is no logging in or pairing codes. One touch and you have got connection to the device,” he said.

“So the next thing, using these open standards, is communicating with the TV, to find out what is showing and the time position in that program, so the app is able to synchronise with it.” 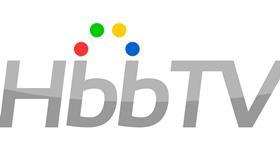 The worldwide initiative is “aimed at harmonising the broadcast and broadband delivery of entertainment services to consumers through connected TVs, set-top boxes and multiscreen devices”.

HbbTV allows for the delivery of interactive services over broadcast and broadband networks through an internet-connected TV or set-top box.

As well as the companies listed above, the 76 members of the HbbTV organisation include Arqiva, Deutsche Telekom, Red Bull Media House, Ericsson and ITV.

The TV and the tablet played the same video, and any delay is measured within 10 milliseconds for the sound and comfortably within a frame for the pictures. This though was a technical demonstration.

“You might well ask what that is useful for,” said Hammond (pictured).

“One possibility here is you want to take your viewing with you out of a room, without a break like having to stop one device and start the next. This is seamless as a transition; the sound is synched up, the pictures are synched up, and users can move rooms in their house and keep watching without interruption.” 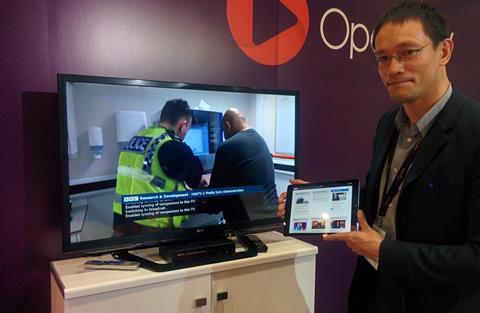 Once the specs of HbbTV 2 could be tested and implemented, the BBC prototypes needed commercial exposure.

“We have been putting out feelers to a variety of manufacturers for some time,” said Hammond.

“We were involved in writing the new HbbTV specs, so we have a good understanding of how we can help. Opera was the first to bite and say it would love to work with us to get the features implemented.”

The specification for HbbTV 2 was released in early 2015.

According to the organisation, “HbbTV 2 builds on the success of the previous version of HbbTV with additional new features that bring value to consumers, broadcasters, pay TV operators and OTT video providers alike.

“These include features such as seamless viewing of video content across TVs and mobile devices, standardised delivery of Ultra HD content with HEVC, improved accessibility of services and enhanced support for dynamic ad insertion.”

Hammond says HbbTV 2 was vital. “There was a long road here from writing a standard through to it actually appearing in devices. I think that a strategic decision has been made at the BBC to say that we have had digital TV and interactive platforms for a long time.

“The technologies [we previously had] are quite old, so we want to make a big leap,” he added.

“HbbTV 2 will actually give us a really big future proof step rather than trying to make small, incremental changes all of the time.”

BBC R&D has been heavily involved in building the testing and compliance regime to help vendors ensure their displays adhere to the specification. Broadcasters also need to know that the services they create will screen on all TVs.

“Take a platform operator like Sky, Freeview or Freesat; for them to want to adopt something they must have some confidence that the TV vendors are ready to sell models with the smart screen features inherent,” said Hammond, who demonstrated the technology at the TV Connect event.

“Those vendors pull in components from lots of companies, and Opera is a supplier of the HTML and JavaScript environments in which HbbTV apps run so it makes sense for us to work with people who are ready to bring things to the next step along that pipeline.”

For BBC R&D’s demonstration, the emphasis was on the relationship between two devices.

“This is specifically about making sure that the TV has the ability to interact with other devices. If we are building apps for phones or tablets, we have got more control over what we can do in that environment,” said Hammond.”

In the demo, the tablet detected that the big screen was showing broadcast content to launch an app to provide more information about the content being viewed. 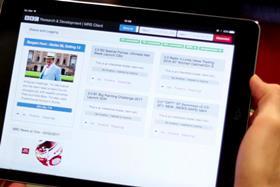 BBC R&D: the science of synchronisation

“It takes knowledge of what’s on the screen but then we are supplementing it with other data we have pulled from the internet, from the BBC’s website,” said Hammond. “It is not much of an extra step to say you could have links to that recipe you were just hearing about, without having to go and Google it.”

Another function could be to recognise when trailers are being played to provide a viewer with the option of bookmarking a programme and informing them when it is available on iPlayer.

“We are making it easy for people to find stuff and get back to the program: we are bringing people from what’s on the TV screen to the internet, to apps, and also bringing them back the other way,” he added.

“There are little building block features within HbbTV 2 that allow us to build these kind of experiences.”