BBC Studios is now poised to take on the might of the SVoDs while firmly focusing on British IP according to its Chief Executive Tim Davie, who addressed IBC delegates during Thursday morning’s opening keynote. 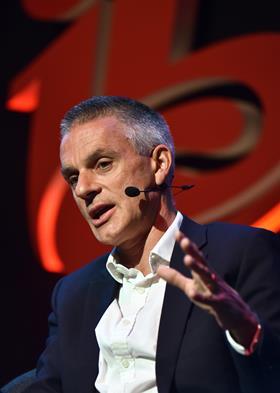 With its distribution arm now merged with its production arm and seventeen production companies to its name, Davie described the broadcaster’s content unit as a “big small” global player.

“You can feel very big in your own pond but the game has completely changed,” said Davie, who stressed that BBCS is “driven by British creativity.”

BBCS’s focus on British IP means that it will not be making a bid for Endemol Shine – something that Davie flatly ruled out when asked by session moderator Kate Bulkley.

“We will not be buying Endemol. We are very focused on premium British content and are already suitably scaled in certain areas.,” he said.

Now that BBCS’s new structure is in place, its focus is firmly on making hits, which in scripted can cost, according to Davie, around “$5-$10M per episode”.

Forthcoming dramas include His Dark Materials, based on the Philip Pullman novels. HBO has just boarded as co-producer of the fantasy drama, and has taken worldwide rights outside the UK.

According to Davie, getting such projects off the ground requires smart and creative deal making, a willingness to be quick to market and solid financial backing.

“When you are securing these big deals now you really have to be flexible about the structure. It’s all about creative deal making rather than pure programme distribution,” he said.

Earlier this week, BBC boss Tony Hall warned that British broadcasters are having to find new partners to co-fund high-end drama because the big SVOD players are moving away from scripted co-production deals in favour of global deals.

“If you don’t have capital and financial muscle in the areas you want to win in then you are in trouble,” he said.

“You can’t sit on projects anymore because the power balance has moved. I would say to the Europeans in the room – unless you have the ability to act on your instincts around big creative projects now then you’ve got a problem.”

The Anton Corporation was also instrumental in helping BBCS fund a new multi-genre short form content fund, which Davie announced during his keynote.

Davie said the budget for the fund – which is being run by its 48% owned indie Clerkenwell Films - was “significant”, but he would not reveal the exact amount.

Elsewhere in the session, Davie announced that Britbox – BBCS’ US SVoD joint venture with ITV – had passed the 400,000 subscriber mark within 18 months of launch. He hopes that the service will pass half a million subscribers by its second birthday.